No. 2 Pearl River splits top-10 showdown with No. 8 Meridian 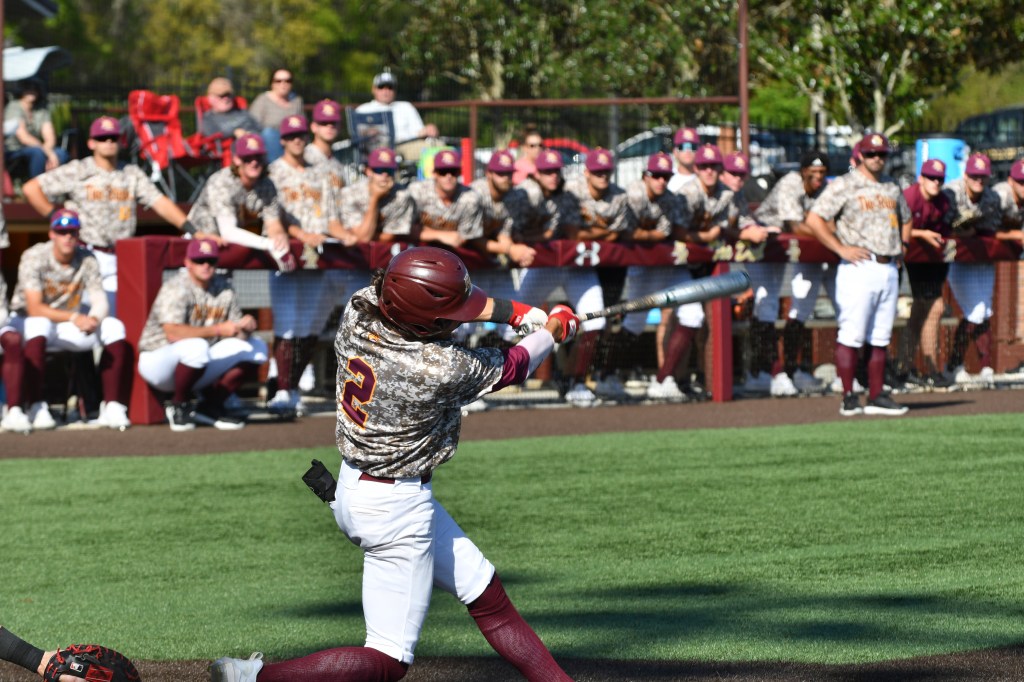 POPLARVILLE, Miss. — The NJCAA top-10 matchup between No. 2 Pearl River and No. 8 Meridian proved to be the battle that everyone expected. The Wildcats claimed an emotional game one victory 5-3 before falling in the nightcap 8-5.

“It’s a good split. Credit to them in game two. That arm was really good,” head coach Michael Avalon said. “I thought we had some early opportunities in game two and didn’t cash in and I figured it would cost us late. We did what we had to do today getting the split. It was a good win in game one and a tough one in game two.”

Pearl River (29-9 overall; 17-5 MACCC) sent out Turner Swistak (Hattiesburg; Oak Grove) to face the Eagle lineup. The right-hander worked through the first two innings unscathed to put his team back to the plate in the third inning.

D.K. Donaldson (Gulfport; West Harrison) and Taylor Woodcock (Pass Christian; West Harrison) each drew a walk to start the inning and Gabe Broadus (Wilmer, Ala.; Faith Academy) loaded the bases with a bunt single. John Griffin Bell (Mobile, Ala.; Faith Academy) then turned on an inside pitch and poked it over the head of the shortstop for an RBI single. On the very next pitch, Tate Parker (Gulfport; West Harrison) drove a fly ball into right field for a sacrifice fly. Broadus then came around to score on a wild pitch, giving the Wildcats an early 3-0 lead.

The Eagles (25-11; 13-7) were able to get a pair of runners into scoring position in the bottom of the fourth inning, but a big punchout from Swistak sent them back to the dugout.

An insurance run was added by the Wildcats in the bottom half of the frame. Woodcock got the inning started with a leadoff single and promptly swiped second base. After a deep flyout, Woodcock tagged and advanced to third base. Bell walked on four straight pitches and then a Parker fielder’s choice made the score 4-0.

The sixth inning saw the Eagles cut the deficit in half, hitting a two-run homer to make the score 4-2.

Despite the tough inning before, Swistak took the mound again in the seventh. The decision paid off for the Wildcats as he induced a groundout and struck out two batters.

Bell grabbed a much-needed insurance run for the Wildcats in the eighth inning. The shortstop turned on the first pitch that he saw and sent it over the left field wall to make the score 5-2.

The Eagles scored on a wild pitch in the bottom of the eighth to slice into the lead once again, 5-3. In the ninth inning, Meridian loaded the bases, but Cole Tolbert (Laurel; West Jones) was able to force a fly out to end the contest.

“Turner was good today,” Avalon said. “His velocity in the seventh inning was still as good as it was in the first inning. That’s what we needed. He gave us a good start and we need him to do that again next time out.”

Tolbert earned the save by throwing two innings allowing three hits, one unearned run and two walks while striking out two batters.

The Wildcats again took the lead first in the second game of the day, going ahead 1-0 in the second inning. Perry drew a walk and eventually came around to score on a groundout by Preston Soper (Madison; Germantown).

Meridian snatched their first lead of the afternoon soon after on a three-run opposite-field homer, taking a 3-1 advantage. MCC then added an insurance run in the third inning to extend its lead out to 4-1.

PRCC cut the deficit to two runs in the fifth inning. Woodcock drew a walk and came around to score on a Bell single, making the score 4-2.

Meridian put up a four-spot in their half of the fifth inning to build out an 8-2 lead over the Wildcats.

Pearl River didn’t go down quietly in the seventh inning, plating three runs. Donaldson led off the inning by blasting the 2-2 pitch over the left field wall to make the score 8-3. A few batters later, Parker took the first pitch of his at-bat deep for a two-run shot. His 14th blast of the year put him back into first on the NJCAA leaderboard and made the score 8-5. The final out of the night was almost taken out of the ballpark but was caught near the warning track to end the game, 8-5.

Bell led the way offensively with two hits and an RBI. Parker finished with a hit and two RBIs.

The Wildcats hit the road Saturday for a matchup with Mississippi Delta. The games are set to get underway at 2 p.m. and will be livestreamed at MDCCTrojans.com. The game can also be heard at WRJWRadio.com.