No. 2 Pearl River moves within one game of MACCC title 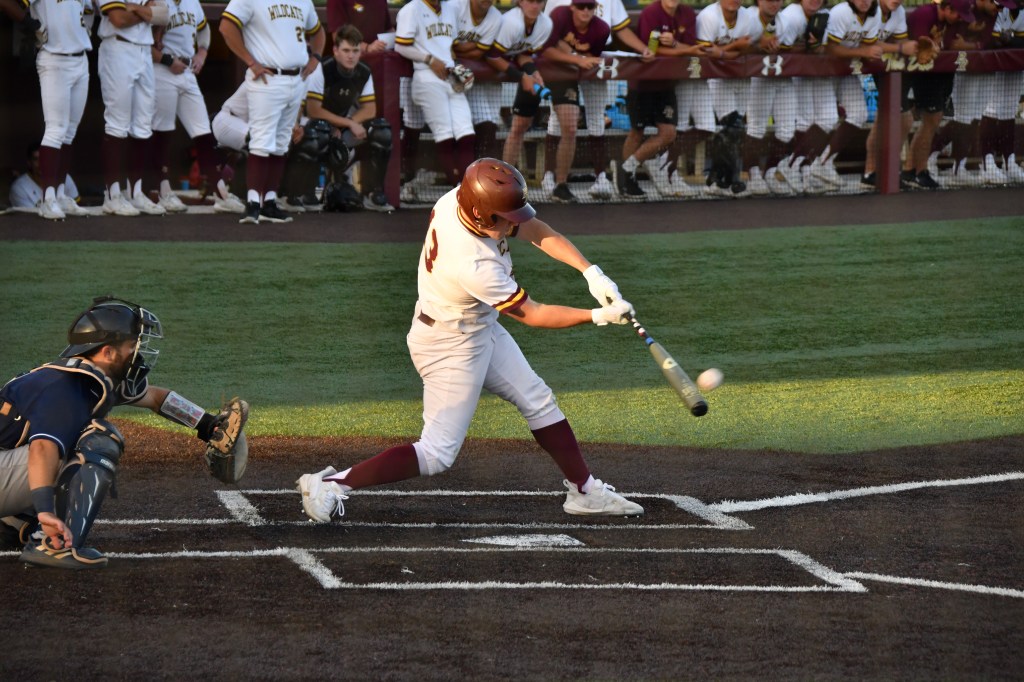 POPLARVILLE, Miss. — The No. 2 Pearl River baseball team moved one step closer to clinching the MACCC title Tuesday after sweeping Southwest on sophomore night. The Wildcats took game one 9-5 before run-ruling the Bears 14-3 in game two.

PRCC’s magic number is now down to one and the Wildcats can clinch the MACCC title with a win on Friday against Northeast.

“They did a really good job of barreling balls up,” Pearl River coach Michael Avalon said. “A lot of credit to them. The big thing was that I didn’t see the run total keep going up. I knew we had a chance if we could get going. Thankfully our guys picked up the slack and that momentum carried over into game two.”

It was Pearl River (33-9 overall; 21-5 MACCC) who claimed the lead first. Matt Mercer (Richton; Petal) walked on five pitches to open the inning. After a Wildcat out, Logan Walters (Petal) stepped into the batter’s box and blasted a hanging breaking ball over the right-center field wall for a two-run homer.

The Bears extended their lead in the fifth inning, using back-to-back doubles to push across a run and make the score 5-2.

Pearl River did damage with two outs in the sixth inning to cut the deficit to one at 5-4. Preston Soper (Madison; Germantown) drove a ball the other way for a single to bring home the first run of the inning. After a John Griffin Bell(Mobile, Ala.; Faith Academy) single, Gabe Broadus (Wilmer, Ala.; Faith Academy) lined one right back where it came from for an RBI single.

The Wildcats took the lead for good in the seventh inning. Alex Perry (McComb; North Pike) lined a ball down the left field line for a leadoff double. Ian Montz (Lafayette, La.; Acadiana) was then plunked by a pitch. D.K. Donaldson(Gulfport; West Harrison) then drove the ball off the left field wall for a two-run double and 6-5 lead. Walters then singled, forcing a Southwest pitching change. Soper greeted the new pitcher nicely, belting his first pitch over the left field wall for a three-run home run. The blast made the score 9-5.

Will Passeau (Mobile, Ala.; St. Pauls) pitched a quick top of the ninth to seal the 9-5 victory for the Wildcats.

Passeau earned the win after four incredible relief innings. The right-hander allowed just one hit and one walk while striking out six batters.

“That’s what that kid is capable of. There’s a lot of potential in him. That’s what we expect and his stuff is electric. Hopefully this gets him some confidence as we finish down the stretch. He was really, really good today.”

Broadus, Donaldson, Walters and Soper all had two hits. Soper led the way in RBIs with four. Parker drew a pair of walks.

Bell made one of the defensive plays of the year in the top of the first inning. The Bears popped a ball into no man’s land and Bell broke immediately from his position at short, sprinting deep into foul territory before laying out to make the catch and end the inning.

Pearl River came out of the gate on fire in game two, plating an incredible 10 first-inning runs. Bell was walked to open the contest. Broadus and Parker then loaded the bases with a pair of singles. The first run scored when Perry was hit by a pitch. Bases loaded walks from Montz and Donaldson then brought the next two runners across the plate, making the score 3-0. A ball off the bat of Mercer was misplayed by the third baseman, allowing another runner to score. In almost identical fashion to his home run in the first game, Walters crushed a hanging slider over the left field wall for a three-run homer and 8-0 Pearl River lead. After Broadus reached base on a single, Parker went down in the strike zone to hit a two-run homer over the wall, pushing the lead out to 10-0. The blast was Parker’s 15th homer of the season and pushed him into a tie with Simon “Meaux” Landry for career home runs with 33.

“I think that Meaux would be okay with him breaking it,” Avalon said. “They are both really good players and two of the greatest to ever come through here. I’m excited for him and he’s a special player. I look forward to him breaking it.”

The Wildcats put up a four-spot in the third inning. Broadus, Parker and Perry got on base to load things up for Montz who crushed a breaking ball over the right field wall for a grand slam. The homer made the score 14-0.

The Bears added three runs in the top of the fifth, but were unable to scratch across anymore. The Wildcats claimed the game 14-3.

Leif Moore (Biloxi; St. Martin) pitched three innings without allowing a run. He struck out one bater. Harper Jordan(Hattiesburg; Presbyterian Christian) threw 2/3 of an inning, walking one. Mason Smith (Laurel; Northeast Jones) struck out the only batter that he faced.

Broadus and Parker tied for the team lead in hits with three. Montz had two hits and led the team in RBIs with five. Walters was second with three RBIs.

Pearl River returns to action Friday in its regular season finale against Northeast. The doubleheader is set to get underway at 2 p.m. and will be livestreamed at NEMCCTV.com.