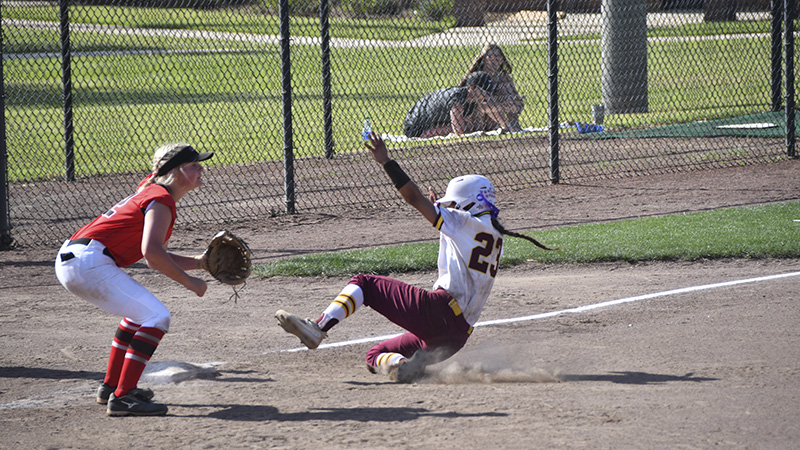 POPLARVILLE, Miss. — The No. 10 Pearl River softball team ran its winning streak up to six games on Saturday by sweeping the Mississippi Delta Trojans, winning game one 2-0 and game two 6-1.

“I’ve been very proud of them the last couple of weeks by staying focused with all the things going on like finals, practice, and trying to finish out the season,” head coach Christie Meeks said. “Today was a different kind of heat than we have played in lately, but they stayed focused and kept the energy high in the dugout and on the field.”

Pearl River (27-14 overall; 17-7 MACCC) opened the scoring in the bottom of the first as Taelor York (Choctaw; Clinton Christian Academy) led off the inning with a walk then came around to score after Julianah Overstreet (Vancleave) chopped a single over the head of the Trojan (10-28; 5-17) third baseman.

The Wildcats increased the lead in the second after a passed ball scored Cassidy Cartwright (Poplarville), setting the score at 2-0.

From there, a pitcher’s duel ensued with Brinson Anne Rogers (Statesboro, Ga.) continuing to build on her incredible season. The right-hander tossed an immaculate inning in the fifth, striking out the side in order on nine pitches.

Rogers shut down the Trojans in the seventh to preserve the lead and give the Wildcats a 2-0 win in game one.

Rogers tossed a complete game, allowing no runs on one hit. She struck out 14 batters.

Overstreet led the way in game one with one hit and an RBI.

Game two started as a pitcher’s duel with both pitchers working themselves out of a few tough jams for the first 3 1/2 innings.

Miller got things started for the Wildcats in the bottom of the third by lining a ball between the third baseman and the shortstop for a single. Shortly after, Overstreet blasted a pitch on the outside part of the plate over the center field wall for a two-run home run to give Pearl River a 2-0 lead.

The Trojans threatened in the fourth by getting the tying run to second, but Hannah Embry (Vicksburg; Porter’s Chapel Academy) struck out the next batter to get out of the jam.

York opened the bottom of the fourth by reaching on an error and getting to second on the play. Dallyn Nance (Nanih Waiya) drilled a single down the left field line to score York from second to increase the lead 3-0. Miller drove a single into left-center field to score Nance from second, extending the Pearl River lead out to 4-0. Miller also advanced to second on the throw into the infield. After Miller stole third, Payton Lee (Picayune; Pearl River Central) demolished a pitch up in the zone over the seats in left field for a two-run home run, blowing things open in favor of the Wildcats 6-0.

The Trojans rallied to score a run in the top of the seventh, but Embry was able to limit the damage by inducing a groundout to give Pearl River the game two 6-1- victory.

Embry pitched a complete game, allowing one run on six hits. She struck out six.

“I’m proud of our pitching stay for staying consistent because that is not easy to do in this league and they are doing a great job of staying constant game in and game out,” Meeks said.

Miller led the way offensively in game two with two hits, two runs scored, and an RBI. York pitched in with two hits of her own and also scored a run. Lee and Overstreet both finished with a hit and two RBIs each.

“Coach Sparks and I both talked about how Payton and Julianah are both seeing the ball really, really well, almost like a beachball,” Meeks said. “No matter what is being thrown at them, they are seeing it well and we are just letting them swing the bat.”

Cartwright and Jena Pacheco (Vancleave) both collected a hit.

The Wildcats hit the road on Tuesday for a 3 p.m. matchup with Southwest. The doubleheader will be livestreamed at Go.SMCCBears.Tv