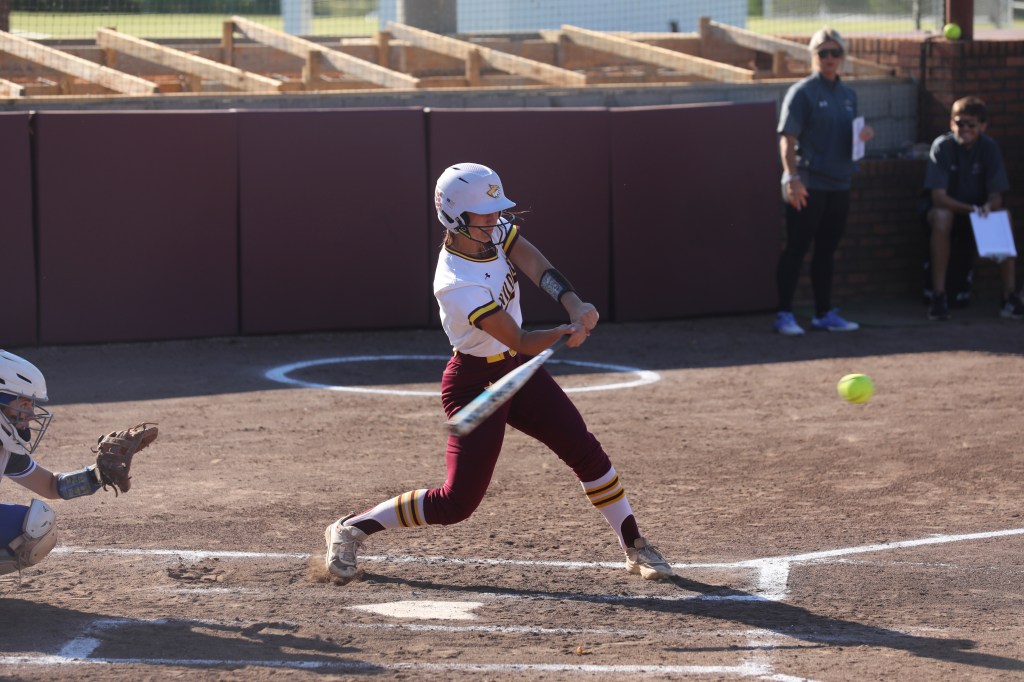 POPLARVILLE, Miss. — The No. 10 Pearl River softball team was fueled by the long ball in Wednesday’s doubleheader against Meridian at Wildcat Stadium. The Wildcats belted five homers to take game one 9-1 and game two 3-2.

“I am super proud of them,” head coach Christie Meeks said. “We have worked super hard offensively and defensively to try and get us back into the swing of things. I really thought it came together in game one.”

The Wildcats answered in the bottom of the third after Julianah Overstreet (Vancleave) lined a ball off the wall, allowing Dallyn Nance (Nanih Waiya) to cross home plate. Overstreet came around to score moments later on an Eagle error. Later in the inning, Emily Rigney (Waynesboro; Wayne County) chopped a ball to the third baseman that brought home Cassidy Cartwright (Poplarville). Jena Pacheco (Vancleave) scored a few moments later on a passed ball giving the Wildcats a 7-1 lead.

The Wildcats added two more runs in the fourth courtesy of Cartwright’s first home run of the season setting the score at 9-1.

The Eagles were unable to manufacture anything in the fifth, giving Pearl River a 9-1 run-rule victory in game one.

Brinson Anne Rogers (Statesboro, Ga.) got the start in game one and pitched all five innings. She only allowed one hit and struck out eight.

Lee and Cartwright led the way offensively with three hits each. The pair both collected two RBIs and scored two runs of their own. Miller and Overstreet both finished with a hit and an RBI each. York, Nance, and Pacheco all finished with a hit.

Pearl River opened the scoring in game two as Lee deposited a ball over the centerfield wall.

Lee kept her fine day going in the fourth, stepping to the plate and crushing her third home run of the doubleheader deep over the left field wall to increase the lead to 2-0.

The Eagles responded immediately in the fifth with a solo home run of their own, cutting the deficit to 2-1.

The Eagles tied the game 2-2 in the seventh on a wild pitch, forcing Pearl River to come to the plate for the bottom half of the inning with a chance to walk it off.

Overstreet stepped up to the plate after two quick outs and worked herself into a 3-1 count before blasting a pitch that was up in the zone over the centerfield wall, walking things off for a 3-2 Pearl River victory.

Hannah Embry (Vicksburg; Porter’s Chapel) got the start in game two and tossed 6 1/3 innings. She allowed two runs on five hits and struck out five. Rogers got the final two outs in the seventh.

“I believe you pitch together as a staff, and I think that’s what we’re doing right,” Meeks said. “All of our pitchers are working really hard, and down the road, there will be multiple times where we have to use the whole staff and they are doing a great job of working together.”

“She’s focused at practice and I think she’s worked herself up in the lineup all year long,” Meeks said. “We’ve seen this kind of success in practice and it’s great to see it on display in games.”

Overstreet finished with a hit and an RBI.

“Julianah is the heart of a team,” Meeks said. “We need her and she’s truly a great kid, not just as a player but a teammate as well.”

Miller, Pacheco, and Cartwright all finished with a hit each.

The Wildcats return to action on Saturday against Mississippi Delta. First pitch at Wildcat Stadium is set for 1 p.m.

All home Pearl River softball games are livestreamed for free at PRCCMedia.com/gold. Fans who have Roku, Amazon Fire or Apple TV devices can also watch the Wildcat broadcasts by downloading the “Pearl River CC” channel from their app stores.

No. 2 Pearl River splits top-10 showdown with No.…