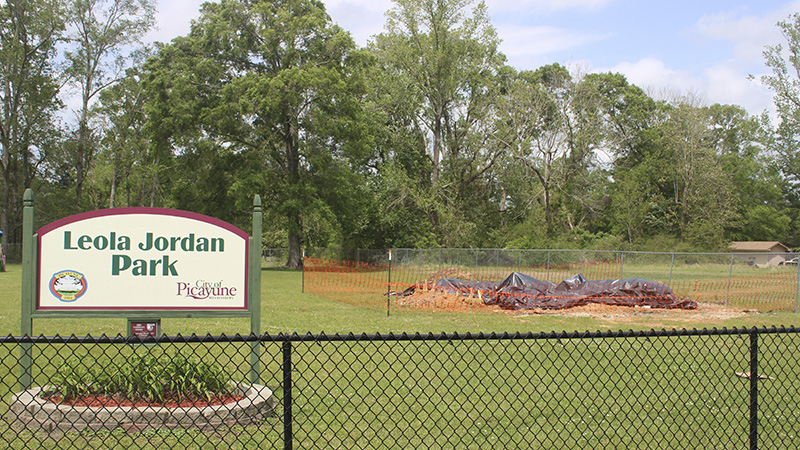 Safety netting surrounds the site where a new restroom is being built at Leola Jordan Park, located on East Canal Street in Picayune. Photo by David Thornton Jr.

The city of Picayune has started construction of three restrooms with funding and assistance from a Lower Pearl River Valley Foundation grant. The grant provides $102,086 in which one bathroom will be placed at Leola Jordan Park.

The remaining two will be constructed at Friendship Park but will be funded by another grant. A concession stand will be added to Friendship Park and include one of those restrooms. The new facility will be placed by the T-ball field and is funded by the BP Gulf Coast Restoration grant, in which the city received $1.9 million for major project improvements.

“It is one thing we wanted to add over there, because there wasn’t anything in that area and the closest restroom was roughly over 100 yards away and so the Council and mayor just felt they need to make it a priority in adding that for the children,” said Parks and Recreation Director Trevor Adam.

This grant will also fund the installation of artificial turf fields, a tennis court and another area for soccer teams to play at Friendship Park. Bidding of the artificial turf is underway and the construction will begin on June 1.

The city will also install security cameras this next week at Friendship Park to help prevent vandalism. Signage warning people against littering and vandalism is expected to be installed next week.

A completion date for the restrooms was expected to in July but June 1 is the new target.

The city is planning to have a ribbon cutting for Leola Jordan Park’s new restroom and playground equipment. JP Johnson and Leola Jordan Park will receive new asphalt as part of a working relationship with the Pearl River County Board of Supervisors to provide safer parking.