May brings the transition to summer 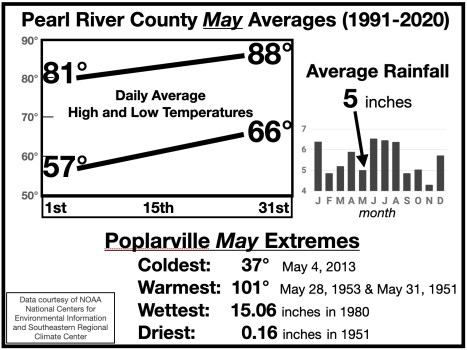 The month of May, a month known for marking our transition from spring to summer, begins on Sunday.

Although autumn is my favorite season, several days during this last week of April have made me appreciate spring. It’s hard to complain about cool mornings, mild to slightly warm afternoons, sunny skies, and low humidities.

However, yesterday and today (Saturday), a change is underway that is a small-scale version of what will be happening during the upcoming month. Humidity and warmth are increasing, and today the phrase “chance of widely scattered afternoon showers” makes its appearance in the forecast and remains for the upcoming week.

We can thank the subtropical Atlantic high pressure system, sometimes referred to as the Bermuda-Azores high, for the southeasterly winds that push warm, moist air onshore from over the Gulf of Mexico and toward the star marking Pearl River County on the map shown here.

The Bermuda high usually strengthens and expands during May and continues to do so through July. This map of sea level pressure is the 70-year average for May. It shows the clockwise circulation around the sprawling high, which is associated with our typical summertime pattern of onshore winds.

Humidity increases during May, while fronts still slide down from the north before often stalling near us. The combination can produce spectacular rainfall events, such as 10.56 inches on May 11-12, 2019, in Poplarville, and an incredible 23.90 inches in Slidell during May 8-10, 1995.

Generally, however, moisture in May doesn’t return at the soggy levels typical of June, July, and August. The result is that our average May rainfall is lower than seven of the other months of the year.

As for warmth, this graph of average daily temperatures is a reminder to enjoy springtime during the early portion of the month. By the end of May, we’ll likely realize that summer has arrived.

Keep on keeping on and don’t give up on dreams

Ian and Charley, a tale of two hurricanes