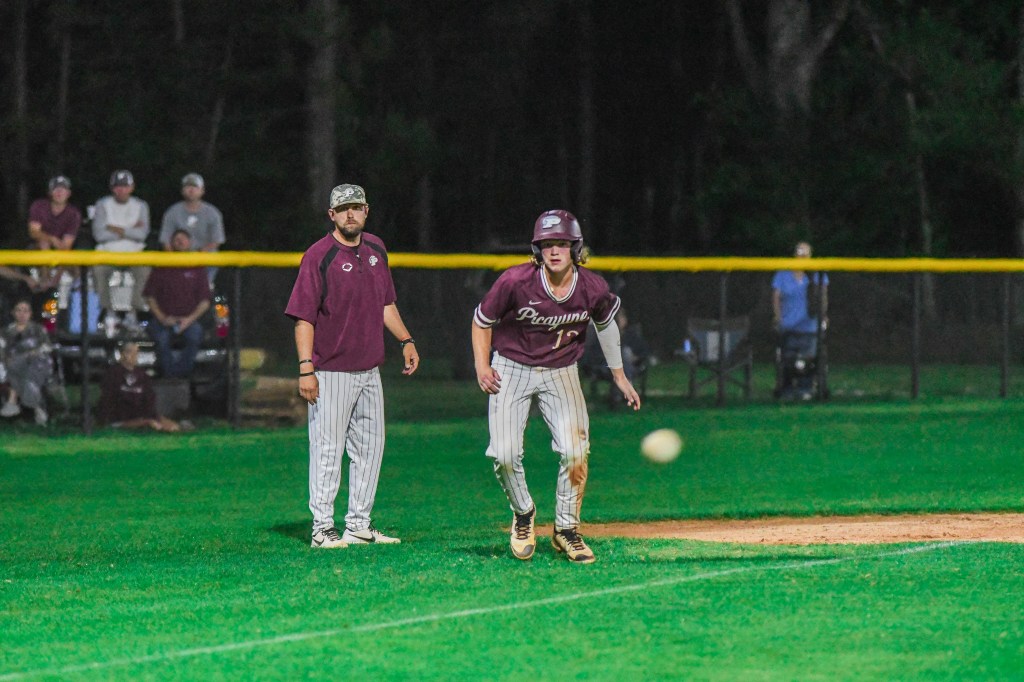 From left, Head Coach Evan Nicolson looks on while Morgan Craft prepares to run for home from third base during the Maroon Tide’s 5-3 win over the Bearcats Thursday night.

The Picayune Maroon Tide won the third of a three game series against district opponent the Long Beach Bearcats (13-8 overall, 5-3 district). Thursday night’s 5-3 finish started off rough defensively for both teams, but a late-game double RBI by Dawson Underwood gave that extra separation to clinch a win.

The first two innings were scoreless, but were highlighted a few outfield catches by Chris Davis, and Morgan Craft. Pitcher Brady Roberson struck out a batter and made a couple plays that put players out.

At the top of the third, the Bearcats took a 1-0 off a single RBI. The Maroon Tide closed out that inning when Craft stopped a rolling ground ball and tossed it to Robertson at first base.

The Maroon Tide got on the board during the fourth inning. With Sam Landrum at bat, Craft stole third base off a Bearcats’ error. That set him up as Landrum connected at bat and sent Craft home for the 1-1 tie.

In the following inning, Brady dominated at the mound, striking out the first and third Bearcats at bat.

At the bottom of the fifth and with two outs, the Bearcats made a pitching change. The Maroon Tide capitalized in spite of there being a fresh arm and got the bases loaded. Craft read the pitches gave the Maroon Tide a 2-1 lead. However, Robertson was struck out at bat the following round for a third out.

Davis was a on point in the sixth inning, catching back-to-back deep balls for the Bearcats final outs.

At the bottom of the sixth, the Maroon Tide took a bigger 5-1 lead courtesy of Jamie Lumkin’s single RBI, followed by a double RBI that reached the wall by Underwood.

The Bearcats didn’t go away quietly, with two outs the team managed to make two single RBI runs. Robertson stayed solid at the mound and closed the game out by stopping an infield hit and making the throw to first base. That clinched the Maroon Tide’s 5-3 win.

Next, the Maroon Tide will play the Pearl River Central Blue Devils (17-9 overall, 6-2 district) this Saturday, April 16 at 7 p.m.