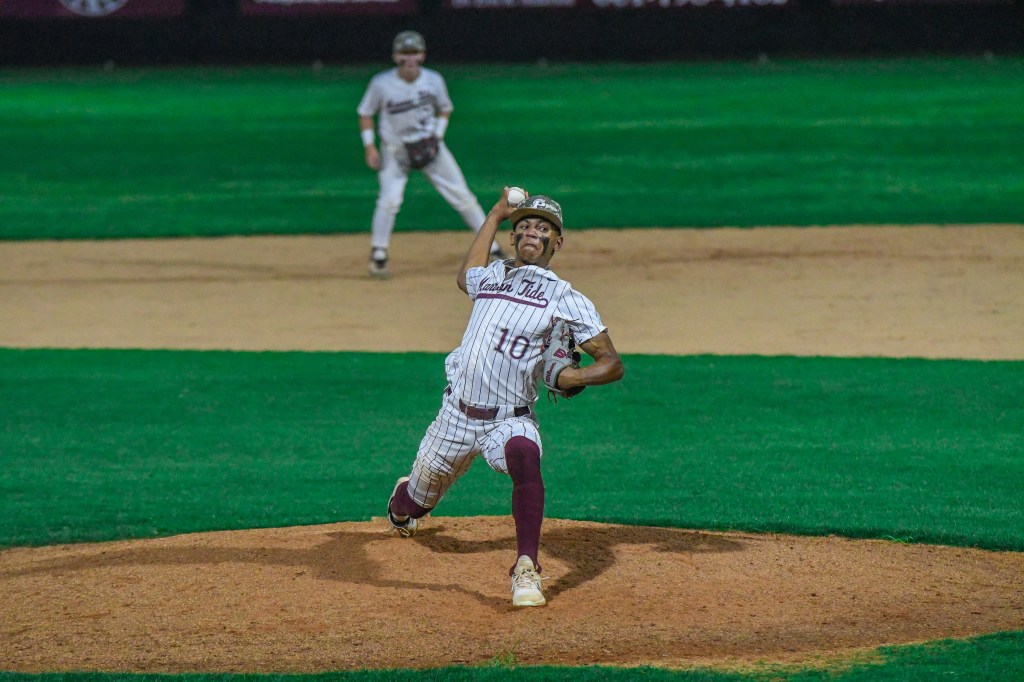 The Picayune Maroon Tide baseball team is still alive in the first round of the 5A state playoff championship series. They will have a chance to steal a win on the road this Monday, April 25.

After Friday night The Maroon Tide went down 9-3 in game one, of the best game of three series to the West Jones Mustangs.

The Maroon Tied trailed 5-1 after two innings, 7-3 after the fourth inning and 9-3 after the sixth inning.

On Saturday night the Maroon Tide kept their playoff hopes alive after a 4-0 deficit turned in to a 7-5 comeback win.

“We rode a little roller coaster early, Brady (Robertson) didn’t have his best night, but he battled… brought Kyler (King) in, he had a momentum strikeout in the fifth, scratched a couple out and got some momentum going. These kids started grinding their bats out, applying some pressure in the sixth and we put up a big inning,“ said baseball Head Coach Evan Nichelson.

The top of the second inning highlighted strong defense from the Maroon Tide. Dawson Underwood caught back-to-back fly balls and Morgan Craft was in the right place to make a catching play near first base.

At the top of the third inning, the Mustangs went up 3-0 after scoring two single RBIs.

The Maroon Tide didn’t score the team’s first run of the night until the bottom of the fifth inning where Picayune was trailing 4-0. That deficit changed to 4-2 after a bases loaded situation resulted in King hitting the ball for a double RBI.

The Maroon Tide shut the Mustangs out of runs in the sixth inning. King scooped a ground ball and threw to first for one out, and he struck out the Mustangs third batter for their third out.

The bottom of the sixth is when there Maroon Tide offense got busy, scoring a total of five runs. With one out, Tanner Busby hit a single RBI. Chris Davis followed to first for a bases loaded. Jamie Lumpkin followed up with a single RBI hit to tie the game at 4-4. That put the crowd in an uproar of cheers, and Dawson Underwood followed at bat for a double RBI and Picayune’s first lead of the night at 6-4. Then, King connected for a deep hit that looked to be going over the wall but was caught by a Mustangs outfielder. That hit did provide enough time for Lumpkin to steal home for a 7-4 lead to end the inning.

At the top of the seventh the Maroon Tide clinched the comeback behind King who struck out two Mustangs batters and Davis who caught the game ending fly ball.

Game three will be played at West Jones High School in Laurel MS at 5 p.m.