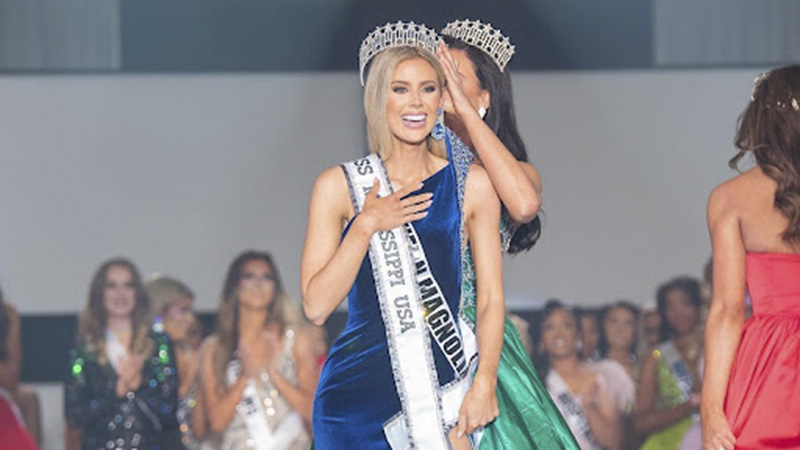 White started competing in pageants six year ago. She competed for the first time in the Miss Mississippi team division and in her first try her was named runner-up. Getting that far on her first attempt inspired her to keep going back. Years went by and White stepped away from competing to graduate college. She graduated in December of 2020 and started her career as a full time wedding planner at the Henry Smith House here in Picayune. She also works with her dad at Millcreek Ranch, where they train horses.

“He kind of taught me his trade growing up, so I have been helping him train horses as well as the wedding planning job, kind of bouncing back and forth,” White said.

White has always been compelled to compete in pageants,

“Something was telling me to compete again,” she said.

The pageant has brought White a lot of growth in building her confidence and people skills.

“It all kind of helped me in my career, personal and professional life.”

This year she went back to competing, giving it her all working with the pageant sponsors, improving her interviewing skills, getting fit for swim suit competition, and practicing her stage walk. She took a lot of trips to Nashville TN to meet with people to perfect her craft.

The weekend of the pageant, White felt surprisingly calm, she said no matter what the outcome would be, she knew she had given it her all.

“If it was meant to happen I was going to let it happen, if it wasn’t then I wasn’t called to do that,” she said.

When the judges ended up calling her name as a winner White said she was literally in shock.

“There’s a video, I was standing there with my mouth wide open for about 10 seconds, like ‘wait did that just happen?’ but it was the craziest feeling.” she said.

Her family was there being supportive and over the past few days her phone has been blowing up with notifications, an unreal moment for White.

A pageant is a mind over matter game where contestants must prepare mentally and physically.

“It’s comfortable for no one to get up on a stage and stand in front of everyone or a panel of judges… It’s kind of a soul searching moment, you kind of have to dig deep to know who you are, what you like, how you feel and be able to confidently display that to them,” said White.

It’s hard for White to wrap her head around the fact she will be competing for Miss USA. She’ll get a very rare opportunity to represent her home state in a once in a lifetime pageant.

“It’s life changing to win Miss Mississippi but just thinking about representing the country as Miss USA, not even just your state, is a crazy, unreal feeling. It isn’t going to feel real, I guess until I pull up to the competition,” said White.

White said she is looking forward to the opportunity to represent Picayune and Mississippi at the Miss USA pageant.

“I love Mississippi more than anything, there’s a reason it’s called the hospitality state, everyone you meet here is so kind, friendly… I absolutely love where I came from,” she said.