Lady Blue Devils are one win from a undefeated season 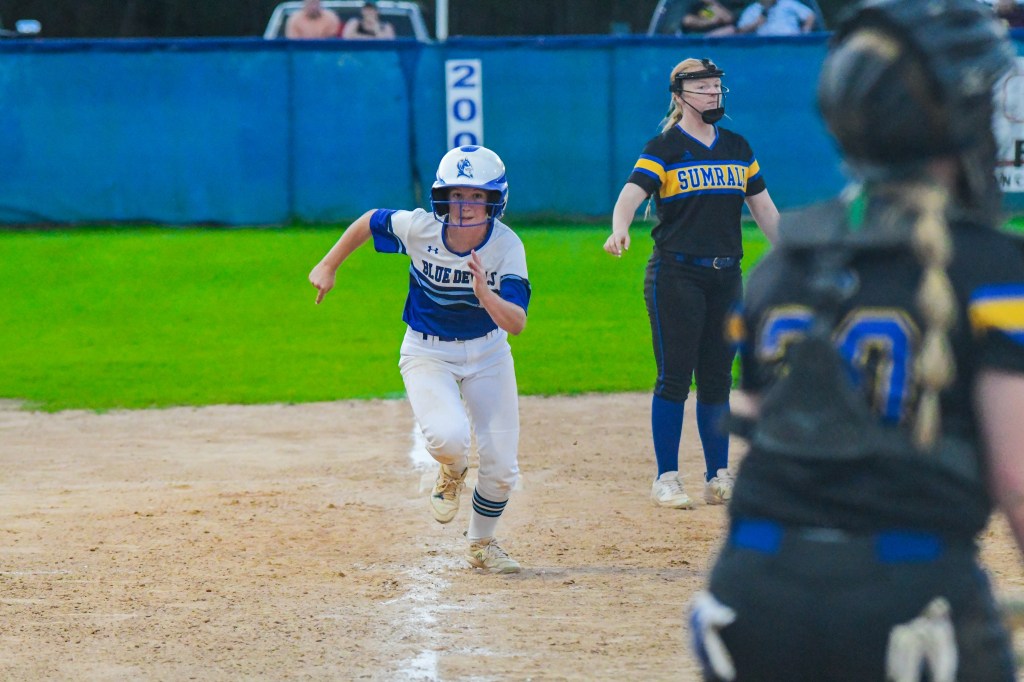 The Pearl River Central Lady Blue Devils played the West Harrison Hurricanes again on Tuesday and rallied to an 8-2 win.
The win moves the Lady Blue Devils to 16-8 overall and 5-0 in district.
The Lady Blue Devils took a big 6-0 lead after one inning, a much better start than during Monday’s outing.
“We kind of set the tone in the first (inning), it was less nerve racking than the night before because the night before it was like everything was hanging on every pitch. Not that we want to be relaxed, but up six nothing we didn’t have that kind of lead on Monday so I think it made everybody a little bit more comfortable defensively,” said Pearl River Central Head Softball Coach Tony Labella.
The following innings had no runs or scores until the bottom of the fifth and sixth innings, where the Hurricanes scored two runs.
In the seventh inning the Lady Blue Devils closed out the game, adding two more runs for an 8-2 win.
Pitcher Jazmin Robertson had a night to remember, throwing a two-hitter game, allowing only two earned runs and striking out six Hurricanes batters.
“Jazmin Robertson was outstanding, she took a shut-out up to the seventh inning,” said Labella.
During the night, the Lady Blue Devils had five total RBIs, and seven different players scored the team’s eight runs.
Carsyn Cacioppo led the team with two runs, while two stolen bases were accomplished by Ashlyn Dean and Zoe Wilson.
The Lady Blue Devils will play the season’s last district game at Long Beach to face the Bearcats (1-4 in district).
The Bearcats need the win to enter into the playoffs and the Lady Blue Devils need the win to complete the team’s goal of an undefeated district season.
“An undefeated season is always real hard to come by,” said Labella. “Our girls are really motivated to play them.”
With one more game to play, Labella reflected on the Lady Blue Devils as they have a chance to mark an undefeated district season this Thursday night.
“We started off kind of slowly, we had a couple key moments in the season where we won some close games and then turned some things around a little bit, we’ve had some really clutch hits early in the season and hopefully we’re playing some of our best ball now,” said Labella.
Labella said this year’s schedule was probably the hardest they’ve had since 2018 when the team won the South State title.
The Lady Blue Devils wanted to win district this year, so Labella scheduled the season accordingly. The team’s overwhelming success came as a surprise.
“To be honest with you, I’m a little bit surprised we’re 16-8 just because all the losses were from quality teams. With these last couple weeks, hopefully we’re peaking at the right time” he said.
The Lady Blue Devils vs. Bearcats game was set for Thursday at 6:30.