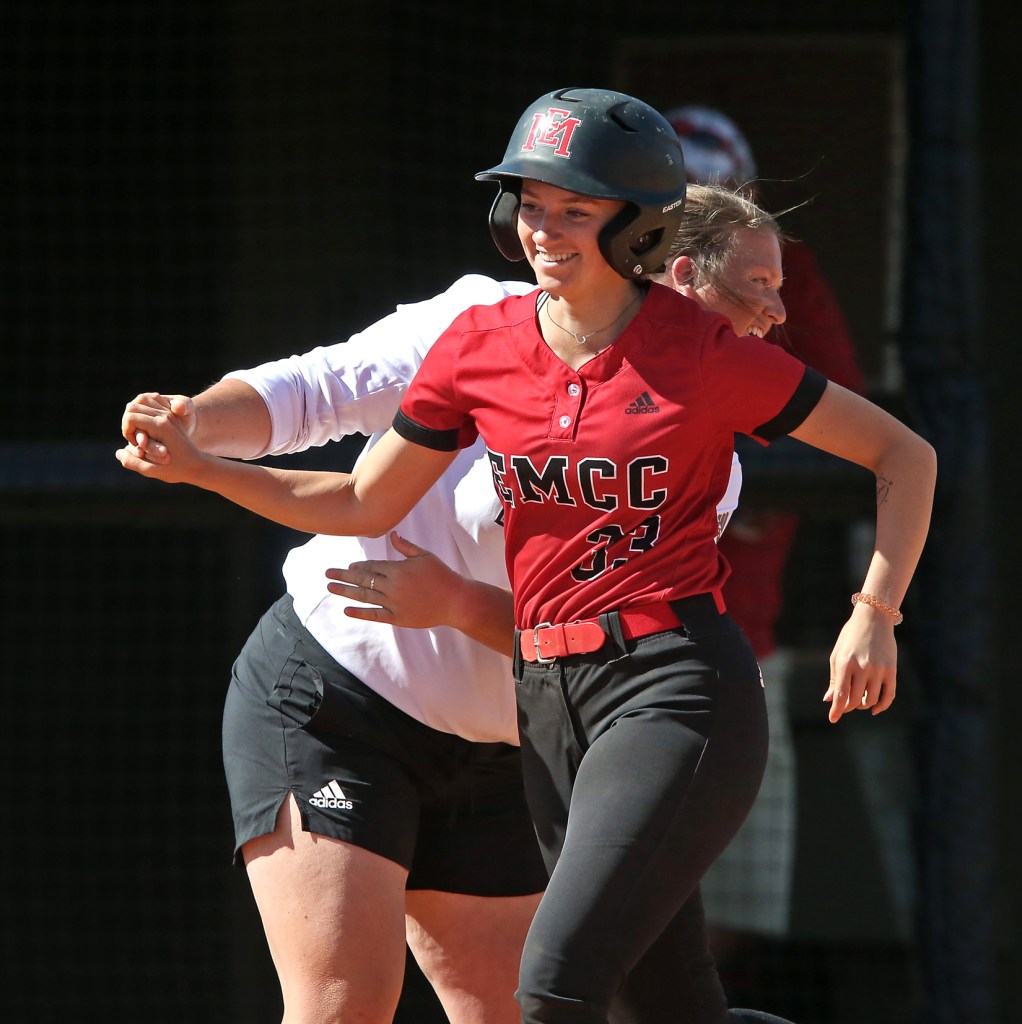 The back-and-forth nightcap began with the home-standing Lions taking an early 2-0 lead with solo runs in each of the first two innings on Celeste Study’s two-out, run-scoring double in the first and Maggie Meadows’ RBI single a frame later.

After Meridian knotted the score at 2-2 with a pair of runs in the third inning, EMCC reclaimed the lead at 3-2 in the home half. Both teams then posted single tallies a frame later before the visitors took their only lead (5-4) of the game on Sydney Sizemore’s two-out, two-run homer off Study in the fifth inning.

The Lions answered in the sixth to produce the game’s third deadlock. Following Kirkland’s leadoff single and consecutive one-out hits by Study and Carley Martin to load the bases, Kaitlynn Stroud’s run-scoring ground out tied the game at 5-5 heading into the dramatic seventh inning.

After Study set the Eagles down in order for the second straight inning, Meleah Pogue got things started in the home half of the seventh with a one-out double. Meadows then walked to set the stage for Kirkland’s game-winning, three-run blast off MCC reliever Kelly Brady.

Kirkland’s second home run of the season capped a 3-for-4 outing at the plate with four runs batted in and three runs scored for the freshman third baseman from Greensburg, La.

Martin, a freshman second baseman from Columbus’ Heritage Academy, finished off a 6-for-8 afternoon with three more singles in the second game. Study, Pogue and Aislynn Cochran added two hits apiece to contribute to the Lions’ 13-hit winning team effort.

In the circle for EMCC, Study picked up her second complete-game win of the week by limiting Meridian to just four hits over seven innings. The St. Martin High School product previously picked up her first collegiate win earlier in the week with a 6-1 road victory over Coahoma.

In the opening game, Meridian jumped out to an early 7-0 lead with three runs in the first, including a two-run homer by Maiya Joe, and four more scores a frame later off EMCC starting pitcher Laken Firth.

After getting on the board with a solo run in the second inning, the Lions cut MCC’s lead to 7-5 in their next at-bat with two-out, run-producing hits by Study, Stroud and Abby Stephens.

EMCC’s comeback attempt continued the following frame after the Eagles temporarily padded their lead to 9-5 with two more runs in the top of the fourth on Sizemore’s first home run of the day. In the home half of the inning, the Lions countered to take their first lead of the game. Run-scoring hits by Study, Martin and Stephens helped generate five runs to give EMCC a short-lived 10-9 advantage.

Meridian promptly answered by reclaiming the lead with three runs in the fifth and four more scores the following frame off Meadows, including Joe’s second homer of the game, to account for the final margin.

Despite being held hitless over their final three at-bats by Brady, in relief of starting MCC pitcher Avery Byerley, the Lions cranked out a dozen hits over the first four innings of the opener. Martin led the way with her first of two 3-for-4 hitting efforts on the day. Study, Stroud and Stephens added a pair of hits each for EMCC in game one.

Coach Whitney Hawkins’ EMCC Lions (7-32, 3-17 MACCC) are scheduled to continue their week-long home stand by playing host to Holmes on Wednesday (April 20) in a 1 p.m. softball doubleheader on the Scooba campus.