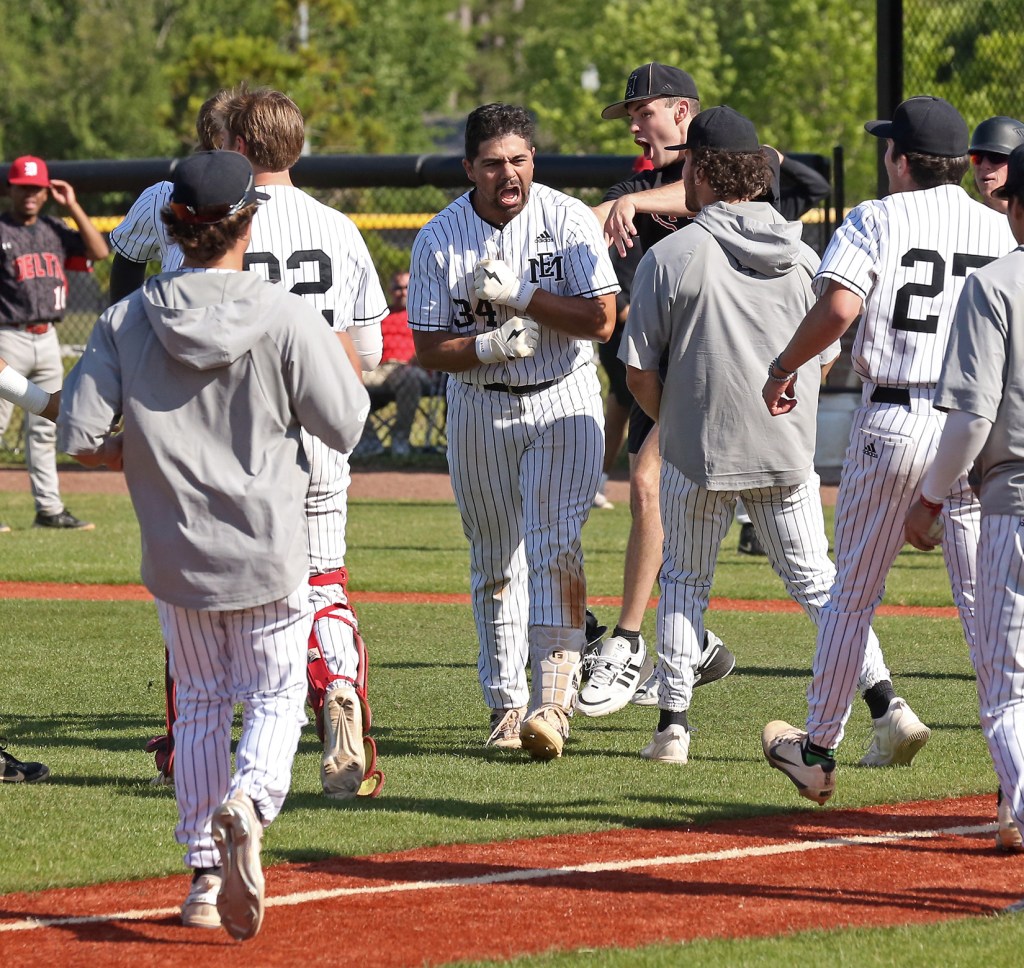 SCOOBA — With their seventh conference doubleheader sweep of the baseball season, the Lions of East Mississippi Community College claimed 6-5 and 6-3 home wins over Mississippi Delta during Tuesday’s MACCC action to move into sole possession of second place in the league standings.

The regular-season conference champion receives a bye into next week’s (May 5-7) MACCC best-of-three baseball playoff series and earns the right to host the NJCAA Gulf District/Region 23 Baseball Tournament (May 16-20). The next eight teams in the final regular-season MACCC baseball standings will advance to best-of-three playoff series with the higher seeded teams hosting (#9 at #2; #8 at #3; #7 at #4; #6 at #5).

In Tuesday’s twin bill against Mississippi Delta, the Lions needed a two-run ninth inning to pull out a narrow 6-5 victory in the opener and then rode Cade Davis’ complete-game pitching effort to a 6-3 nightcap win over the Trojans.

The visitors grabbed an early 2-0 lead in the opening game with solo runs in each of the first two innings off EMCC starting pitcher Gabe Garner.

The Lions answered by taking their first lead of the day with three runs in the second inning off Delta starting pitcher Brennan Duhe. After run-scoring singles by Hunter French and Ethan Medlin gave EMCC a 3-2 lead, the home team tacked on another run in the fifth frame on Blayze Berry’s two-out RBI single that plated Coby Holmes, who singled and stole second.

The Lions responded in the bottom half of the ninth by loading the bases off Delta reliever Kris Higgenbottom. A leadoff walk to Zack Griffith was followed by a Beau Bates single and a pinch-hit bunt single by David Dickerson. After French coaxed a game-tying walk to bring home pinch-runner Johnny Setchfield from third, Bates tagged up on Wesley Sides’ towering fly ball to shallow left field to score the game-winning run in walk-off fashion.

Offensively, Berry led EMCC in game one with two singles and a hit-by-pitch in four plate appearances.

The Lions led throughout the seven-inning nightcap, scoring in all but one of their six at-bats. Following a two-run opening frame keyed by Trey Trosclair’s RBI triple, EMCC added solo tallies during each of the next three innings to move ahead, 5-2, after four innings. Run-producing singles by Holmes in the second and Dickerson a frame later preceded Holmes’ leadoff homer in the fourth – his sixth of the year.

Off Davis, Delta scored twice in the third and once more in the seventh to account for the final margin. A sophomore right-hander from Ripley, Davis scattered eight hits and struck out six to improve to 4-2 on the season.

With eight more hits as a team in the second game, the Lions were led offensively by Holmes’ 2-for-3 outing at the plate with three runs scored and two runs batted in.

Friday’s regular-season doubleheader finale between EMCC and Hinds is slated for a 2 p.m. first pitch at Gerald Poole Field on the Scooba campus.