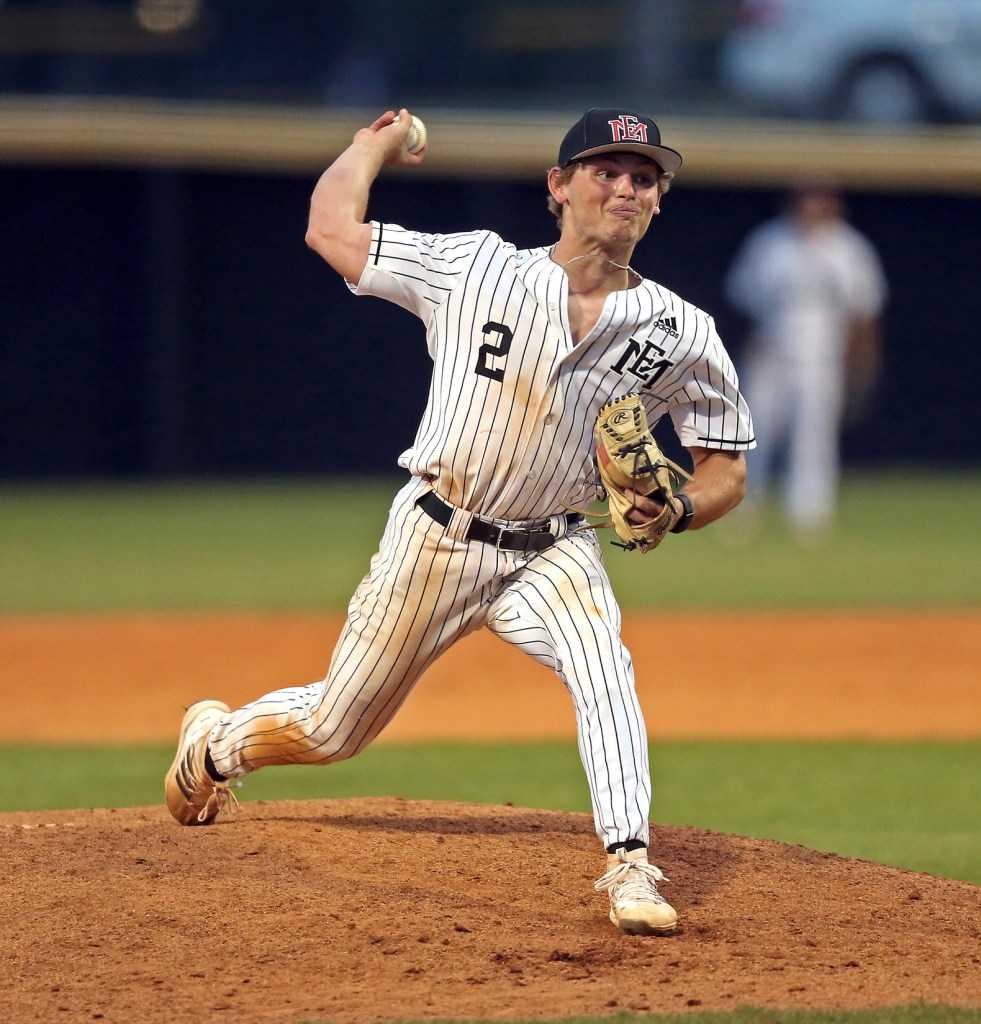 ELLISVILLE — The Lions of East Mississippi Community College maintained their second-place tie within the MACCC’s baseball standings by sweeping Jones College, 11-2 and 11-1, on the road during Saturday’s conference action played at Community Bank Park.

In sweeping their sixth conference baseball doubleheader of the year, EMCC outscored Jones, 22-3, and outhit the Bobcats, 20-9, on the day. In addition, Jones used a total of nine pitchers during the twin bill, while the Lions received complete-game pitching efforts by Kylan Stepter in the opener and Blayze Berry in the nightcap. The nine total hits allowed by EMCC’s pitching tandem were all singles.

In the scheduled nine-inning opening contest, the teams were tied at 2-2 through the first three innings. Both of Jones’ runs came in the second inning when Jakob Wax and Andrew Jones came around to score after getting hit by pitches. EMCC countered with Hunter French’s two-out RBI double in the second inning and Berry’s run-scoring single a frame later.

As Stepter settled in after some early control issues, the Lions continued to provide run support for the sophomore right-hander by scoring multiple runs during three of the last four innings of the run-rule victory. Without the aid of an extra-base hit during that four-inning span, EMCC scored four runs in the fourth, three in the sixth and two more in the seventh on six singles, six walks, four hit batsmen and three run-producing wild pitches.

On the mound for the Lions, Stepter improved to 4-2 on the year by going the distance. The Hernando product scattered four singles with two strikeouts and three walks during his seven-inning stint.

The seven-inning nightcap was similarly tied through the opening innings before the Lions took charge during the closing frames. Jones’ unearned run off Berry in the first inning was countered by EMCC plating an unearned run of its own two frames later off Bobcat starting pitcher Andrew Nix.

The turning point in the second contest came when the Lions scored six runs in the fifth inning to take a 7-1 lead. French coaxed a two-out walk to set the stage for successive singles by Ethan Medlin, Wesley Sides and Holmes at the top of the lineup. EMCC’s game-changing, six-run rally was capped by Berry’s two-run double followed by Trey Trosclair’s sixth home run of the year.

The Lions ultimately closed out their doubleheader road sweep over the Bobcats by batting around in the seventh inning. Despite only one single in the frame, EMCC took advantage of five walks issued by three different Jones pitchers to push across four more runs to account for the final margin.

With nine hits as a team in the nightcap, the Lions received two-hit efforts from Berry, Medlin and Kade Shannon.

Meanwhile on the mound for EMCC, Berry allowed just five singles in his complete-game victory to improve to 4-1 on the season. The UAB signee out of Columbus’ Heritage Academy struck out three and issued just one walk.

Entering the final week of regular-season play tied with Hinds for second place in the MACCC’s baseball standings – two games behind nationally second-ranked Pearl River – head coach Brett Kimbrel’s EMCC Lions (22-15, 17-7 MACCC) are scheduled to close out their regular-season slate by playing host to Mississippi Delta on Tuesday (April 26) and Hinds on Friday (April 29). Both upcoming East Mississippi baseball doubleheaders are slated for 2 p.m. starts at Gerald Poole Field on the Scooba campus.