Board of Aldermen set date to hold public hearing on cannabis 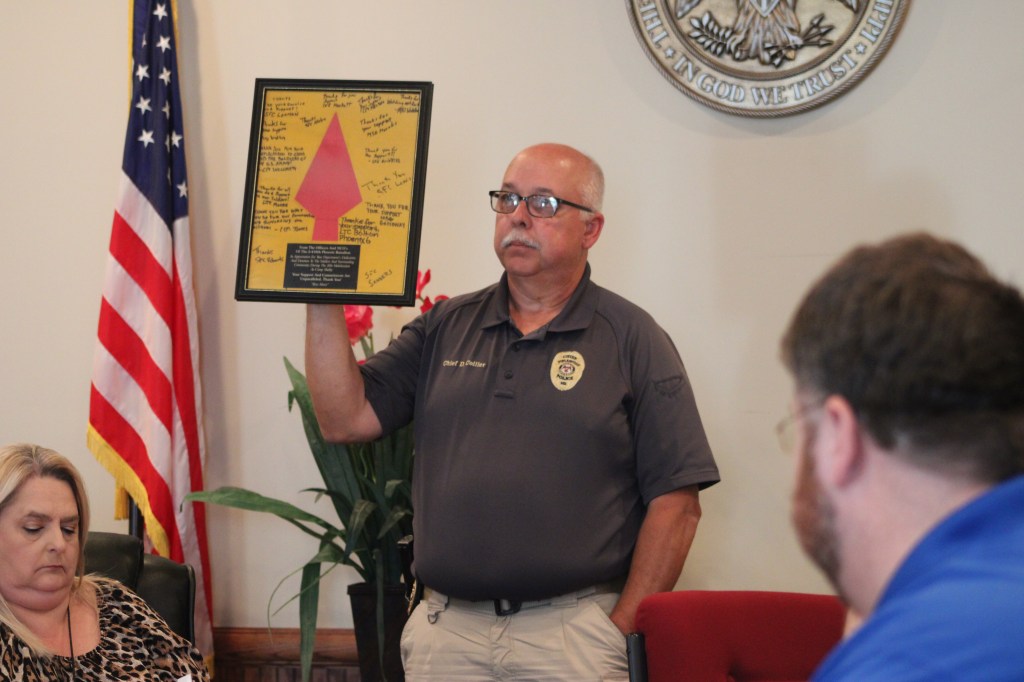 Police Chief Daniel Collier shows the Poplarville Board of Aldermen a flag signed by Camp Shelby personnel that was gifted to the Poplarville Police Department recently.

The Poplarville Board of Aldermen met Tuesday evening to further discuss medical marijuana.
Senator Angela Hill and Representative Jason Owen were invited to the meeting to provide the Board with an update on the latest Legislative session. Hill started by saying if she intends to run for senate again, and if reelected, she will represent the city of Poplarville, the entire county and three boxes in Stone County.
Hill fought for the city of Poplarville to be included in receiving BP funds, which were used purchase an industrial building off Highway 26. The city was also able to get funding for a ladder truck for the Poplarville Fire Department.
Hill said the fact that Poplarville is a college town was one of the reasons the city was able to get that funding.
“The Legislature is always concerned about a college town and we need to use that with every opportunity that we have, we need to use that fact that Poplarville is a college town,” said Hill.
Hill said there radio dead spots in Poplarville.
She worked with the Emergency Communications through the technology committee and Mississippi Wireless Information Network (MSWIN) to get extra funds to build towers in places in the state that need them. The request was for 10 towers that would cost $21 million, but received an estimated $11-12 million to build five towers. Hill said Pearl River County was first on the list to get a tower, but the matter is not set in stone yet.
“I’m going to do my best to try and make sure that from that $11 million extra they got, we will get our tower out of it,” Hill said.
There is no set date for when the towers will be built.
Owen spoke to the Board about water and sewer projects. Through the Department of Environmental Quality grant program, the Board can apply for water meters and drainage projects.
“I had a legal staff look at your proposal and everything looks to be, on its face, eligible for the grant program and through ARPA,” Owen said.
Owen advised to Board to look at the preliminary regulations and get a priority list together and review it with city engineer Jason Lamb.
The Board also discussed the topic of medical marijuana, but took no action.
During that conversation Hill shared her opinion of what the Board should do.
“Make sure the citizens and the people understand what the program really amounts to. It amounts to allowing growing, processing, and dispensing pretty much any form of marijuana,” said Hill.
The Board can’t limit the number licenses issued to those who would grow, sell or dispense, the substance and the new law states marijuana can only be smoked at home or on private property. It’s prohibited for card holders to smoke in vehicles and if they are pulled over while smoking, law enforcement will have as probable cause to search that vehicle even if that person has a card. Hill also said that the law states the substance can only be provided to card holders through a dispensary, not a pharmacy.
Poplarville has the option to opt out now and opt back in later once the law takes effect. But any city or county that opts in can’t opt out. During Tuesday’s meeting, the Board discussed the option of of opting out now then opting back in at a later date.
The board will hold a public hearing Tuesday April 26 to discuss medical marijuana to hear comments from the public before making a decision. The option to opt out ends May 2, 2022.
In other business the Board approved the claims docket in the amount of $136,028.
Police Chief Daniel Collier presented the Board with information pertaining to the Poplarville Police Department assisting military personnel traveling from Camp Shelby.
Camp Shelby was conducting convoy training recently and stopped at the police department, where local officers assisted personnel from Camp Shelby with anything they needed.
A flag Camp Shelby personnel fly on their trucks was gifted to the police department and signed by members of Camp Shelby a thank the department.