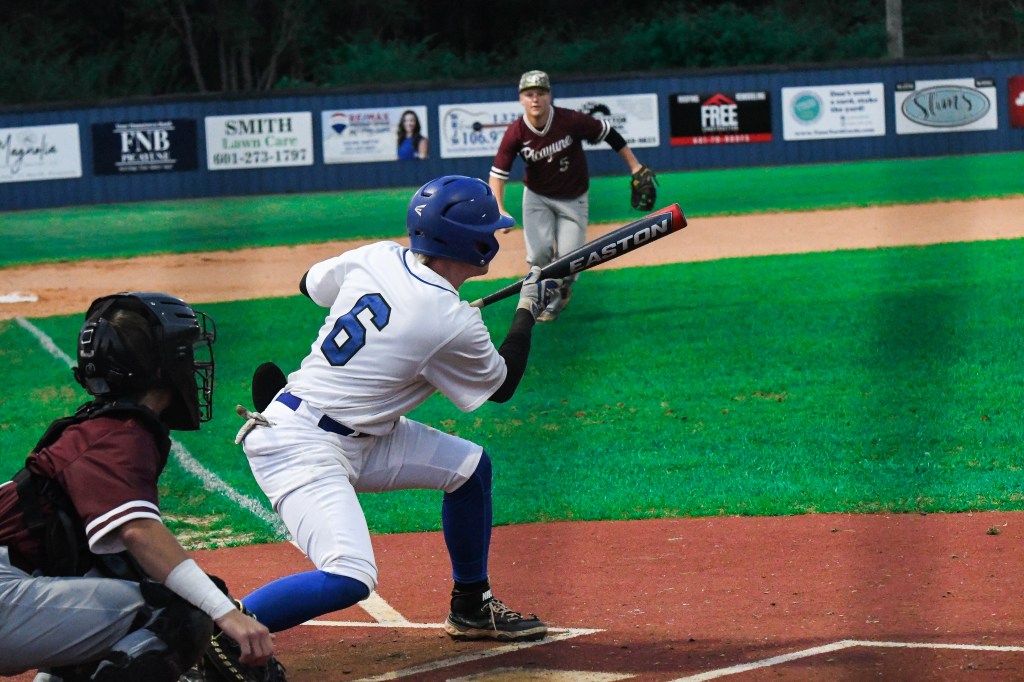 Noland Walther gets ready to bunt during the Blue Devils' 10-0 win over the Maroon Tide Monday night.

At the top of the first inning the Maroon Tide was sent its dugout quickly after two strikeouts and a tag on Chris Davis while trying to steal second base.

At the bottom of the second, Dawson Underwood was substituted in as pitcher. The Blue Devils stayed aggressive and got four runs despite the fresh arm. Blue Devils led 7-0 courtesy of Caleb Dyess’, and Hunter Brunson’s double RBI plays.

The top of the third was the same story for the Maroon Tide offense, a quick three and out. Stockstill made a great leaping catch near first base to close out the inning.

At the bottom of the third inning, the Blue Devils where held to zero runs. Maroon Tide’s Chris Davis caught back-to-back fly balls and Trent Watts near third base made a ground play to first for a third out.

At the top of the fourth the Blue Devils performed some great highlight plays. Dyess made a diving catch near the home run wall. Then the team ended the inning with a perfectly sequenced double play made at second then to first base.

At the bottom of the inning, Underwood made a few plays to carry the team through the inning. He first stopped a ground ball and made the play to first. Then he struck out the next two batters.

At the bottom of the fifth, the Blue Devils placed runners on third and second base. With runners in scoring positions, Dyess connected at bat and brought both runners in for a double RBI and 9-0 lead.

The Maroon Tide came out empty after the top sixth inning.

That allowed the Blue Devils to take offense and with two outs and Chris Hart on second base, Jared Dickens connected and brought Hart in for a single RBI and a 10-0 finish.

Next are the 5A state playoffs. On April 29, Blue Devils will host the series winner between Wayne County War Eagles and the George County Rebels.