Blue Devils down the Maroon Tide in seven innings 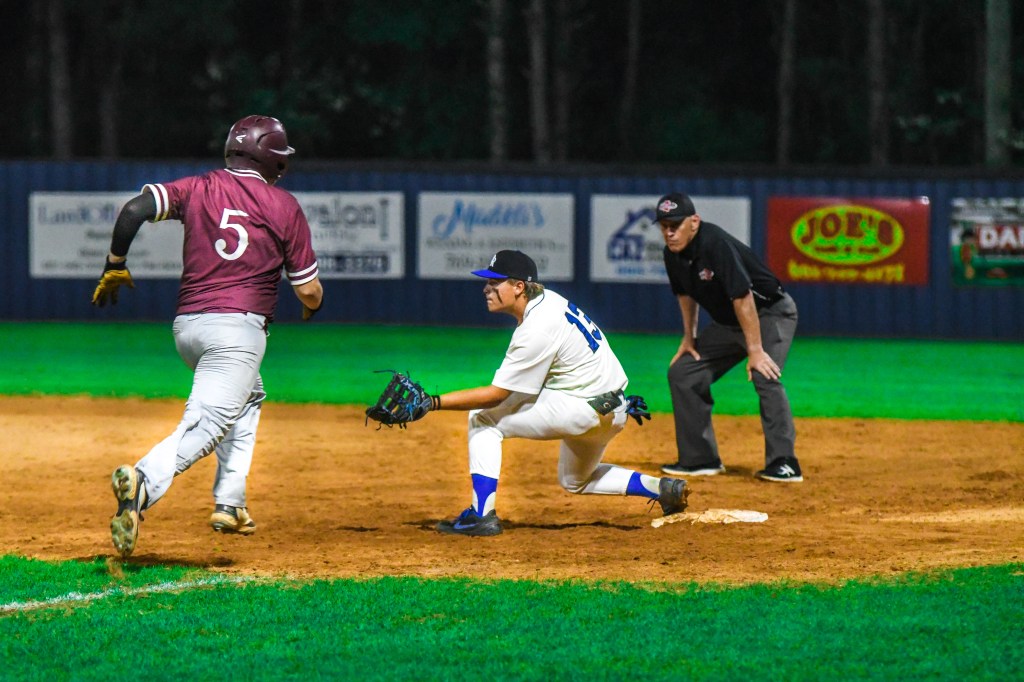 Wednesday night featured a district matchup between the Pearl River Central Blue Devils and the Picayune Maroon Tide. The game started as a great showing of defenses but quickly turned into a one sided slugfest from the Blue Devils who turned a zero scoring game by the fourth inning into an 8-0 victory.
There were a lot of outstanding defensive plays made between the first and the fourth innings. Blue Devils pitcher Caleb Dyess caught an amazing straight line drive for the first of three outs.
At the bottom of the inning, the Maroon Tide made perfect back-to-back-to-back plays to first base.
In the second inning, both teams showed their batting strength by making deep hits and getting runners on base. But that was short lived as no runs came out of it.
The third inning was much of the same; a lot of caught fly balls and plays made only to first base.
At the top of the fourth inning the Maroon Tide came up empty. The team got as far as second base but received their second of three outs when Brady Robertson got tagged trying to steal third base.
The bottom of the fourth is when the Blue Devils got hot. With no outs and bases loaded, BJ Bellelo got a single RBI and his team got off to a 1-0 lead. Jacob Johnson followed at bat and he got another single RBI for a 2-0 lead. During that play, the Maroon Tide tagged Bellelo while running to second base for Picayune’s first out. With runners on first and third, Heath Brunson hit a very short but perfect bunt that allowed another Blue Devils runner to score and take a 3-0 lead. Following that play Jared Dickens played a bunt to get bases loaded again. Noland Walther made a big hit towards the wall for a triple RBI play and resulted in the team getting a 6-0 lead. The Maroon Tide managed to tag Dickens out while running to third for the team’s second out. At the end of the forth, the Blue Devils led the Maroon Tide 6-0.
At the top of the fifth, the Maroon Tide managed to get Chris Davis on second base, but nothing further.
At the bottom of the fifth, the Maroon Tide defense made a few defensive plays to shut out the Blue Devils. Pitcher Tanner Busby struck out a hitter, and Trenton Watts made a quick play to first base for the team’s third out.
At the bottom of the sixth, with Blue Devils runners on first and third, Walther struck a single RBI for a 7-0 lead, but Walther was tagged out at first for a second out.
With a runner on third, a pitching error allowed a Blue Devils runner to steal home for an 8-0 lead.
At the top of the seventh, the Maroon Tide unfortunately couldn’t produce any runs, even when having runners in scoring position on two different occasions.
This win moves the Blue Devils to 15-8 overall and 4-1 in district play. The team currently sits at first place in district.
This loss moves the Maroon Tide to 9-14 overall and 2-3 in district play. Picayune currently sits at third place in district, behind the Long Beach Bearcats and the Blue Devils.
These two teams will play again Friday, April 8, this time the Maroon Tide will host.