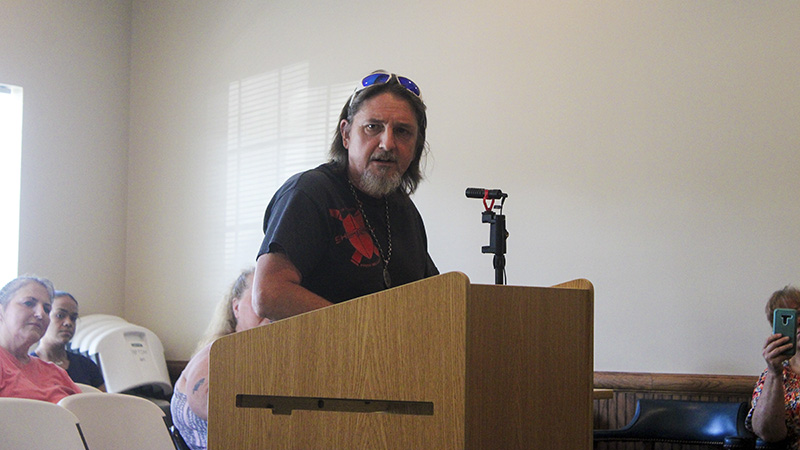 Larry Gonzalez speaks to the Board of Aldermen about what he’s learned about medicinal cannabis and advocated for the Board to not opt out of the manufacture and distribution of medical marijuana. Photo by David Thornton Jr.

On Tuesday afternoon the Poplarville City Board of Aldermen held a special call meeting to hold a public hearing to gather input regarding the medical marijuana act. This meeting was for the Board to hear public opinion concerning the growing, processing and distribution of medical cannabis and cannabis products in the city of Poplarville.

Tuesday’s meeting might of had the most public attendance in over a year. By looking at the number of Poplarville residents who attended the public hearing, the topic of whether to allow the manufacture and distribution of medical marijuana in the city was important to them. Fourteen Poplarville residents got to speak their mind about why the Board should not opt out. Reasons ranged from creating more jobs, eliminating the need to travel to other cities and how access to medical marijuana can eliminate certain people’s current overload of medications.

Before the people spoke, city attorney Gregory Holcomb gave an overview of the act. He informed the public that the option to opt in calls for no action what-so-ever and that access to medical marijuana was passed during a vote held in 2020. However, the vote was dismissed by a technicality in state law, but a recent Legislative session led to the passing of a Senate bill called the Mississippi Medical Cannabis Act. Within the bill, the Legislature put forth the option for counties to opt out of the act within 90 days of it passing. That day is May 2, 2022. The regulations from the Mississippi State Department of Health and Department of Revenue are still not final.

“All information as far the regulation of the act and procedures is not yet final…this is still a developing process,” said Holcomb.

Larry Gonzalez has been a Poplarville resident since 2000. He said he used to be against marijuana back in 2001 until his wife encouraged him to do research. He realized his wife was right, about the medicinal aspects of cannabis.

“I’m not up here promoting Woodstock, I’m advocating the medicinal use of marijuana for people who need it,” said Gonzalez.

He added that the city should allow the manufacture of the substance to give famers another job opportunity.

“Let our county have it, we need it, we need the revenue, just to put some farmers to work, and heal some people,” he said.

Retired local elected official Anthony Hales Sr., related to the Board’s members about the difficulty of making unpopular decisions as elected officials. Hales said he isn’t a marijuana user even though he suffers with pain y, but he respects the voice of others.

“The vote, that’s huge, we voted for it, you can’t take that away. Why would you do that to people who fight so hard for something? We’re not doing this for ‘hippy pot heads everywhere’ that’s not us, at all. We just want what we voted for, we want health, we don’t want to see these people out here on all these different opioids and that kind of stuff when there’s an alterative to all of that,” Poplarville resident Tamra Steiner said.

Resident Brittney Creel said she is a cancer survivor. She spoke about the emotional struggles and suffering due to the fact she’s not being able to legally get medical cannabis. She told the Board about her experiences in states with legal marijuana.

“I’ve seen what they look like, I think a lot people have a misconception of what those places are, they are more secure than our pharmacies here in town which carry the drug people are stealing for. I think our city has an opportunity to take a step of faith, trust your selves first and trust this community,” said Creel.

She said medical marijuana needs to be accessible and while it’s true residents can travel to other counties she feels it needs to be more easily accessible to locals who need it.

“It’s not that far until you have cancer. It needs to be right here and it needs to be done now,” Creel said.

Almost every person who spoke said that they feel it would be wrong for the Board to go against the popular vote. And many said the dispensaries they’ve been to in other states are secure and regulated.

“They have all kinds of protocols in line just to make sure everybody is getting what they need, not what they want, if you’re going in to get high, it ain’t happening. You got to have your prescription, you have to get only what they’re allowing you and that’s it,” said Poplarville resident Strom Daigle.

Louise Cowart is a life long Pearl River county resident who showed a long list of the medicaiton she has to carry with her.

“Medical marijuana could really alleviate a lot of what’s on this list and so I am definitely all for that because if I don’t have to take a lot of pills I would much rather do that,” said Cowart.

Poplarville resident Asa Goins-Hayes, who is also a nurse, takes care of her father who suffered a stroke. She said he takes 37 pills a day. He’s had to start more medication due the side effects of the current medication.

She said he would benefit from access to medicinal marijuana.

After the pubic spoke, each Board member reflected on what they’ve heard and cleared the air about rumors that the Board was leaning toward opting out.

In his or her own words, every Board member expressed their intent to allow the production and distribution of medical marijuana. In the end, the board made no motion to opt out of cannabis act.