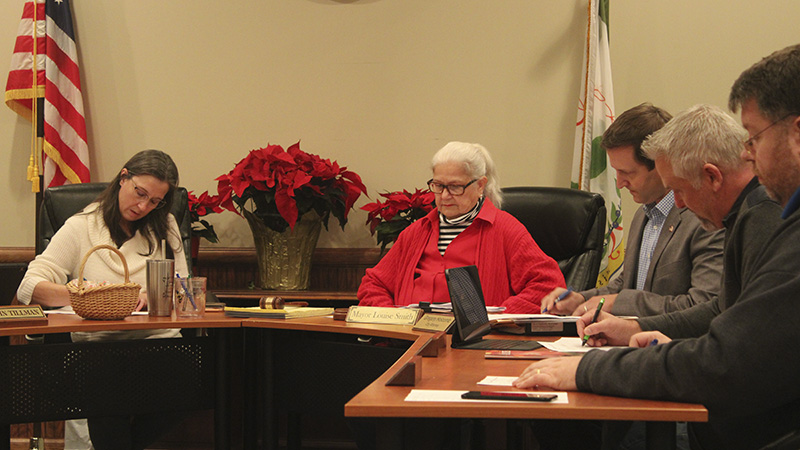 Mayor Louise Smith and members of the Board of Aldermen look over bids for the grass maintenance at the city cemetery and Forest Lawn Cemetery during Tuesday’s meeting. Photo by David Thornton Jr.

During Tuesday’s Poplarville Board of Alderman meeting, the Board discussed purchasing three new police cars, applying for a COVID related grant and seeking a new method to alert the public to severe weather other than the tornado sirens.

Alderwoman Anne Gendusa Smith suggested the Board approve a motion for the Police Department to purchase three new patrol vehicles. She also addressed other public safety needs like new breathing apparatuses and turnout gear for firefighters.

“The police cars, they are falling apart and when I say this I can not express this enough, they are on their last leg,” she said.

Smith suggested the Board buy two police cars with the ARPA funds, then request a grant to Lower Pearl River Valley Foundation with the help from Senator Angela Hill and use that money to get the rest of the things the city needs.

After a short discussion regarding the current limited availability of vehicles and the increase in cost due to the supply and demand issues, Alderman Daniel Brown asked the Board if the city has the funds to buy three cars. Mayor Louise Smith said yes, so Brown made a motion for Police Chief Daniel Collier to solicit bids for three cars. His motion was approved. Previous purchases of police cars were about $38,592 per vehicle. Collier said he will see how many cars are available and their current cost.

The Board approved to apply for the Mississippi Justice Assistance grant called Corona Emergency Supplemental Funding. The grant is in the amount of $10,000, and is limited to a computer systems and two laptops for the Police Department.

The Fire Department is willing to start installing RAVE Mobile Safety to alert the public to impending severe weather. It’s a cheaper alternative to using the county’s and PRCC’s tornado sirens on, and Fire Chief Jason Bannister said most areas are getting rid of the old sirens. PRCC has already revemoved the sirens on that campus and instead installed RAVE, which is an alert system for the city.

“If there is any emergency in the city, they (citizens) can sign up and log-in, put all their information in it and whenever we send an alert out, it goes straight to their phone,” said Bannister.

Bannister will seek more information and prices but he believes the cellphone alert system will be cheaper than getting the tornado sirens working.

In other business the Board moved its city cleanup date to April 30. The Board then went into executive session to discuss personnel matters.