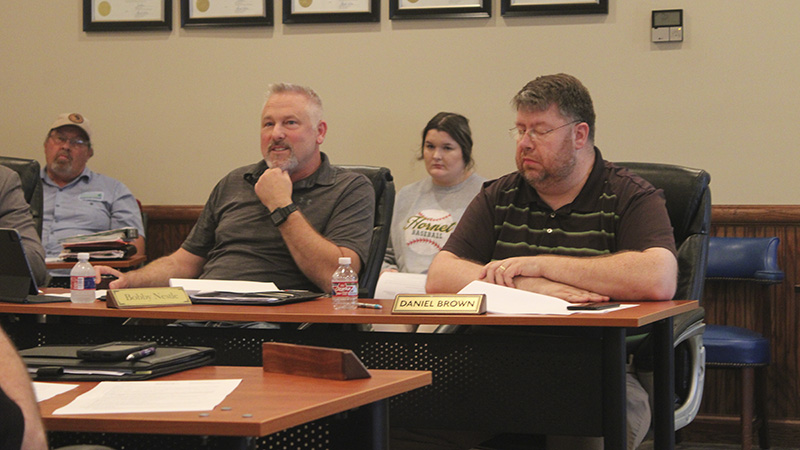 Poplarville’s Board of Alderman discussed the current golf cart ordinance and the medical marijuana law during Tuesday’s meeting. The Board also approved a motion to move forward with three drainage repair projects, yarn bombing art around the city, and to reopen the lobby of City Hall.

After the projects had been put off for some time, the Board approved a motion to move forward with three drainage projects at N. Main Street, McGehee Street and Rosa Street. These projects will exceed $50,000 and will be funded with Internet sales tax funds. The Board is seeking bids to for the project.

In other news, the Poplarville Fire Department will receive a new ladder fire truck worth $500,000 as part of a move by the Senate. Fire Chief Jason Bannister is waiting to hear back from Senator Angela Hill for further details and for the matter to receive a signature from the governor.

There was no action taken regarding a golf cart ordinance but after a long discussion the Board asked city attorney Gregory Holcomb to continue to refine the ordinance. During the discussion, the Board compared its ordinance to neighboring cities, and Aldermen Member Bobby Nestle has heard concerns of the potential of locals not being able to use golf carts during the night or on weekends. Discussion was also had concerning allowing residents to use golf carts at any time in residential areas but the low speed vehicles should not be allowed on Main Street, especially during business hours. The Board also discussed the potential of annual fees for golf cart use on public streets and the need to install signs from Mississippi Department of Transportation.

Poplarville Artist Nikki Main received approval from the Board to begin gathering volunteers in an effort to create yarn bombing art. Yarn bombing art involves using yarn to decorate trees and other items in the city.

“Sweaters for trees or for benches, they crochet or knit it, sometimes they’ll make flowers and attach them to yarn or zip ties, it doesn’t do any damage,” she said.

Main says the art will be in place for up to three months, but if the decorations start to deteriorate they will be replaced sooner.

May 2, is the deadline for the city to opt in or out of the state’s medical marijuana growers and or dispensaries. It’s still unclear what the Board will do but they are weighing all options. Aldermen Bobby and Kevin Tillman said the state law now allows possession of medical marijuana, so the city may as well allow the sale of it in Poplarville.

In other business, City Hall’s lobby is now open to the public, after being closed for some time due to the pandemic.

They also approved three event requests. One was from the Poplarville Area Chamber of Commerce to hold an April Easter Egg Hunt with entertainment and games at the Town Green from 7 a.m. – 2 p.m. on April 16, 2022. This year the Chamber will not be doing the 5K run.

The Board also approved a request to hold a benefit fund-raiser for Ann Bowman to be held at the Town Green on April 23, 2022. The event will feature lunch plates for sale, a raffle for various items, along with a jewelry and bake sale. Live music will also be featured. The event will take place from 10 a.m. – 4 p.m. that day.

And the third event is a worship service to be offered by Lighthouse of Hope Church at the Town Green on June 24, 2022. Community churches will be involved and they will have a band from Tennessee with a guest speaker. The event will take place from 6:30 p.m. – 10:00 p.m. that evening.