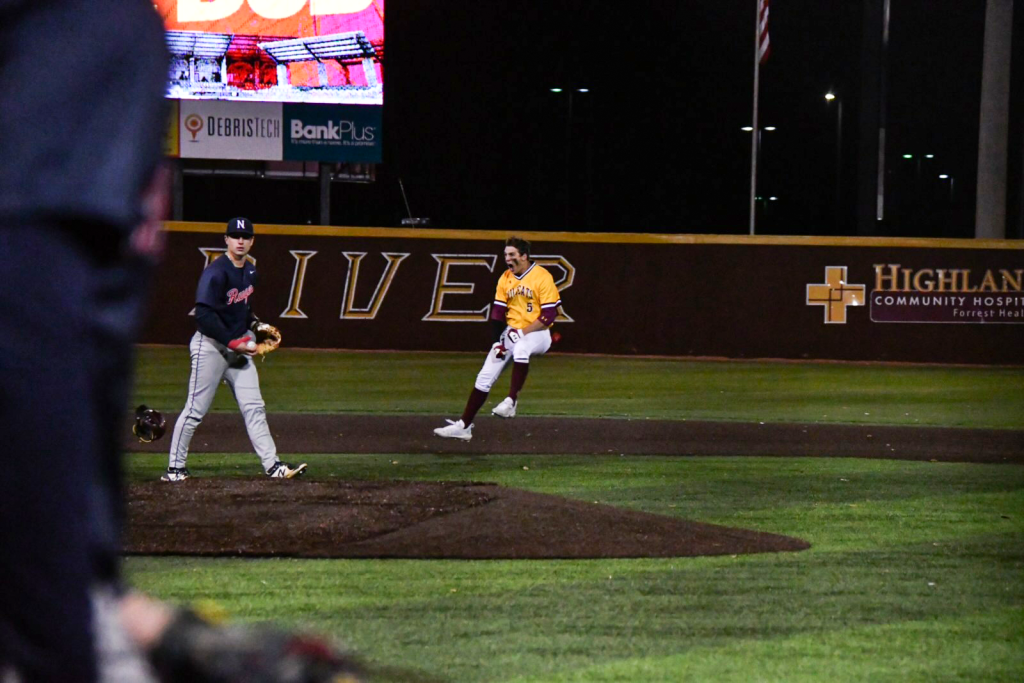 POPLARVILLE, Miss. — The No. 2 Pearl River baseball team welcomed Northwest into Dub Herring Park on Saturday for the first MACCC doubleheader of the season. The teams battled to a split with the Rangers taking game one 6-4 and the Wildcats winning game two on a walk-off single, 10-9.

“I thought that we played hard today. Northwest is a really good team, and I knew coming into the game they had some really good arms. They threw the ball extremely well,” head coach Michael Avalon said. “I’ve challenged our guys to get tough. This was a tough day and I thought that we got a lot tougher as the day went on. Hopefully we can grow from this and get better because of it. That’s a good club and I am glad we found a way to get a win in the end.”

GAME ONE
Turner Swistak (Hattiesburg; Oak Grove) got the start in game one and pitched a scoreless first inning.

Gabe Broadus (Wilmer, Al; Faith Academy) opened the scoring for the Wildcats (12-4 overall; 1-1 MACCC) in game one as he came around to score on a groundball by Alex Perry (McComb; North Pike).

Northwest (11-7; 1-1) retaliated immediately after, scoring two in the top of the second inning to lead 2-1.

The Wildcats answered in the bottom of the third as Broadus again came around to score, this time on an RBI base hit from Tate Parker (Gulfport; West Harrison).

The Rangers extended the lead out to 4-2 off a two-run homer.

The Wildcats tied things up in the seventh as Preston Soper (Madison; Germantown) came around to score on a groundout by Parker, followed by a wild pitch that scored Taylor Woodcock (Pass Christian; West Harrison).

Northwest again took the lead in the top of the eighth on an RBI triple, but Cole Tolbert (Laurel; West Jones) was able to work out the jam to limit the damage.

The Wildcats loaded the bases in the bottom of the inning but were turned away by the Ranger pitcher.

Northwest added an insurance run in the ninth and rode the momentum to victory, taking game one 6-4.

Parker led the Wildcats in game one with two hits. He also drove in two runs.

Broadus, Mercer, Walters, and Soper all had a hit each. Broadus scored two runs. Perry drove in a run in the contest.

GAME TWO
The Rangers struck first in game two getting an RBI single, but the Wildcats answered in the bottom of the first on a Matt Mercer (Richton; Petal) sacrifice fly.

The Rangers added three more in the third, pushing the lead out to 4-1.

Pearl River immediately answered, getting a sacrifice fly from Soper and bases-loaded walks from Mercer and D.K. Donaldson (Gulfport; West Harrison) to tie the score 4-4.

The Rangers snatched the lead back with a three-run home run in the fourth to go ahead 7-4.

Pearl River got a run back in the bottom of the fourth on Woodcock’s first home run of the year, cutting the deficit to 7-5.

Northwest added some insurance in the fifth, pushing the lead to 9-5.

Pearl River tied things up in the bottom of the sixth, plating four runs as Donaldson started the scoring by getting home on an error by the second baseman. Shortly after, a Parker single drove in Ryan Burt (Columbus; New Hope) and Mercer followed it up with another bases-loaded walk. The scoring wrapped up with a Soper sacrifice fly that scored Parker.

Landen Payne (Ocean Springs; St. Martin) struck out the side in order in the top of the seventh to give Pearl River a chance to walk it off in the bottom of the inning.

The first two Wildcats went quietly in the inning, but then Woodcock got into scoring position with a two-out double. Broadus then stepped up to the plate and smacked the first pitch he saw into left field to bring home Woodcock for a 10-9 walk-off victory.

Sam Hill got the start for the Wildcats in game two and pitched 2 1/3 innings, giving up two runs on five hits. He also struck out three batters.

Payne got the win in relief, pitching two innings and allowing no runs on two hits. He also struck out five batters.

Parker collected two hits on the night, driving in a run. Woodcock also had two hits and scored three runs. He drove in a run as well. Broadus and Perry had a hit each, with both adding two RBIs each. Mercer finished with three RBIs. Donaldson also collected an RBI.

UP NEXT
The Wildcats are set to hit the road on Tuesday to face Jones College for a 3 p.m. first pitch, but the game could potentially be moved due to expected inclement weather.