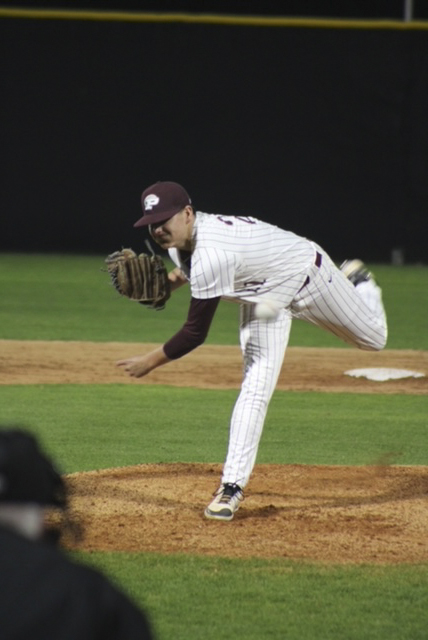 Brady Robertson throws one of his no-hitting pitches during the Maroon Tides’ win over the Gautier Gators on March 4.

On March 4, the Picayune Maroon Tide baseball team secured a 10-0 win over the Gautier Gators. The star of that game was sophomore pitcher Brady Robertson, who threw his first no-hitter game of his career. Robertson faced 20 Gator batters that night and struck out 10.

Maroon Tide baseball Head Coach Evan Nichelson said, “that was his third outing and he’s improved each outing, he’s put a lot of work in…hopefully he can take that success and keep building.”

Through the last 14 games Robertson started four and Nichelson predicts his young star pitcher will only get better.

“He’s a completely different kid, he’s put a lot of work in throughout the fall and you can see it paying dividends,” he said.

A no-hitter performance is hard to come by, especially from young talent. It was a moment that left this humble young talented pitcher in a state of disbelief.

“Honestly it was surreal, it didn’t seem like it actually happened but, people were talking to me about it, and I couldn’t really believe it. I mean, I knew what I did I just couldn’t believe it,” said Robertson.

Every athlete knows when he or she is in their zone and feel unstoppable. The moment when Robertson felt that he could actually accomplish a no-hitter performance was when he stuck out the Gautier Gators’ best hitter. At that point Robertson was in his zone.

“Not trying to be cocky when I say this but when I struck out their best player it was just like, ‘dang, I can do this,’” he said.

“I felt a lot of confidence coming in and I don’t know if it was arrogance or what but a little bit of cockiness started coming out and my pitching coach (Taygen Whitten) was telling me ‘stay quiet, God’s doing this for you’… he was saying God was using me as a picture for everybody else to see that this could be done.”

“My confidence is very high, I had a lot of people expect me to throw another no-hitter, I knew inside that probably wasn’t going to happen but you always want to strive for that,” he said.

“It was a lot of pressure building up around me, people saying ‘You ready to throw another no-hitter?’ and stuff like that. I was really thinking about doing my job for my team, my family and God.”

Robertson said he is doing a good job of not letting the outside noise get to him too much or distract him from the team’s goals for the pursuit of individual accolades. His pitching coach, Whitten, has been a great help in keeping Robertson calm and collected.

“Really, who helps me stay calm is my pitching coach, I know he’s been through a lot of these moments, and he knows how to keep me calm and keep my head on a swivel and keep me straight. He really helps me a lot. Honestly, I give my props to him and God. ‘Cause that who really made me who I am right now.”

Robertson and the rest of the Maroon Tide has another game on March 14, as they’ll play the East Central Hornets at East Central High School. They’ll then play the Hornets again at home on Friday at 7 p.m.