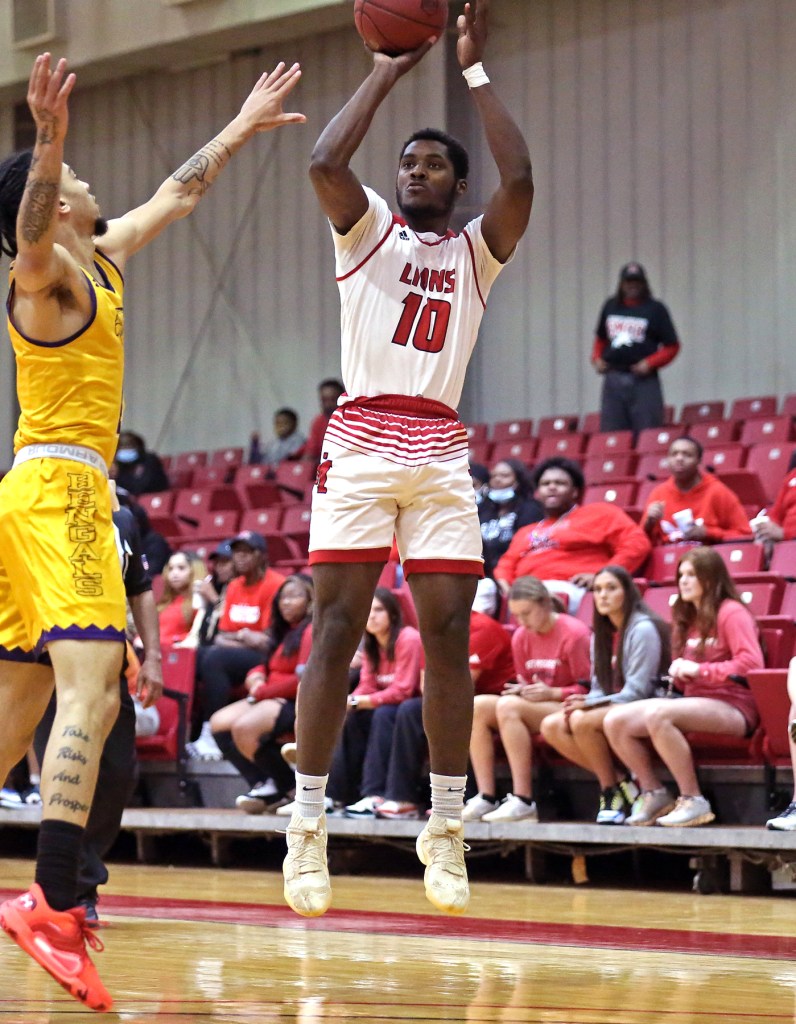 After knocking off 13th-seeded Itawamba, 59-55, during Monday’s second-round regional tournament action played in Scooba, the Lions welcomed fifth-seeded LSU Eunice to EMCC’s Keyes T. Currie Coliseum the following night for a chance to move on and compete in Friday’s semifinals at Mississippi College’s A.E. Wood Coliseum. Despite a career-high 36 points (27 after halftime) from two-time all-conference forward Jakorie Smith, the Lions dropped a heartbreaking 76-73 overtime decision to the Bengals during Tuesday’s regional quarterfinals.

Playing at home for the second straight night to begin regional tournament play after winning the MACCC Tournament title, Feb. 22-24 in Poplarville, EMCC held the advantage for most of the opening half of play against LSUE. After going up by as many as seven points (18-11) following a Smith three-pointer at the 11:12 mark, the Lions lost the lead during the final five minutes of the half before knotting the score at 29-29 on Jacob Reese’s put-back basket at the halftime buzzer.

An early 8-0 run by the visitors following the break helped put LSU Eunice in command for the majority of the second half. Consecutive made treys by Isaiah Payne and Jordan Hayes ignited a 15-2 rally that lengthened the Bengals’ lead to 58-45 with 7:13 remaining. Moses Nuangki capped the LSUE run with a three-point play followed by a made trey.

With LSU Eunice still in front by double digits (61-51) around the five-minute mark, Smith continued his impressive second-half scoring flurry to practically keep the Lions in contention single-handedly. After completing a trio of three-point plays earlier in the half, he followed later with back-to-back floaters in the lane as well as hitting his fifth trey of the game to help cut the EMCC deficit to 64-62 with 1:49 left in regulation. Smith then hit a pair of free throws with just under a minute left to cap off a 25-point second half for the Utica native and keep it a two-point contest.

After Blake Butler’s drive to the basket sent the game into overtime tied at 66-66, Nick Walker’s fourth put-back basket of the night temporarily put the Lions on top for the final time. LSUE’s Payne answered by hitting a three-pointer and then following with a driving bucket to the rim to put the Bengals up by their winning margin of three points (61-58).

The Lions cut the deficit to a single point twice during the final two minutes of overtime action. After Danny Washington split a pair of free throws to make it 74-73 with 37.4 seconds remaining, LSU Eunice maintained ball possession after a missed three-pointer went off an EMCC player. Payne capitalized by sinking two critical free throws with just 4.7 ticks left. The Bengals then applied backcourt pressure on the game’s final play to cause a game-ending turnover that snapped EMCC’s five-game winning streak and presumably ended the Lions’ postseason run.

Smith’s 36-point explosion consisted of 12-of-24 shooting from the field, including 5-of-8 accuracy from beyond the three-point arc, and a perfect 7-of-7 from the charity stripe. Butler, the reigning MACCC Player of the Week for his conference tournament performance, followed with 13 points despite playing most of the second half with an eye injury. Walker registered his 12th career double-double (seventh this season) with 11 points and 13 rebounds for head coach Billy Begley’s 21-7 EMCC Lions.

LSU Eunice was led by Payne and Hayes with 31 and 19 points, respectively.

The previous night in the four-point home win over Itawamba, Butler led all scorers with 21 points on 5-of-9 shooting from three-point range. Smith recorded his 21st career double-double (ninth this season) with 12 points and also a dozen rebounds.

The Lions never trailed the Indians in their regional tournament opener on Monday. After maintaining a 29-19 halftime lead, EMCC stretched the margin to 13 points (57-44) by the 3:33 mark of the second half before visiting ICC made a late-game run. Daniel Mayfield’s nine points over the game’s final three minutes helped cut Itawamba’s deficit to just two points before Washington’s two free throws with 19.2 seconds remaining sealed the Lions’ second-round victory.

Mayfield finished with a team-high 15 points off the Itawamba bench and Fred Cleveland Jr. added 14 points.