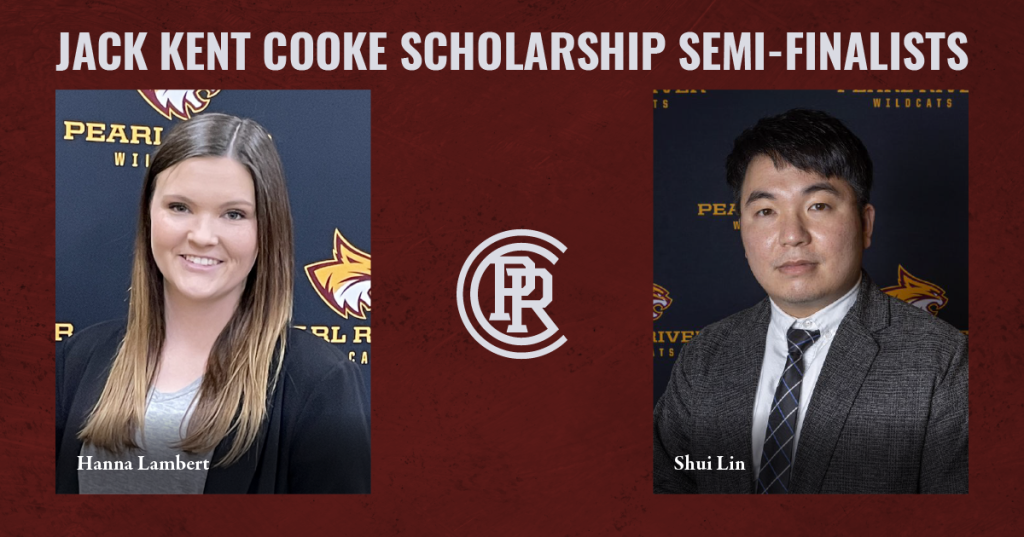 POPLARVILLE, Miss. — The list of semifinalists for the prestigious Jack Kent Cooke Undergraduate Transfer Scholarship has been released and two students at Pearl River Community College have made the cut. Hanna Lambert and Shui Lin, both students at the Forrest County Campus, are this year’s semifinalists from PRCC.

This highly competitive scholarship is awarded to the nation’s top community college students seeking to complete their bachelor’s degrees at four-year colleges or universities. The award covers a significant portion of their educational expenses, including tuition, living expenses, books and required fees.

Awardees can receive up to $55,000 per year for two to three years at a four-year accredited undergraduate school for any area of study. They do need to meet a financial need requirement to be considered for the scholarship.

This year, the Jack Kent Cooke Foundation received more than 1,200 applications for the scholarship and named 440 as semifinalists.

“I am honored to have worked with our Jack Kent Cooke semifinalists, Hanna Lambert and Shui Lin,” said On-Line English Instructor and Phi Theta Kappa

Advisor Dr. Terri Ruckel. “Both of these students are deserving of this recognition and of being one step closer to receiving the largest transfer scholarship in the nation.

“In my estimation, these students are dream students. They are hard-working, passionate about serving the college and the community, and, like so many students at PRCC, they find a pathway to success. Pearl River Community College consistently produces the highest caliber of students in the nation.”

Lambert is from Richton where she graduated from Richton High School. During that time, she was a member of the Beta Club and Science Club while also being named to the honor roll each year.

As a PRCC student, she has been an active member of the Dr. William Lewis Honors Institute, the Beta Tau Gamma Chapter of Phi Theta Kappa, and the Science

Club. This year, she has served as the President of the Student Government Association.

“I feel like I am a part of a family when I walk through any door at PRCC. I would not be where I am today if it wasn’t for the wonderful instructors and advisors that I have had the privilege of meeting over the past two years. “

She is on a STEM pathway with plans to attend Mississippi State University in the fall. Her goal is to become a Doctor of Veterinary Medicine.

“It means the world to me to be considered a JKC semifinalist,” said Lambert. “Since I started at PRCC, I have dreamed of receiving this award and recognition.

“I have worked hard every semester to make sure I am taking the necessary steps toward achieving this wonderful goal. I have applied myself in more ways than I ever thought I could, and I hope to be named a finalist.”

Lin is an immigrant from China who moved to Hattiesburg four years ago where his sister lives. He worked for a few years to save up money to attend college. Pearl River Community College has been his first school experience in the

At PRCC, Lin has been preparing for a degree in mathematics and computer science. His big dream is to become a medical doctor, something rekindled after seeing the deaths and tolls experienced by the medical professionals during the last two year. Alternatively, he may pursue the goal of becoming a college professor. Working in the Student Success Center, he found a passion for helping students struggling in STEM subjects.

Along with his studies and work, Lin is extremely active on campus. He is an active member of the Dr. William Lewis Honors Institute, the Beta Tau Gamma

“What excites me most about being a PRCC student is that there are some of the best instructors and advisors in the world,” said Lin. “I am so lucky because every instructor I have met at PRCC has been so patient in helping me step by step towards academic success. Not only did they answer any questions I had during work hours, but they also even sacrificed their time outside of work for my academic success.

“They are like my family in school. Therefore, advisors and instructors are one of the most successful parts of PRCC and will continue to shine and help more students succeed.”

a final decision of where he will attend. Given that his income puts him below the poverty line, he will have to defer his education without the help of scholarships like this one.

“When I first heard about this scholarship, I thought it was a whole other planet thing for me,” said Lin. “As a non-native English speaker in an American school for the first time in my late 20s, I even was surprised to be eligible for this scholarship.

“Fortunately, I met so many people who helped me in my college. For example, my advisor is always encouraging and helping me to become a better person.  Therefore, I am so grateful for the surprise to this loving society. If I don’t win this scholarship, it also would be a great honor in my life.”

Last year, Pearl River Community College had three Jack Kent Cooke scholarships awarded to students. This was a record number of awardees for the school.

For the latest news on Pearl River Community College, visit PRCC.edu and follow us on Twitter (@PRCC_Wildcats),