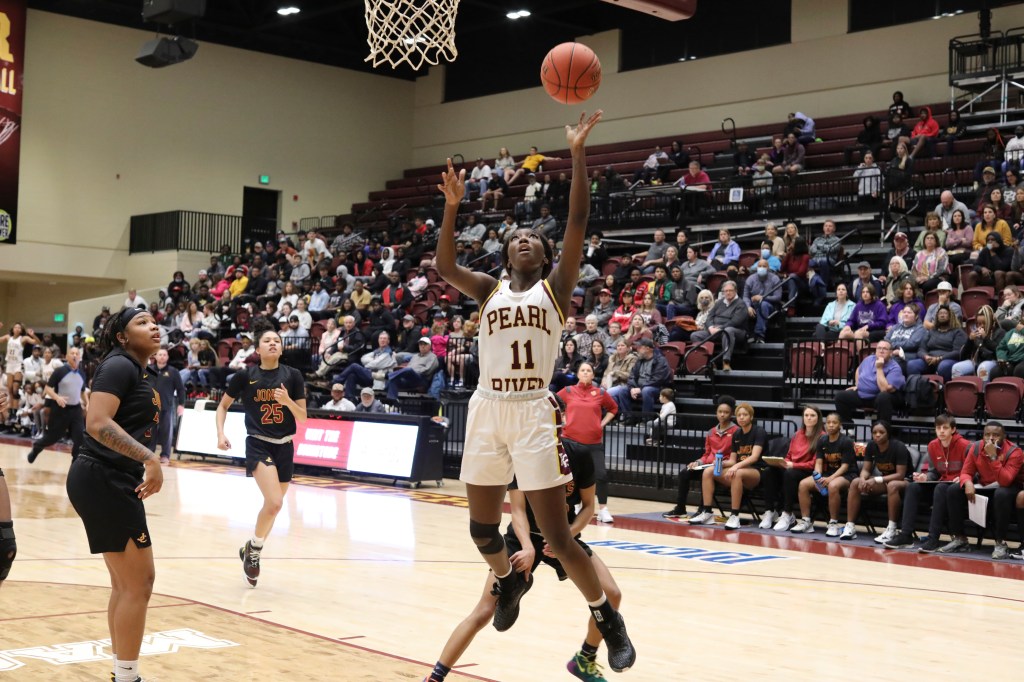 POPLARVILLE, Miss. — The Pearl River women’s basketball team got back in the win column Monday night inside Marvin R. White Coliseum, taking down Northeast 67-56 in round one of the Region XXIII tournament.

The victory was the Wildcats’ 20th of the season, a mark that had not been reached since 2003.

“It’s a game of runs. I just thought we left too many points on the table,” head coach Scotty Fletcher said. “We did shoot the free throw well. We were pressing a little bit and we put a little pressure on ourselves. Northeast came here playing very free and had a lot of flow. We didn’t have that same flow at times. After back-to-back overtime losses, it’s great to bounce back with a win.

FIRST QUARTER
Pearl River (20-5 overall) opened the scoring with just over seven minutes on the clock. Keshunti Nichols (Pearl) caught a pass and drove into the lane for the layup. Nichols followed the offensive play up by making a big defensive play. As Northeast (6-19) moved the ball down the court, the Tigers found a wide-open player in the corner. Nichols dashed down the court and jumped to swat the shot attempt out of the air.

PRCC then took a 5-0 lead as Ty’Mesha Reed (Meridian) drained a 3-pointer as the shot clock was expiring.

A few minutes later, the teams found themselves locked in an 8-8 tie. The score didn’t remain tied for long as Otashae Burrage (Carthage; Leake County) caught a pass in the corner and drained a 3-pointer to make the score 11-8. Marcavia Shavers (Biloxi) then backed her way into the lane and put a ball up and in to take a 13-8 lead.

Later in the quarter, the Wildcats went ahead 20-10 after back-to-back layups from Nichols, eventually taking a 21-10 lead into the second.

SECOND QUARTER
The Tigers opened the scoring in the second quarter, but Shavers made consecutive layups to make the score 25-12.

Nichols continued her great start to the day, getting a basket back with a layup. The sophomore then turned defense into offense by plucking a pass away and dribbling down the court for a layup that made the score 31-21.

The teams got into a back-and-forth battle as Pearl River carried an eight-point 33-25 lead into the break.

THIRD QUARTER
The Wildcats got on the board to begin the third as Nichols picked up an offensive rebound before putting it in the basket to extend the lead to 35-25.

NEMCC fought back to slice the lead to just five points at 35-30. Tristen Washington (Gonzales, La.; East Ascension) went 2-for-2 from the free-throw line shortly after to make the score 37-30. The Tigers got another layup but a corner 3-pointer from Burrage put Pearl River on top 40-32.

A few moments later, Burrage knocked down her fourth 3-pointer of the night, catching a pass on the wing and nailing it to take a 43-33 lead.

PRCC continued to find points, getting offensive rebounds and putbacks from Nichols and Halle Traylor (Tupelo) that made the score 53-39.

Brandy Scott (Hammond, La.) grabbed the last basket of the third quarter as she sliced through the defense and laid the ball up and in for a 59-39 lead.

FOURTH QUARTER
Northeast knocked down a 3-pointer once the action started back, but a layup and a 2-for-2 trip to the free-throw line for Scott made the score 63-42.

A Nichols layup and 2-for-2 trip to the free-throw line for Burrage gave Pearl River a 67-46 advantage.

NEMCC went on a small run to end the game, but it wasn’t enough as the Wildcats claimed a 67-56 victory.

BY THE NUMBERS
Nichols led the Wildcats in scoring, tallying 18 points. She finished one rebound shy of a double-double with nine. In addition to her stellar offensive play, she was good on defense as she blocked four shots and tallied three steals.

“She’s a soldier,” Fletcher said. “I’m glad she’s wearing the maroon-and-gold across her chest. She did a phenomenal job tonight. I wish I had 25 of Keke. She’s a coach’s dream. She’s the X-Factor and does a great job.”

Burrage and Shavers both finished in double figures with 15 and 12 points, respectively. Shavers finished the night with a double-double, collecting 11 rebounds.

Amaijah Smith (Gulfport) had five assists and Washington had four.

NEXT UP
PRCC returns to action tomorrow, hosting Itawamba in the second round of the Region 23 Tournament. Tipoff is set for 5:30 p.m.