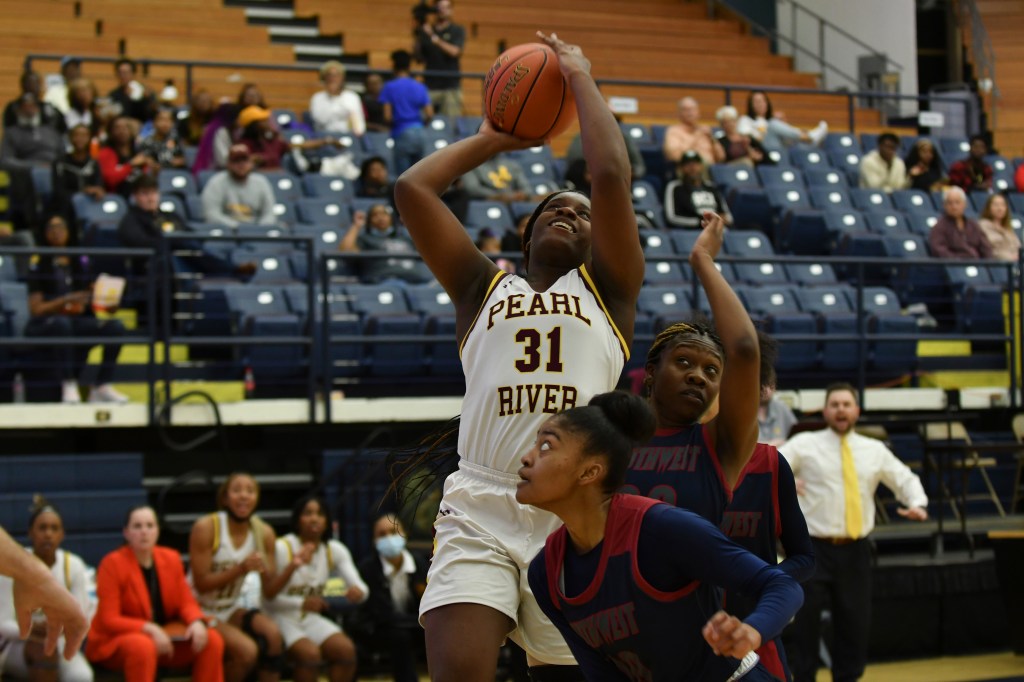 CLINTON, Miss. — The final score doesn’t tell the story of the back-and-forth game that took place Thursday inside A.E. Wood Coliseum at Mississippi College. The Pearl River women’s basketball team received a momentum boost late in the fourth quarter to ride out a 62-50 victory over Southwest in the Region XXIII semifinals.
The victory sends the Wildcats to their first Region XXIII title game since winning it in 2003. The win also sets up a Region XXIII final ‘Cat Fight’ against rival Jones College Saturday at 4 p.m.
“When you see that we won the game by 12 points, it didn’t feel like a 12-point victory. It really didn’t,” Pearl River coach Scotty Fletcher said. “We did some good things on the glass and we got some key stops. Those stops were critical to our game success, especially at the end. It wasn’t our best effort defensively, but we held them to 50 points and any time that you can hold a team to 50 points you’ll take it.
On offense, I knew that once we got the ball to the high post and were able to attack the corners, things would open up for us.”
Fletcher was proud of the effort of his team after the victory.
“Those are soldiers in that locker room and I’m glad they are Wildcats,” he said. I always say coaches call plays, but players make them. They make my job a lot easier.”
FIRST QUARTER
Pearl River (22-5 overall) jumped out to a four-point lead at 6-2 after Keshunti Nichols (Pearl) grabbed an offensive rebound and put it back up an in.
Southwest (18-9) fought back to take the lead at 11-9 on a 3-pointer from the top of the key.
The Wildcats then went on a 9-0 run started by Otashae Burrage (Carthage; Leake County) knocking down her first long ball of the night. Nichols then fought her way through traffic before getting a layup to fall. After SMCC was given a technical fall,
Halle Traylor (Tupelo) got her free throw to fall. Burrage ended the run by hitting her second 3-pointer of the night, putting Pearl River ahead 18-11.
Before the first quarter of play ended, Southwest was able to get a shot to fall from beyond the arc, giving the Wildcats an 18-14 lead heading into the second.
SECOND QUARTER
The game of runs continued into the second quarter of play. The Bears battled back with a 7-2 run to take a 21-20 lead.
Another Wildcat run propelled them to a seven-point 28-21 lead. The run was highlighted by Brandy Scott (Hammond, La.) driving the lane, avoiding a defender, and tossing the ball off the backboard and into the net as well as Bryanna Taylor (Terry) taking hard contact from a Bear defender but getting her layup to fall.
SMCC added on two points, but Washington then made one of the plays of the night to send the Wildcats to the break with a 31-23 lead. The Northwestern State transfer hit a nifty dribble move to lose a defender but didn’t like the shot opportunity she had. After the defender recovered, Washington lost her again by faking a drive before stepping back across the arc and promptly nailing a 3-pointer.
THIRD QUARTER
The Bears were able to get three points back to open the quarter, but Burrage pushed the Pearl River lead out to 10 points at 36-26 moments later.
The sophomore weaved her way around a couple of Southwest defenders and make a layup despite a hard foul from a defender. She then knocked down her free throw attempt.
SMCC fought back once again, closing a big gap to take a 42-40 with two free throws.
The momentum looked like it was all in the favor of the bears after the basket, but Washington flipped the switch just before the third quarter buzzer as she hit a fade-away 3-pointer from the corner to put the Wildcats ahead 43-42.
FOURTH QUARTER
Fueled by the huge Washington basket, it was all Wildcats in the final quarter of action.
Marcavia Shavers (Biloxi) got the first basket of the quarter to fall despite taking a shot from a Bear defender. Burrage then was fed a pass by Scott and busted a 3-pointer, despite having a defender draped all over her. Ty’Mesha Reed (Meridian) then got a floater to fall and Shavers made another basket. Pearl River suddenly had one of its largest leads of the night at 54-43.
The Bears had a chance to claw back in the game late, but a big defensive play from Nichols kept them off the board.
After the Wildcats turned the ball over, SMCC quickly tried to get numbers up court. A player appeared wide-open in the corner, but Nichols flew in from out of nowhere to slap the shot attempt away, keeping the score at 56-49.
Two perfect trips to the free-throw line for Burrage and Washington proved to be the dagger as the Wildcats claimed the game 62-50.

LEADING THE WAY
Nichols was electric for the Wildcats, nearly collecting a double-double. She finished the night with nine points, 12 rebounds, and two blocks.
“Keke is a warrior,” Fletcher said. “What’s crazy is that I didn’t think she was as fresh and ready to play as I’ve seen in the past and she came out and played like that.”
Burrage finished the night with 14 points and five rebounds.
Brandy Scott finished with eight points and a rebound while playing solid defense.
“I thought Brandy Scott was really good,” Fletcher said. “Her presence offensively and defensively was really good.”
Taylor had eight points and four rebounds on the night.
“BT was phenomenal tonight,” Fletcher said. “We’ve been talking about soldiering up and she was an absolute soldier tonight.”
TUNE IN
All Pearl River basketball games are livestreamed for free at PRCCMedia.com/gold. Fans who have Roku, Amazon Fire or Apple TV devices can also watch the Wildcat broadcasts by downloading the “Pearl River CC” channel from their app stores.
Games can also be heard on WRJW 1320-AM, 106.9 FM and WRJWRadio.com.
For the latest on Pearl River Community College athletics, follow us on Twitter (@PRCCAthletics) and Facebook (PRCCAthletics).