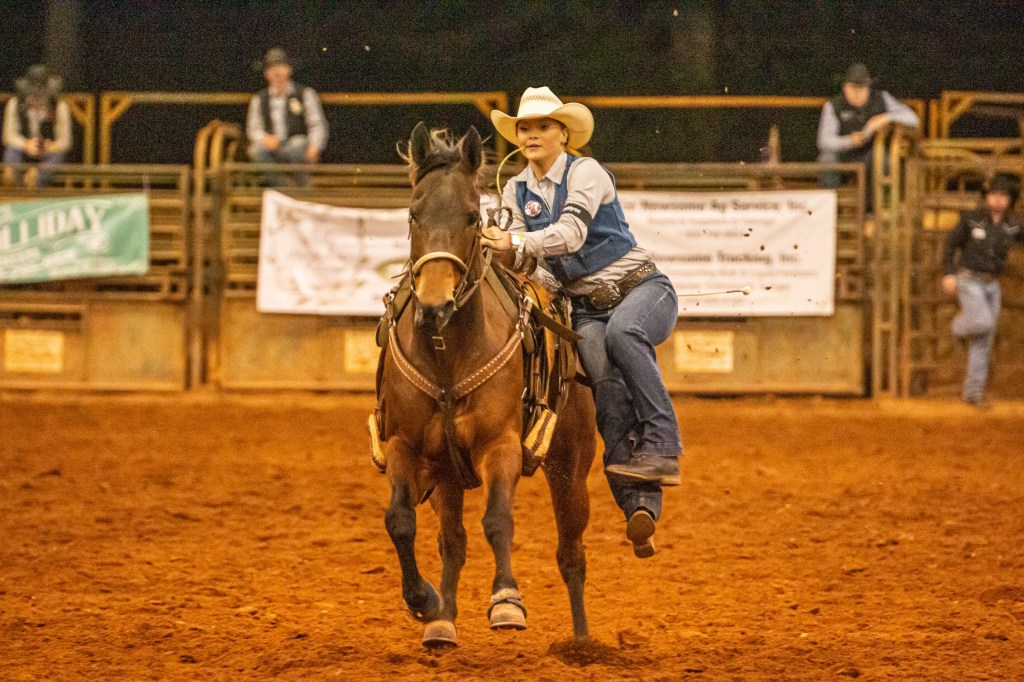 “This weekend was really exciting. We had a good crowd each night,” coach Frank Graves said. “The community really came out and helped us, so it was exciting. It’s great to see it grow the way it is growing in the couple of years that we have done it. The livestream that we had is really going to help us going forward. The community and sponsors that stepped up and helped us out were great. The people who came to the rodeo helped build the excitement.”

RESULTS
In calf roping, Roper Stoots (Louisville) took home third place. Kason Davis (Poplarville) had a great first round as he grabbed second place with a time of 9.5; however, he wasn’t able to register a time in the second round.

Like Davis, Molli Rae Kinchen (Tickfaw, La.; Ponchatoula) registered a good time in her first-round attempt but registered no time in the second.

One of the best performances of the weekend came from Sarah Bootyy (Osyka; Amite County). The sophomore grabbed first place in goat tying with times of 7.2 and 7.1.

“Sarah is second in the region in goat tying,” Graves said. “She’s done well all year and she’s really good at goat tying. She’s been really working at it to stay in the top three so that she can make it to nationals.”

Davis again competed in team roping and took home fourth place with times of 6.2 and 7.1. Koby Sanchez (Ethel, La.) and Bryce Graves (Poplarville) tied for fifth place in the event with times of 5.8 and 10.8. Jeb Stewart (Lucedale) and Blake Lyons (Ethel, La) were sitting in first place after their first run but did not register a time in the second round.

NEXT UP
The Wildcats return to action April 7-9 at the University of Tennessee-Martin rodeo in Martin, Tenn.