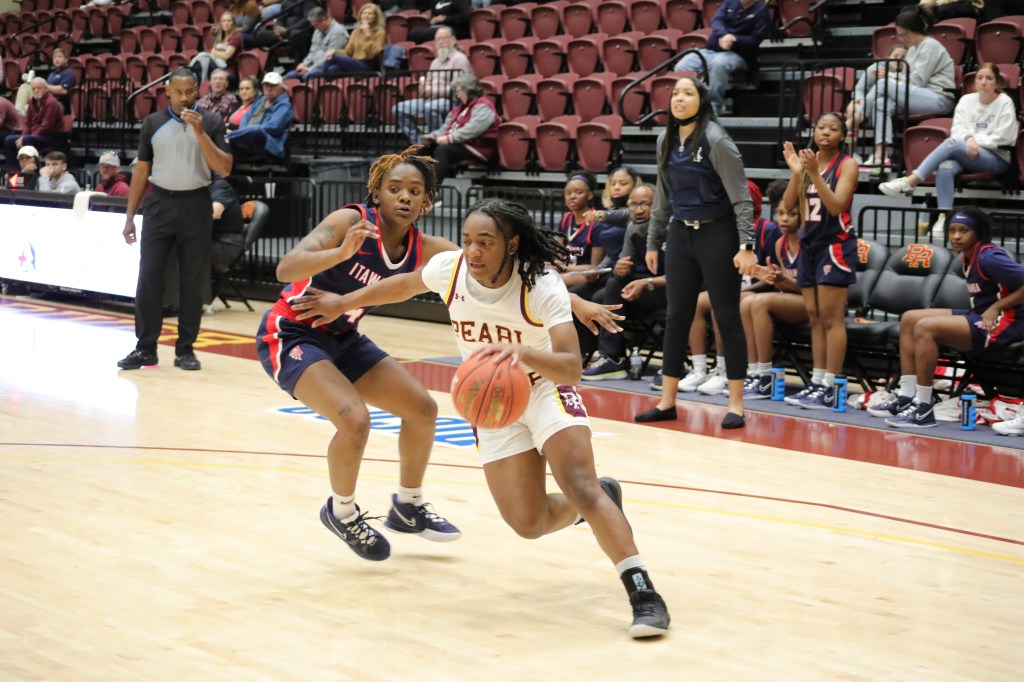 POPLARVILLE, Miss. — It came down to the wire for the Pearl River women’s basketball team Tuesday night, but clutch free throws powered the Wildcats to a come from behind 57-55 win over Itawamba, sending them to the Region XXIII semifinals for the first time under head coach Scotty Fletcher.

“We knew they were extremely talented and extremely well-coached,” Fletcher said. “Itawamba ended our run in 2020. They’ve had our number, so it was great to get back in that win column against a team that has a rich history. I was just so proud of our girls. I thought they displayed a lot of toughness and made some big shots late. We didn’t panic and got big stops. We didn’t play our best last game but tonight I thought we executed really well on both ends of the court. Our transition defense was not as fluid as it needed to be.”

The Wildcats suffered a tough loss in the MACCC quarterfinals but immediately went to work in preparation for the tournament.

“When we lost last week, we started that night planning for regionals,” Fletcher said. “That very night we started planning and for us to be in this position right now is incredible. This is only the second time since I’ve been here that a team has been to Clinton. I’m just so proud of our girls.”

FIRST QUARTER
The first four points for Pearl River (21-5 overall) came from Brandy Scott (Hammond, La.). She opened the game by driving down the lane between two Itawamba (15-10) defenders and got a layup to fall. On the next play,

Tristen Washington (Gonzales, La.; East Ascension) hauled in a rebound and lobbed a pass down court to the sprinting Scott who laid it up and in.

The Wildcats took a 6-0 lead a few plays later when Ty’Mesha Reed (Meridian) drove inside and dished to Bryanna Taylor (Terry) for an easy layup.

PRCC eventually took a 9-7 lead into the second quarter.

Itawamba opened the second quarter by nailing a 3-pointer and drawing a foul. The Indians converted the and-one to take an 11-9 lead.

Marcavia Shavers (Biloxi) tied the game up shortly after with a contact layup. ICC then took a 17-11 lead after knocking down a 3-pointer and converting an old-fashioned 3-pointer.

The Indians continued to add on to their lead, building out a 23-14 advantage.

ICC continued to find baskets as the half was coming to a close, taking a 27-17 lead into the midway point.

THIRD QUARTER
The Indians opened the scoring in the third quarter, but the Wildcats clawed back to cut the deficit to five points at 29-24. The run begain with Scott driving into the lane for a layup. Reed followed it up by getting her own rebound and putting it back up and in. Scott then got a steal on the defensive end and took it down the court for a layup shortly after. Shavers then went 1-for-2 from the free-throw line.

The teams continued to trade blows before Pearl River tied the game up 37-37 with just over one minute left in the quarter on a Shavers layup.

ICC went ahead 41-37 late in the quarter, but Washington pulled PRCC within one at 41-40 shortly after. She missed both of her free-throw attempts, but Taylor got the offensive rebound and dished out to Washington who nailed a 3-pointer at the buzzer.

FOURTH QUARTER
The Indians opened the quarter by knocking down a corner 3-pointer to take a 44-40 lead.

Taylor then got a layup to fall before making a big play on the defensive end. An ICC player drove inside and Taylor swatted the shot attempt out of the air. Nichols picked up the rebound and took it down the court to tie the game 44-44.

Itawamba snatched the lead right back with a 3-pointer, but Burrage got fouled on her shot and then converted the and-one to tie the game up. On the next offensive possession, Burrage nailed a step-back jumper to put Pearl River on top 49-47.

Back-to-back layups from the Indians gave them a 55-54 lead with 21.7 seconds left in the contest.

With 10.4 seconds remaining, Burrage drew a foul on her 3-point shot attempt and knocked down 2 of 3 from the free-throw line to put the Wildcats back on top 56-55.

The Indians had a chance to tie up the game, but Nichols blocked the shot to keep them off the board.

Halle Traylor (Tupelo) was then fouled as ICC tried to get another chance at scoring. Traylor knocked down one of her free throws to put Pearl River on top for good at 57-55.

STATISTICALLY SPEAKING
Shavers and Scott tied for the team lead in points with 12 apiece.

Washington had 11 points and Burrage finished with 10.

Shavers was one rebound shy of a double-double, tallying nine. Nichols hauled in eight rebounds.

NEXT UP
The Wildcats will take on Southwest in the Region XXIII semifinals Thursday at A.E. Wood Coliseum in Clinton. Tipoff is set for 7:30 p.m.

TUNE IN
All Pearl River basketball games are livestreamed for free at PRCCMedia.com/gold. Fans who have Roku, Amazon Fire or Apple TV devices can also watch the Wildcat broadcasts by downloading the “Pearl River CC” channel from their app stores.