No. 8 Pearl River’s great pitching leads to sweep of No. 17 Gulf Coast 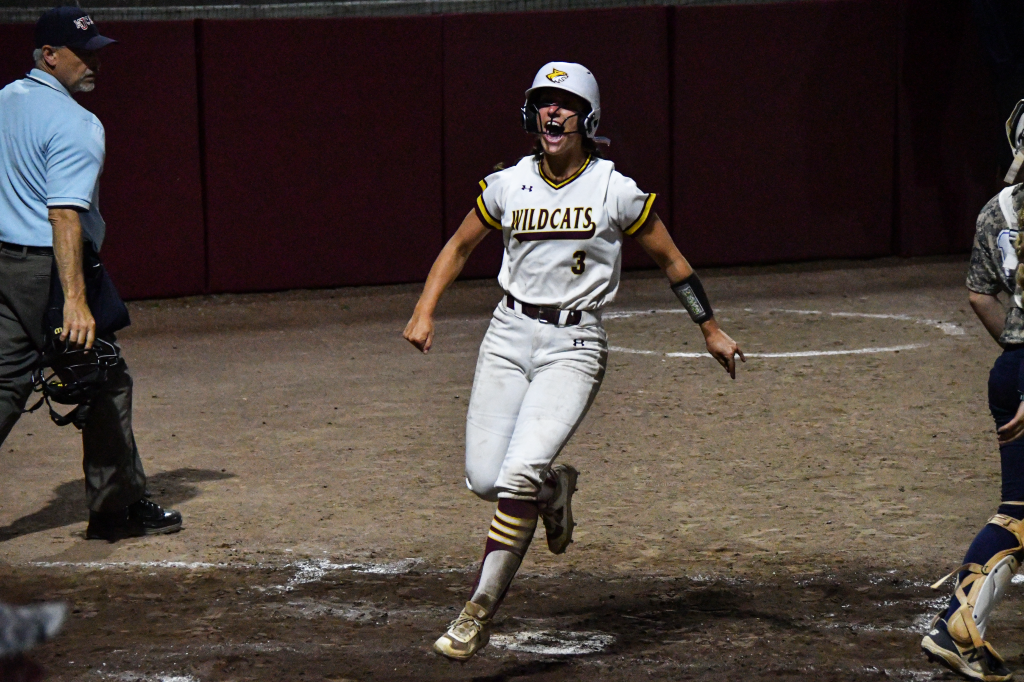 POPLARVILLE, Miss. — The No. 8 Pearl River softball team used a pair of great pitching performances to sweep archrival No. 17 Gulf Coast Tuesday evening. Pearl River won game one 6-0 and then took the nightcap 5-1 to up its winning streak to six consecutive games. The sweep is the first for the Wildcats over the Bulldogs since the 2018 season.

“I’m so proud of our girls,” head coach Christie Meeks said. “This team doesn’t let anything get to them and they stayed steady in everything they did. Our energy was electric tonight from the dugout to the field. We got fired up and stayed that way and it was awesome to continue to watch them grow.”

Meeks talked about the timely hitting for Pearl River after the game.

“One run is not enough against an offense like Gulf Coast,” she said. “In rivalry games, crazy things can happen so insurance runs were a key focus for us.”

Prior to the doubleheader, the Wildcats honored those who have served and are currently serving in the military as part of their Military Appreciation day.

“We are really thankful for all the men and women who came out tonight to be a part of our special night,” Meeks said.

GAME ONE
Both pitchers started game one relatively easily, retiring the side in order in the first. Brinson Anne Rogers (Statesboro, Ga.) walked the first batter in the second but proceeded to strike out the next three Gulf Coast (14-15 overall; 6-4 MACCC) batters in order to end the threat. Pearl River (18-9; 8-2) loaded the bases in the bottom of the inning but were turned away via a double play.

After Rogers again retired the side in order, the Wildcats broke through in the bottom of the third by way of a Hannah Miller (Kokomo; West Marion) sacrifice fly that scored Emily Rigney (Waynesboro; Wayne County).

Rogers’ streak of 20 straight hitless innings came to an end in the fourth as the Bulldogs grabbed back-to-back hits. The right-hander rebounded by striking out consecutive batters to end the threat.

Pearl River struck again in the bottom of the fifth as Miller launched a ball over the left field wall for her fifth home run of the season, increasing the lead 2-0. The Wildcats were not done there as two more runs crossed the plate to make it 4-0 after Keigan Pearson (Carriere; Pearl River Central) lifted a fly ball to right field that was misplayed by the Bulldog outfielder, scoring Janna Peterson (Poplarville) and Cassidy Cartwright (Poplarville).

Pearl River increased the lead in the sixth with another Miller sacrifice fly that scored Rigney and a flyball by Julianah Overstreet (Vancleave) that rolled in and out the glove of the diving centerfielder and allowed Taelor York (Choctaw; Clinton Christian Academy) to score.

Rogers came in and struck out two of three batters to close the door and give Pearl River a 6-0 victory in game one.

Rogers got the start and threw a complete-game shutout, striking out 12 in the process.

Miller was a force for Pearl River in game one collecting a hit and driving in three runs.

“Hannah had a day in game one,” Meeks said. “She really went off and we are proud of her and how consistent she has been.”

York and Pearson finished second on the team with two hits. Rigney led the team with three hits. She also scored two runs. Dallyn Nance (Nanih Waiya) and Overstreet finished with a hit each.

GAME TWO
Hannah Embry (Vicksburg; Porter’s Chapel) found herself in trouble in the first after a Bulldog batter reached on a double, but clutch pitching and strong defense ended the threat.

Gulf Coast struck in the bottom of the second on a groundout to grab a 1-0 lead.

From there, a pitcher’s duel ensued with both sides pitching into and out of jams.

The Wildcats tied things up in the fifth after Payton Lee (Picayune; Pearl River Central) tripled to lead off the inning and later came around to score on a York single.

Pearl River took the lead in the sixth with a big offensive outburst. It was started by three straight hits from Nance, Overstreet, and Aunie Rethmeyer (Belle Chasse, La.) that gave the Wildcats a 2-1 lead. The scoring continued as Madi Waters (Laurel; West Jones) scored on a passed ball and Bethany Fewell (Mendenhall) was hit by a pitch to increase the lead to 4-1. The scoring ended with a York walk that brought home Kallie Hunt (Picayune) and gave the Wildcats a 5-1 lead.

After two Bulldogs reached in the top of the seventh, Rogers entered in relief of Embry and retired the final two batters to give Pearl River the win, 5-1.

Embry was stellar for Pearl River, throwing 6 1/3 innings with three strikeouts. She consistently worked herself out of jams by relying on her defense.

“Hannah threw the ball fantastic,” Meeks said. “They had one hit early and ended up scoring off of it. They’re a great team that is extremely tough on offense, and I thought she did a fantastic job of keeping them off-balance.”

York and Lee led the team in hits with two apiece. Nance, Overstreet, and Rethmeyer all finished with a hit. York led the way with two RBIs.

Rethmeyer and Fewell both finished with an RBI each.

The Wildcats hit the road Saturday to take on East Mississippi. First pitch is set for 1 p.m. and the games will be livestreamed at EMCCAthletic.com/live.