No. 8 Pearl River shuts out East Central twice in sweep 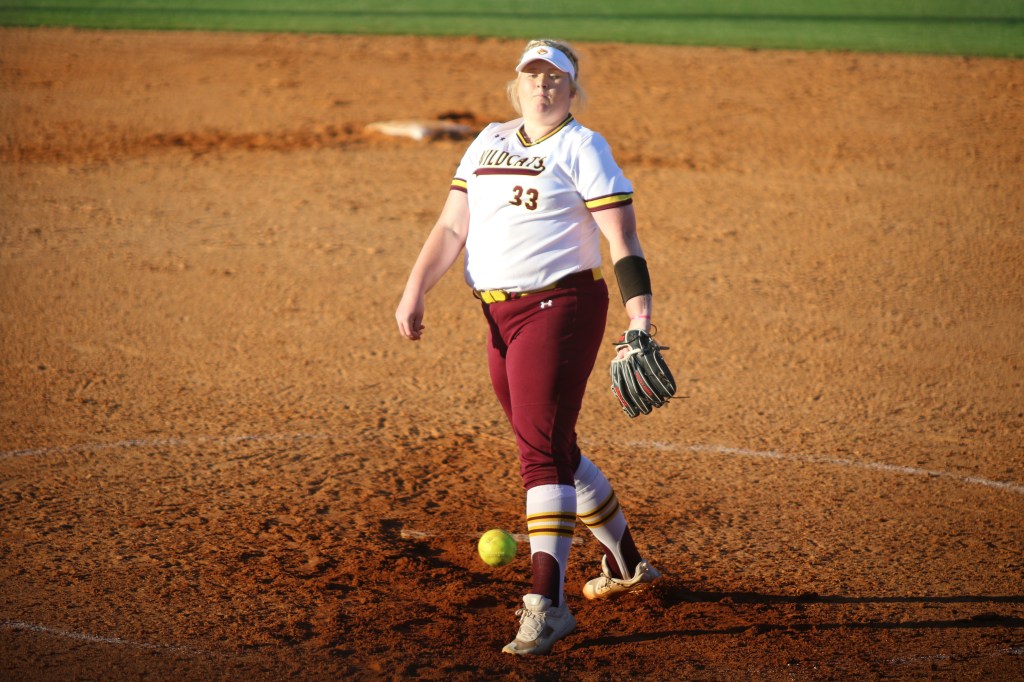 The Pearl River softball team shutout the East Central Warriors for 12 innings in Wednesday’s doubleheader, winning game one 2-0 off the back of a second consecutive Brinson Anne Rogers (Statesboro, Ga.) no-hitter and game two 14-0 in an offensive explosion.

“Today was big. I feel like this team is a family, and they celebrate each other’s success. It’s a fun atmosphere to be a part of,” head coach Christie Meeks said. “Our energy as a team was great in the field and in the dugout. I’m so proud of everyone today for fighting as a team and getting their first conference sweep.”

GAME ONE
The Wildcats (14-9 overall; 4-2 MACCC) threatened immediately by loading the bases but were turned away.

Brinson Anne Rogers (Statesboro, Ga.) retired the Warriors (15-11; 4-4) in order in the bottom of the inning to keep things scoreless heading into the second.

From there a pitcher’s duel ensued as neither team could manufacture any offense.

Pearl River finally broke the deadlock in the top of the eighth as Cassidy Cartwright (Poplarville) lined a single into center field, scoring Dallyn Nance (Nanih Waiya) and Julianah Overstreet (Vancleave) to grab a 2-0 lead.

“Cass had a huge at-bat to drive in those two runs and we are so proud of her and what she brings to the team,” Meeks said.

Rogers continued her early season dominance tossing eight scoreless innings and completing her second no-hitter in as many starts. She also tallied 15 strikeouts for her fourth straight double-digit strikeout game.

She currently sits second in the nation with 145 strikeouts.

Taelor York (Choctaw; Clinton Christian Academy) and Cartwright lead the way for Pearl River with two hits each. Cartwright drove in both of the Wildcat runs.

GAME TWO
The Wildcats wasted no time in game two as York reached to lead off the contest and Hannah Miller (Kokomo; West Marion) promptly deposited a ball over the centerfield wall, giving Pearl River a 2-0 lead. Nance singled immediately after and was then driven in by Aunie Rethmeyer (Belle Chasse, La), increasing the lead to 3-0.

Hannah Embry (Vicksburg; Porters Chapel) found herself in a bases-loaded jam to start the bottom of the first but did not let that faze her as she promptly struck out the warrior hitter to get out of it without allowing a run.

Nance reached on an error to start the third and Overstreet followed it up with a double. Rethmeyer walked to load the bases with no outs. Nance scored on a passed ball and Cartwright followed that up with a two-run double, increasing the lead to 6-0. Pearson followed the double with an RBI single, but Pearl River was not done there as they pushed across two more on a Nance single as well as York scoring on a wild pitch. The Wildcats carried a 9-0 lead into the bottom of the third.

Embry continued to keep the Warrior lineup off-balance in third, setting them down without allowing a hit.

The home run barrage by the Wildcats continued in the fourth as Lee drilled a three-run shot over the centerfield wall, scoring Cartwright and blowing things open further 12-0.

Bethany Fewell (Mendenhall) extended the lead in the fifth with her first Wildcat homer, pushing across two more to make it 14-0.

Embry came back for the fifth and worked out of a jam to slam the door, winning the game 14-0.

Embry was a force in the circle in game two tossing five scoreless, striking out seven in the process.

Miller and Nance lead the way in game two with two hits each.

Lee led the way with three RBIs. Miller, Fewell, and Cartwright finished tied for second with two RBIs each.

Nance, Rethmeyer, and Pearson all drove in a run.

“In game two, our offense made the adjustment of attacking early and allowed that to turn into confidence,” Meeks said.

UP NEXT
The Wildcats hit the road on Saturday to take on Coahoma. The game is set to get underway at 1 p.m. and will be livestreamed at CoahomaSports.com/watch.