No. 3 Pearl River sweeps slugfest against No. 5 East Central 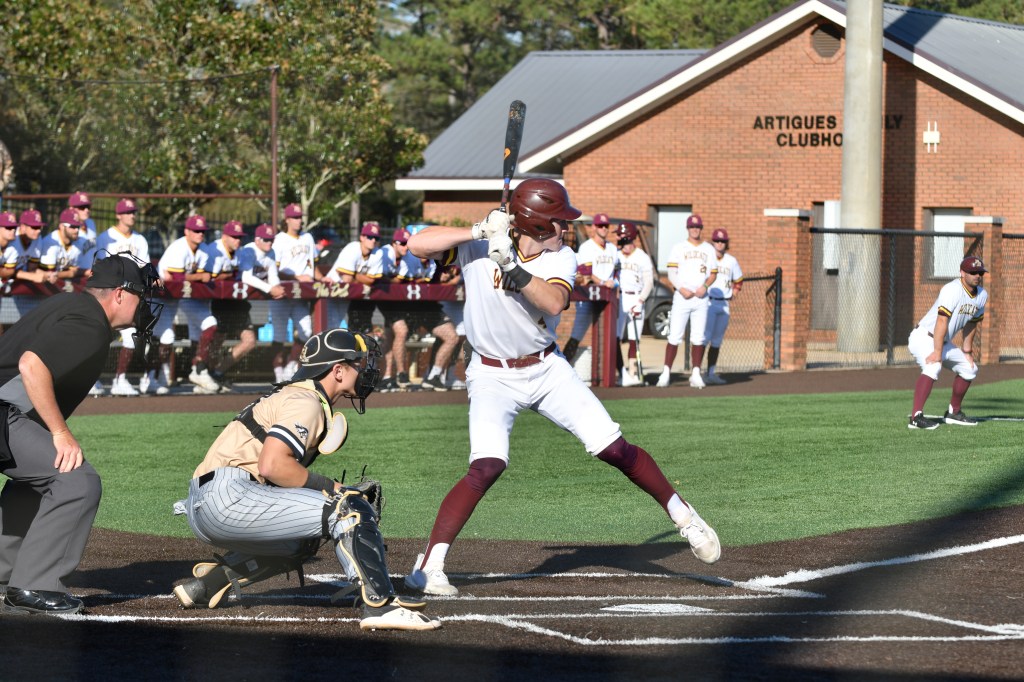 POPLARVILLE, Miss. — Slugfest is the best word to describe No. 3 Pearl River’s doubleheader sweep against No. 5 East Central. On the day, the teams combined for 57 runs and 61 hits through 15 innings. The Wildcats went down 12-2 in the first game before storming back to win 22-17. PRCC then grabbed a run-rule victory in the nightcap, winning 14-4 in six innings.

PRCC’s 36 runs were the second most in a doubleheader under head coach Michael Avalon.

“I’m smiling. I’m pretty proud,” Avalon said. “That was impressive. Credit to them, they swung the heck out of the bat. That’s a tough day at the office and one to be very, very proud of. That’s a quality team. They punched us early, but we punched back and finished the fight.”

Following the sweep, Avalon took time during the post-game interview on PRCCMedia.com to deliver a special message to a young member of the Wildcat Family, Tripp Ladner.

“This is going to be hard to say, but I’m sure these guys are probably listening and watching: Little Tripp Ladner had two brain surgeries this week,” Avalon said to the camera, holding back emotions. “I know there are a lot of people on this campus and in this community who care about that kid. His daddy, Braden, sent me a message this morning and that was the last thing we played for our guys before the game.

“He’s an inspiration. That’s a tough, tough son of a gun. If we can be half as tough as Tripp is, we’re going to be all right. It’s a great day to be a Wildcat. Tripp, we love you. Hang in there, buddy.”

GAME ONE
It was a gloomy start to the day for Pearl River (17-5 overall; 5-1 MACCC) as East Central (17-6; 4-4) came out of the gate on fire, plating eight first-inning runs. The odds of a comeback looked slim, but Wildcats never quit.

Tate Parker (Gulfport; West Harrison) put a little life into the Wildcats in the bottom half of the inning. The reigning MACCC Player of the Year and NJCAA First Team All-American was just late on the first pitch of the at-bat but timed up the second pitch perfectly, crushing a no-doubt homer over the center field wall to make the score 8-1. A few batters later, Ian Montz (Lafayette, La.; Acadiana) made the score 8-2 with a sacrifice fly to straightaway center field.

The Warriors continued to pour it on in the second inning, scoring four runs to make the score 12-2. The first two came around to score on a two-run single and two wild pitches scored the next two.

The bottom of the second inning was an offensive show for the Wildcats as they plated six runs in the frame. D.K. Donaldson (Gulfport; West Harrison) and Taylor Woodcock (Pass Christian; West Harrison) both singled to open the inning. After both players moved into scoring position, Parker was intentionally walked to load the bases. The walk came back to bite the Warriors as Alex Perry (McComb; North Pike) walked on five pitches to make the score 12-3. Matt Mercer then (Richton; Petal) unloaded the bases with a double into the gap, cutting the deficit to six runs at 12-6. Logan Walters (Petal) then sent his former PHS Panther teammate home with an RBI single. Preston Soper (Madison; Germantown) put a cap on the scoring in the inning by pulling a double into right field to make the score 12-8.

ECCC added a pair of runs in the third inning on a ground out and a single to push the lead back out to six runs at 14-8.

The bottom half of the frame saw Parker blast his second homer of the game in almost identical fashion as the one earlier in the game. The homer was his ninth of the season and made the score 14-9 East Central.
Mercer and Montz led off the fourth inning with consecutive singles before Soper brought Mercer home with a single off the centerfield wall. The Wildcats brought another run around two batters later by way of a Woodcock sacrifice fly, cutting the deficit to three runs at 14-11.

Pearl River finally took its first lead of the game in the fifth inning of the night. Tate Parker was hit by a pitch to open the inning and Perry drew a five-pitch walk. After a fielder’s choice and a flyout, Walters hit a ball off the edge of the bat that crept just past the second baseman to drive in the first run. Soper then lined one into right field for an RBI and Donaldson cracked a line drive into left field to give Pearl River the 15-14 lead.

The Warriors hit a no-doubt homer in the seventh inning to tie things up 15-15, but it was all Wildcats from there. The bottom half of the seventh saw Pearl River score five runs, all with two outs. Soper and Donaldson both got on base to begin the inning before Woodcock and Broadus brought them each home with singles. The Warriors had seen enough of Parker, opting to intentionally walk him. The decision came back to bite them as Perry was hit in the shoulder right after. Mercer then dribbled a ball to shortstop but beat it out for an RBI infield single. Montz collected the last RBI of the inning after being hit by a pitch, giving Pearl River a 20-15 advantage.

PRCC plated its last two runs of the game in the eighth as two runners scored on an error to put the Wildcats up seven runs, 22-15.

ECCC scored two runs in the top of the ninth, but the comeback bid was cut short by a good relief outing by Cole Tolbert(Laurel; West Jones) to give PRCC a 22-17 victory.

Ryan Burt (Columbus; New Hope) was the highlight of the day on the mound of the Wildcats. The left-hander tossed three innings, allowing just two hits and one earned run. He also struck out two batters. Turner Swistak (Hattiesburg; Oak Grove) pitched three solid innings, allowing seven hits and three earned runs. He struck out a trio of batters as well. Tolbert pitched a great ninth inning, giving up just one hit while striking out two batters.

Mercer led the way in game one, going 4-for-6 at the plate with four RBIs and a double. Soper also had a four-hit game, collected three RBIs, three runs scored and a walk. He also stole two bases.

GAME TWO
The Warriors once again got into the run column first, bringing home a runner with a passed ball.

Gabe Broadus (Wilmer, Ala.; Faith Academy) got the Wildcats started off with a bang, blasting the third pitch of his at-bat over straightaway centerfield for his first home run in the maroon-and-gold. That sparked the PRCC offense as Parker singled and Perry and Mercer walked to load the bases. Montz then stepped into the batter’s box and unloaded the bases with a monster home run over the centerfield wall, giving the Wildcats a 5-1 advantage. Soper got on base soon after and advanced to third on an error by the Warrior pitcher. Donaldson then flew out to centerfield, allowing Soper to tag and score to extend the lead, 6-1.

East Central sliced the lead to just two runs at 6-4 in the second inning off three singles.

The Wildcats took a 7-4 advantage in the bottom half as Montz tallied his fifth RBI of the game with a groundout.

Both teams went quiet in the third inning, but PRCC exploded once again in the fourth. Broadus and Parker opened the inning with singles and Perry followed it up with a walk. Mercer then demolished the second grand slam of the game for the Wildcats, his second homer of the year. Not long after, Woodcock drove in another run to make the score 12-4.

Pearl River scored another run in the fifth off a Woodcock single and Donaldson gave the Wildcats a 14-4 run-rule victory in the sixth inning.

Broadus and Montz tied for the team lead in hits with three each. Montz led the team with five RBIs. Mercer wasn’t far behind, tallying four.

UP NEXT
PRCC’s homestand continues into Saturday as Coahoma comes to Dub Herring Park for a 2 p.m. first pitch.