No. 3 Pearl River allows one run in sweep of No. 16 Jones College 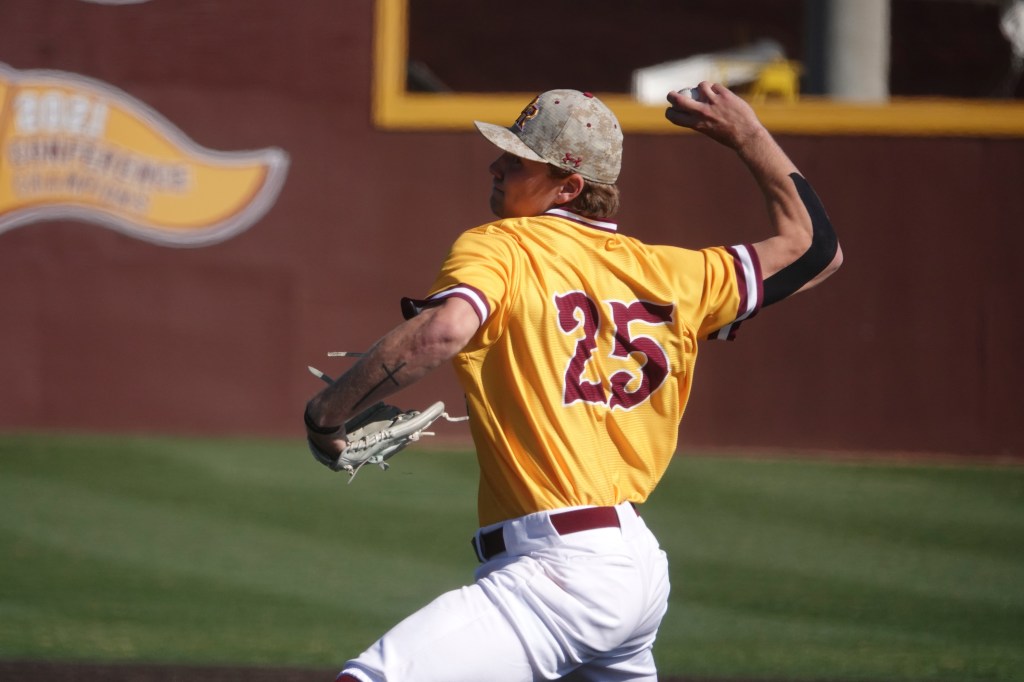 ELLISVILLE, Miss. — Pitching was the story of Pearl River’s “Cat Fight” against rival Jones College Wednesday. The Wildcats used two incredible performances from sophomores Dakota Lee (Purvis) and Leif Moore (Biloxi; St. Martin) to sweep the Bobcats, winning 8-0 in game one and 2-1 in the nightcap.

With the two wins, Pearl River has now taken six consecutive games against the Bobcats.

“I know this is the first time in six years that we have come over here and got a sweep,” head coach Michael Avalon said. “This is not an easy place to do it. This is a quality program and they’re a good team. Our pitching was outstanding. We had some big hits but we left some runners on in both games. We have to get better there. We know that and we’re going to keep working on it. It was a great day and I am very proud of them. This is two big wins for our program and school and we’re thankful for them.”

GAME ONE
Lee earned the start in the opener and turned in one of the best performances of his career, silencing the Jones College (14-6 overall; 1-3 MACCC) bats over seven innings.

The first inning of the day saw both Pearl River (14-4; 3-1) and Jones College go quietly.

The Wildcats put a number into the run column in the second inning of play. With one out, Logan Walters (Petal) stepped into the batter’s box and knocked the fourth pitch of his at-bat over the left field wall to give PRCC a 1-0 advantage.

“I was looking for a good pitch to hit,” Walters said. “I took two balls and got into a good count. I got a good pitch to hit and got a good swing on it. Luckily, it went out and got us off to a good start. We just built on that from there. It was a good team win today. We played Wildcat baseball and I am really proud of our guys today.”

The Bobcats looked to even things up in the bottom half of the inning, getting a leadoff single, but Lee made sure that the single didn’t come back to hurt them as he quickly struck out a batter and forced two groundouts.

PRCC was able to stretch its lead out to 3-0 in the top of the fourth inning. Blake Hooks (Petal) got into scoring position with a double hit into right field. Taylor Woodcock (Pass Christian; West Harrison) then singled to move him around to third base. A groundout off the bat of Gabe Broadus (Wilmer, Ala.; Faith Academy) brought Hooks home and an error by the Jones College shortstop scored Woodcock right afterward.

Neither team was able to get anything going until the seventh inning when Pearl River added some insurance runs. Alex Perry (McComb; North Pike) opened the inning with a double into left field. A five-pitch at-bat ended in an RBI single for Matt Mercer (Richton; Petal). Walters followed it up with a single and promptly stole second base to get two runners into scoring position for D.K. Donaldson (Gulfport; West Harrison). Donaldson lined the 1-0 pitch over the shortstop and into left center field to score both runners and make the score 6-0. The Wildcats weren’t done there as Preston Soper (Madison; Germantown) brought home Donaldson with a single to put Pearl River on top 7-0.

Tate Parker (Gulfport; West Harrison) hit his seventh homer of the year in the eighth inning, but it wouldn’t have gotten over without the help of the Jones College left fielder. As the ball sailed towards the wall, he jumped to catch the ball but instead knocked it over the wall for a solo homer, making the score 8-0.

Bobby Magee (Petal) entered the game in the bottom of the eighth inning. Jones College led off the inning with a single, but Magee struck a batter out and induced two ground balls to preserve the 8-0 run-rule victory.

Lee threw seven incredible shutout innings, striking out four against just four hits. He did not walk a batter.

“I felt like I had every pitch that I have working all day,” Lee said. “I was able to throw them where I wanted to all day.”

Magee pitched an inning and allowed one hit while striking out a batter.

Broadus, Parker, Walters and Donaldson each had two hits.

GAME TWO
Moore turned in an equally dominant performance in the nightcap, pitching a complete game for the Wildcats on just 83 pitches. He struck out five batters and allowed just three hits, one walk and one run.

“I felt good on the mound,” Moore said. “My velocity felt good and my arm was loose. My fastball was electric. I didn’t feel great about my slider, but my changeup and curveball felt good.”

The scoring was started by Walters once again as the outfielder doubled home a run in the top of the fourth to put Pearl River on top 1-0.

PRCC tacked on another run in the fifth inning that proved to be very important. Ian Montz (Lafayette, La.; Acadiana) led off the inning with a single and Woodcock drew a walk soon after. A Bobcat wild pitch then moved the pair up another base to set up a Parker sacrifice fly to make the score 2-0.

Jones College was able to break up the shutout bid in the bottom of the seven with a solo homer, but Moore battled back to slam the door and claim a 2-1 victory for Pearl River.

Parker, Mercer, Soper, Walters and Montz each had a hit in the contest.

UP NEXT
The Wildcats hit the road Friday for games against LSU Eunice and Baton Rouge. First pitch is set for 3 p.m. The games will be livestreamed at TSRNSports.com.