No. 16 Pearl River pummels Delgado in round one of Region XXIII tournament 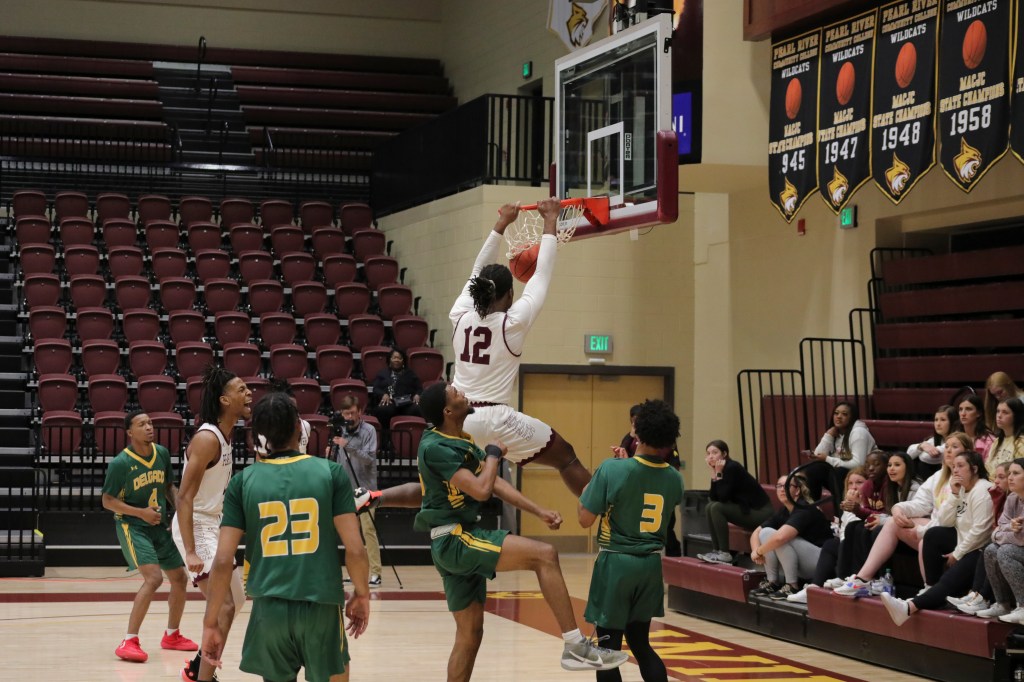 POPLARVILLE, Miss. — The No. 16 Pearl River men’s basketball team bounced back from the MACCC semifinal loss in a big way Monday night inside Marvin R. White Coliseum. The Wildcats pummeled Delgado 93-57 in the opening round of the Region XXIII tournament to advance to the quarterfinals.

“When I found out this was our draw, I knew we had to go to work,” head coach Chris Oney said. “I’ve been uptight the last couple of days. I knew that they weren’t going to be afraid of us because they beat us one time and should’ve won the second time. Since then, we’ve gotten better. I knew we wouldn’t shoot as badly as we did the last game. We were fresh and got some guys back healthy. I think the game went the way I expected it to.”

FIRST HALF
Delgado (9-16 overall) got on the board first, getting a wide-open layup. Ankerion Gross (Sardis; North Panola) was then left open on the wing and promptly knocked down a 3-pointer to give Pearl River (21-3) a 3-2 lead.

DCC briefly retook the lead, but a 3-pointer from the opposite corner for Cameron Brown (Hattiesburg) made the score 6-4. The Dolphins tied things up 6-6, but Earl Smith, Jr (Jackson; Lanier) knocked down his first 3-pointer of the day to make the score 9-6.

The Wildcats found themselves with a 10-8 lead a few minutes later then Dylan Brumfield (Hattiesburg; Oak Grove) pulled down a defensive rebound and heaved the ball down the court to Gross for a layup and 12-8 advantage.

Pearl River took a 14-10 lead seconds later as Carlous Williams (Hattiesburg; West Harrison) backed into the lane and then floated a hook shot off the backboard and into the net.

The Wildcats went ahead 21-15 later in the quarter as Williams knocked down a jumper from the free-throw line.

With 9:08 left in the half, Jariyon Wilkens (Biloxi) caught a pass in the corner. The guard drove inside before pulling up and nailing a 10-foot jumper that made the score 25-17.

Jaronn Wilkens (Biloxi) got the Pearl River crowd on its feet a few plays later, throwing down a one-hand slam. Williams followed that up by getting a layup to fall through contact and making the subsequent and-one shot.

Immediately after, Jariyon Wilkens blocked a shot on the defensive end and then got down the court and threw up a lob to his brother Jaronn Wilkens for a layup.

PRCC closed out the half with a buzzer-beater floater from Jaronn Wilkens, giving the Wildcats a 45-23 lead at the break.

SECOND HALF
Jaronn Wilkens got a layup to fall to start the half, but a string of points by Delgado made the score 47-27. Brumfield then took a pass from Smith, drove inside and lobbed the ball up to Jaronn Wilkens who slammed it home.

Brumfield then knocked down a jumper from the free-throw line to make the score 51-27.

The Wildcats then took a 57-29 lead as Williams got an offensive rebound, slammed it home and made his and-one free throw attempt.

PRCC continued to pour it on eventually going up 70-36 after a Brison Waller (Cleveland, Ohio.; Garfield Heights) alley-oop. Waller one-upped his previous alley-oop moments later as Jariyon Wilkens lobbed a ball up and Waller threw down a vicious two-hand slam.

The Wildcats took a 39-point lead late in the half after Preston Turner (Laurel; West Jones) got an offensive rebound and put it back up to make the score 80-41.

STATISTICALLY SPEAKING
Williams tied his season-high in points with 21. He also scored 21 points in the first matchup against the Dolphins. He tallied four rebounds and three assists as well.

“We walked out with our heads down last week and Carlous felt a lot of the responsibility for that. I told him that this is when you find out what kind of dude you are. He went out and proved that he can make those plays.”

NEXT UP
Pearl River returns to action tomorrow as Northwest makes the trip to Marvin R. White Coliseum. The game is set to get underway at 7:30 p.m.