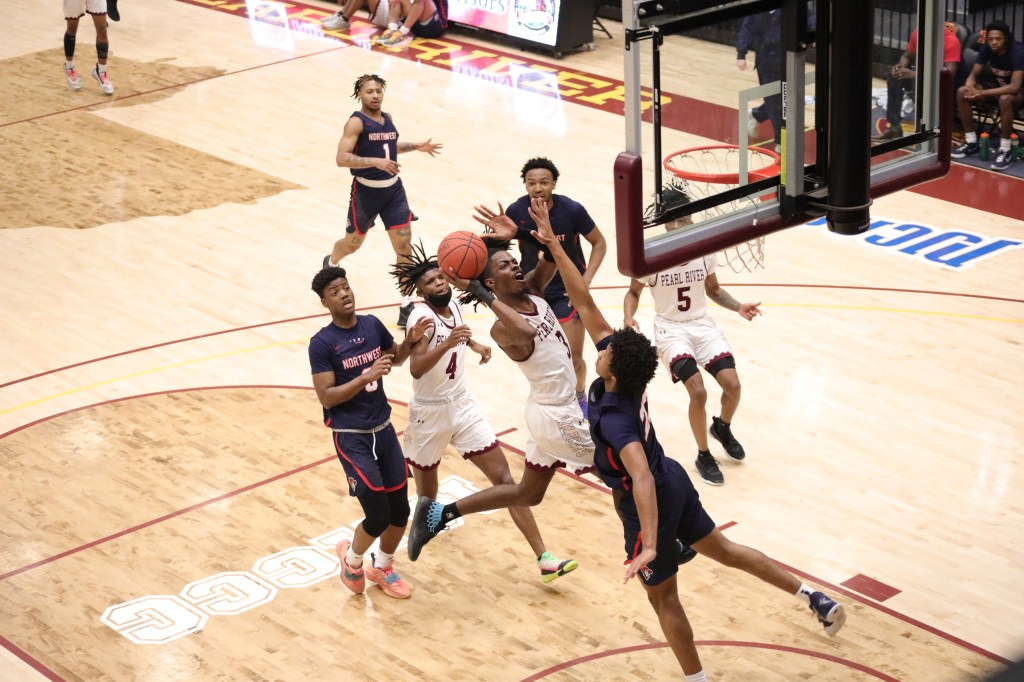 POPLARVILLE, Miss. — Few things are certain in the world, but one thing that feels certain is the Pearl River men’s basketball team competing in the Region XXIII semifinals. The 16th-ranked Wildcats made quick work of Northwest Tuesday night inside of Marvin R. White Coliseum, smacking the Rangers 63-44.

The win sends the Wildcats to their fifth consecutive Region XXIII semifinal game where they will take on LSU Eunice. The Bengals knocked off East Mississippi 76-73 to set up the matchup.

“They were working us to get down the court, but we were trying to limit their possessions by going deep into our shot clock which helped us out,” head coach Chris Oney said. “I felt good about where we were but I knew if we were able to get a stop I could run time. Thankfully, we were able to get some stops and run out the clock to advance.

Oney is already looking ahead to his matchup with LSU Eunice.

“Eunice does a good job. We’re going to have to be ready to play but so will they,” he said. “It’s the playoffs. We will be able to get some rest and figure out what we need to do. It’s win or go home time now and we hope we get a chance to play in Hutchinson, Kansas.”

FIRST HALF
For the second night in the row, Ankerion Gross (Sardis; North Panola) opened the Pearl River (22-3 overall) scoring by knocking down a 3-pointer. Northwest (18-8) tied it back up with a 3-pointer of its own.

Jaronn Wilkens (Biloxi) was able to fight his way to the basket for a layup shortly after and Cameron Brown (Hattiesburg) nailed a 3-pointer from the wing to make the score 8-3.

Brown knocked down his second 3-pointer of the night moments later. The ball found him just one step in front of the logo as the shot clock ticked down to one second. The guard pulled up from the spot and hit nothing but net to make the lead 13-8.

The Wildcats eventually built out a 27-12 lead after two baskets from Dylan Brumfield (Hattiesburg; Oak Grove) and a corner 3-pointer for Earl Smith, Jr (Jackson; Lanier).

PRCC continued to knock down the 3-pointer as J.D. Allen (Brookhaven; Wesson) got his first of the night to fall, making the score 30-16.

Another 3-point basket from Brown and a Wildcat free throw sent Pearl River into the break with a 37-24 lead.

SECOND HALF
NWCC opened the half with two straight baskets to cut the deficit to nine points at 37-28, but Jaronn Wilkens tipped in a missed 3-point shot to push the lead back out to 11 at 39-28.

A 6-0 run from the Rangers sliced the Pearl River lead to 41-35 midway through the half. The run was finally broken up after Allen leaped high above the rim to tip a missed shot off the backboard and into the net.

The score stood at 47-39 not long after, but a big 11-1 run helped the Wildcats build a 61-43 lead. The run began with Jariyon Wilkens knocking down a corner 3-pointer. On the next possession, Allen got a circus shot to go in. As he was falling down, he threw up his arm to tip the ball up in the air and into the basket. Jaronn Wilkens got the ball on an inbound pass and threw down a one-hand slam. The run ended with an Allen 3-pointer.

The Wildcats capped the scoring with just over a minute left on the clock as Jaronn Wilkens bounced a pass to his brother Jariyon for a two-handed slam, giving Pearl River a 63-44.

BY THE NUMBERS
Jaronn Wilkens had his second consecutive 15-point night. Jariyon Wilkens and Allen finished with 12 points each. Brown was the last Wildcat in double figures, scoring 11 points.

The Wilkens twins and Brumfield each had four assists.

NEXT UP
Pearl River’s game against LSU Eunice will be hosted at A.E. Wood Coliseum on the campus of Mississippi College. The game will be livestreamed at PRCCMedia.com/Gold and can be heard at WRJWRadio.com. Tipoff time is still to be decided.