No. 13 PRCC’s Brinson Anne Rogers strikes out 19 in split 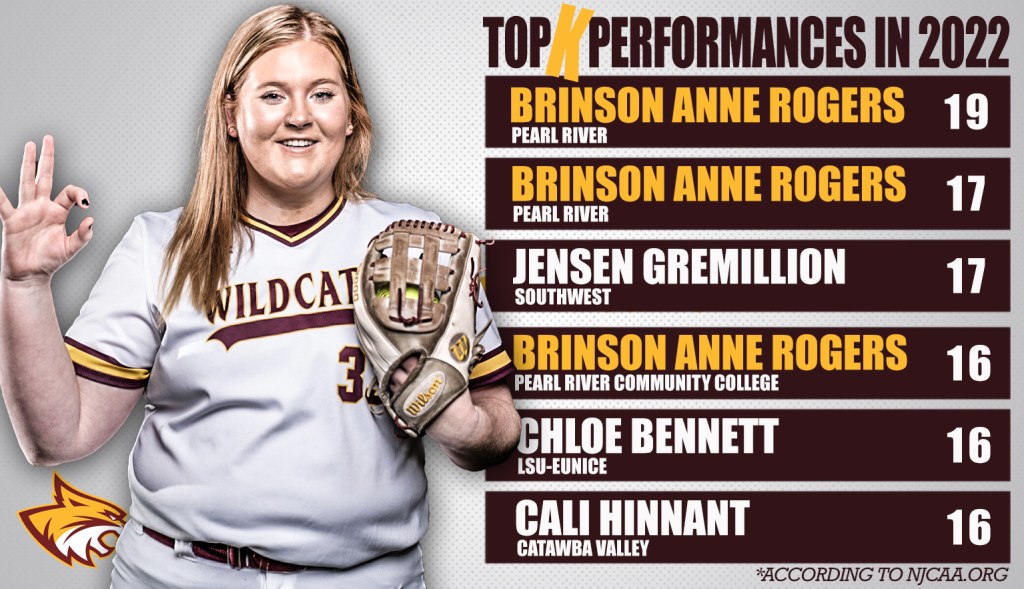 POPLARVILLE, Miss. — Brinson Anne Rogers (Statesboro, Ga.) did it again. The right-handed ace served up a 19-strikeout performance Thursday to lead No. 13 Pearl River past No. 15 Pensacola State College 8-1 in Game 1 of the doubleheader inside Wildcat Stadium. PRCC didn’t have the same success in Game 2, falling to the Division I foe 6-1.
Not only did Rogers top her previous season high by two strikeouts in the opening game Thursday, but the Wildcats also snapped the visiting Pirates’ seven-game winning streak.
“I thought in the first game we finally put pitching and hitting together. I thought towards the end we really started to hit the ball well,” PRCC coach Christie Meeks said. “Brinson had a great game on the mound. She’s continuously getting better and better and the team is playing better behind her.”

GAME 1
PRCC fielders didn’t have much to do in Thursday’s opener.
Outside of a solo homer in the fourth inning that broke up Rogers’ no-hit bid, the only other balls that were put into play resulted in a fly out to right in the sixth and a pop out in the seventh.
“I’m so proud of her. The biggest thing we have worked on with her is confidence,” Meeks said. “Every time she steps in the circle she gains more, more and more. She’s getting her swag back.”
Rogers struck out the game’s first three batters and really had her way with the Pirates, issuing only two walks.
“Once the hitters get used to something, Brinson turns around and throws them something different,” Meeks said. “She’s fun to work with.”
Rogers’ 17th strikeout, which tied her previous season high, was a big one in the sixth inning as it erased two base runners with PRCC holding a two-run advantage.
Rogers’ 104 strikeouts on the season put her second in the country, one off the national lead.
Although the right-hander was the obvious headliner in the opener, other Wildcats contributed in big ways.
PRCC broke the deadlock in the third when Emily Rigney (Waynesboro; Wayne County) scored on a hard-hit ball from Taelor York (Choctaw; Clinton Christian Academy). York later scored on an error off the bat of Makiya Hunter (Jackson; Clinton Christian Academy).
A Keigan Pearson (Carriere; Pearl River Central) single scored York in the fifth to push PRCC ahead 3-1.
Clinging to a two-run advantage the Wildcats found some breathing room courtesy of a five-run sixth. After Dallyn Nance (Nanih Waiya) and Cassidy Cartwright opened the frame with a single and double respectively, Payton Lee (Picayune; Pearl River Central) cleared the bases with a triple. Lee later came around to score on a York groundout. Following a Pearson double that scored Hannah Miller (Kokomo; West Marion), Julianah Overstreet (Vancleave) drove in the frame’s final run with a single.
“I thought in that inning we were way more comfortable running the bases,” Meeks said. “They ran with their view rather than just ours. That’s something we’ve been pushing hard — we have to run the bases well if we’re going to score.
Cartwright finished the game a perfect 3-for-3. Lee, Overstreet, Pearson and York all recorded two hits.
GAME 2
The Wildcats saw some nifty fielding early in Game 2. During the second inning, Miller came up with a chopper up the middle, flipped to York and the shortstop zipped a throw to Pearson for a smooth double play.
PSC opened the scoring with a four-run third inning and tacked on additional runs in the fourth and sixth.
PRCC finally broke through in the seventh to avoid the shutout.
Jena Pacheco (Vancleave) opened the frame with a walk. Pinch runner Madi Waters (Laurel; West Jones) stole second and later came around to score on a single by Hannah Embry (Vicksburg; Porters Chapel Academy).
“We have to finish the day,” Meeks said. “That’s something we’ve been practicing and working on. Don’t wait until the last inning of the second game to get going; we have to start that sooner.”
Miller led all Wildcats with two hits, including a double. Aunie Rethmeyer (Belle Chase, La.) walked twice.

NEXT UP
PRCC will embark on a four-game road trip beginning Tuesday when the Wildcats will visit Baton Rouge for a 1 p.m. doubleheader. PRCC then opens MACCC action Saturday, March 12 with a 1 p.m. doubleheader at Northwest. The Wildcats return home Tuesday, March 12 for a 4 p.m. “Cat Fight” against Jones College.
For the latest on Pearl River Community College athletics, follow us on Twitter (@PRCCAthletics) and Facebook (PRCCAthletics).