No. 12 Pearl River no-hits No. 3 Jones College in split 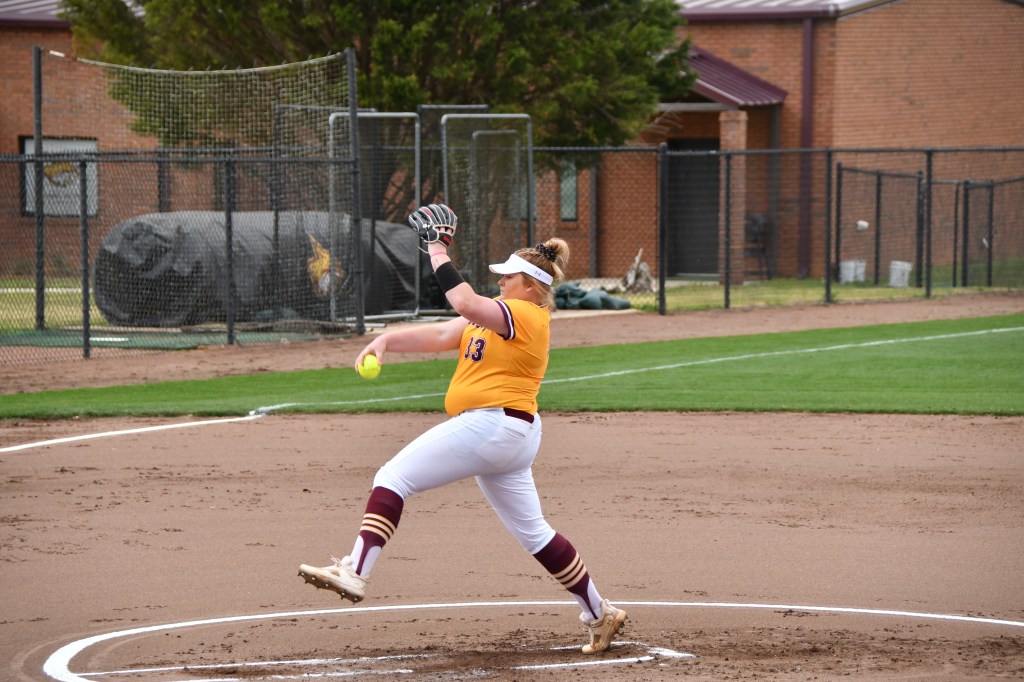 POPLARVILLE, Miss. — Wednesday’s “Cat Fight” on the diamond saw two very different results at Wildcat Stadium. Brinson Anne Rogers (Statesboro, Ga.) took the circle in the opener and was dominant, leading No. 12 Pearl River to a 1-0 victory over No. 3 Jones College while tossing a no-hitter. The Wildcats weren’t as fortunate in Game 2, however, falling 10-4.

The Wildcats (12-9 overall; 2-2 MACCC) avoided a disastrous start in the first as Brinson Anne Rogers (Statesboro, Ga.) loaded the bases on a pair of walks and hit batter. After a short visit from Meeks, Rogers responded by striking out consecutive Bobcats (15-6; 3-1) to keep a zero on the scoreboard.

Rogers continued to keep Bobcat batters off balance in the second inning, striking out the side.

The pitchers duel extended into the fifth inning when the Wildcats finally broke the scoreless tie. Payton Lee (Picayune; Pearl River Central) got ahold of a pitch from the JC starter and sent it over the right field wall for a solo homer.

“Payton has been fighting really hard,” Meeks said. “At practice we talked about when you get two strikes on you, continue to battle until you see the pitch that you want. That’s what she’s done.

“We’re extremely proud of her for barreling up a ball and sending it out of here. That was huge.”

The Bobcats put a charge in one with two outs in the sixth inning but Lee back tracked fighting the swirling wind and caught the hard hit ball to keep PRCC ahead 1-0.

Pearl River clung to the narrow lead going into the final inning. After striking out the leadoff batter, Rogers walked the next two Bobcats. The next Jones College batter sent a line drive to left-center but Cassidy Cartwright (Poplarville) raced it down and then hit Hannah Miller (Kokomo; West Marion) with a perfect throw to double up the lead runner at second base.

“That was phenomenal,” Meeks said. “(Cartwright) takes a hit away in the gap and then turns around and gets a fantastic throw into second base.

“That was a heads up play by Hannah, too, being at second and knowing where the play was.”

Rogers was effectively wild in the contest, walking six without allowing a hit. Her 14 strikeouts were her fourth-most of the season, behind a 19-strikeout performance against Pensacola State College, 17 against Walters State and 16 against Lamar State-Port Arthur.

With the victory, Rogers improved to 7-2 on the season.

““That was just Brinson being Brinson,” Meeks said. “To shutout somebody is a big deal. To shutout a team ranked higher is a bigger deal and then to no-hit a team like that is an amazing accomplishment.

“Brinson’s mentality is so phenomenal. She’s present in every situation.”

The Bobcats didn’t waste any time in Game 2, manufacturing a 2-0 lead thanks to heads up baserunning.

Pearl River cut JC’s lead in half in the bottom of the second inning. Aunie Rethmeyer (Belle Chasse, La.) doubled to lead off the frame and made her way to third on a wild pitch. With two outs, Cartwright laced a single through the left side to score the PRCC catcher and bring PRCC within one, 2-1.

Jones College responded in the third inning via a three-run homer to center field, pushing its lead out to 5-1.

Nance got PRCC back into the game in the bottom half of the third courtesy of a double laced over the left fielder. The double plated Taelor York (Choctaw; Clinton Christian Academy) and Miller.

The Bobcats reclaimed the four-run lead at 7-3 in the fifth and then tacked on a run in the sixth.

PRCC scored its final run in the sixth. After Makiya Hunter (Jackson; Clinton Christian Academy) opened the frame with a double and took third on a wild pitch, the third baseman scored on a Cartwright fly out.

JC closed out the scoring with two more runs in the seventh.

The Wildcats collected eight hits as a team, with Miller recording two. Nance and Cartwright each drove in two runs.

“In Game 2 we hit a lot better but we didn’t play defense,” Meeks said, alluding to PRCC’s four errors in the contest. “I really believe Hannah came out on fire and then we made a couple of errors. It’s hard to pitch when that happens.

“We’re going to continue to get better at that.”

UP NEXT
PRCC will hit the road for a six-game road trip. PRCC visits Coastal Alabama-North on Sunday and then treks to East Central on Wednesday, March 23. After playing Coahoma on the road on Saturday, March 26, PRCC finally returns home Tuesday, March 29 for a rivalry matchup against Gulf Coast.