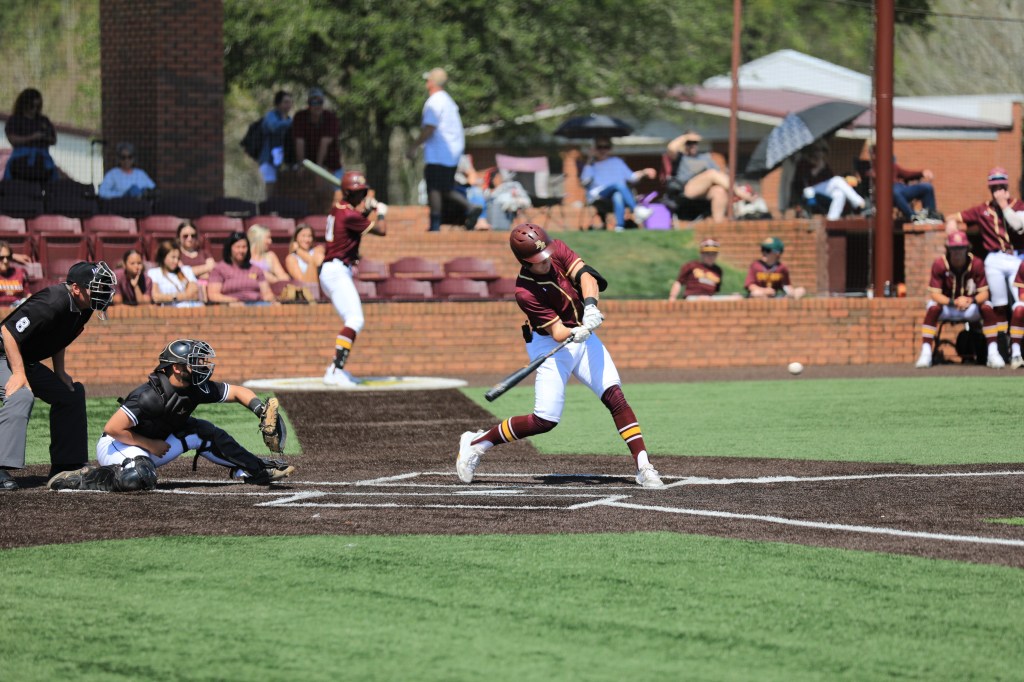 PERKINSTON, Miss. — The No. 1 Pearl River baseball team could have hung its head after falling in the first game of the day 9-7 but instead dominated the second game of the day 9-2 to split with archrival Gulf Coast.

“I think a lot of the character of the team is coming out now,” head coach Michael Avalon said. “That’s a heck of a job to get beat game one on the road and turn around and dominate the second game. I’m proud of that.

“When I met with them, you didn’t get the feeling that they were satisfied with that. They knew that wasn’t what we came here to do. This is a tough league and we’re glad we got out of here with a win.”

GAME ONE
Gulf Coast (10-15 overall; 5-5 MACCC) grabbed the lead first in the game, plating three runs on four singles to make the score 3-0.

The Pearl River (20-6; 8-2 MACCC) offense finally woke up in the fourth inning, battling back to snatch the lead 4-3. Alex Perry (McComb; North Pike) led off the inning with a single and Matt Mercer (Richton; Petal) followed it up with a walk. Ian Montz (Lafayette, La.; Acadiana) then stepped to the plate and drove a ball right back where it came from to bring in a run. Two outs later, D.K. Donaldson (Gulfport; West Harrison) walked to load the bases an error off the bat of Taylor Woodcock (Pass Christian; West Harrison) and a two-run double from Gabe Broadus (Wilmer, Ala.; Faith Academy) rounded out the scoring in the inning.

The Bulldogs retook the lead in the bottom of the fifth, using two errors and a two-run homer to go ahead 8-4.

With two runners on in the top of the sixth, Broadus crushed a 1-0 pitch over the head of the Bulldog center fielder to cut the deficit to 8-6.

A sacrifice fly brought in an insurance run for the Bulldogs in the bottom of the sixth to make the score 9-6. A half-inning later, Pearl River got that run back with a ground ball off the bat of Logan Walters (Petal), cutting the deficit to two at 9-7.

PRCC got the first two runners on base to open the ninth inning but was unable to stretch across any runs, falling 9-7.

GAME TWO
The Bulldogs once again jumped on the Wildcats at the beginning of the game knocking a two-run homer over the left field wall to take a 2-0 lead.

Mercer made up for his 0-for-3 game in game one by hitting a missile home run over the left field wall, cutting the deficit to 2-1.

Hooks opened the third frame with a six-pitch walk and Broadus followed it up by lining a ball past the MGCCC third baseman. Good baserunning from Hooks allowed him to advance all the way around to third. Tate Parker (Gulfport; West Harrison) then stepped to the plate and drove a ball to the warning track in left field for a sacrifice fly. After a hard-fought at-bat, Perry was able to get a ball through the right side of the infield for a single. Mercer then stepped up to the plate and smacked his second homer of the day, this time an opposite-field two-run homer that made the score 5-2 Wildcats.

Preston Soper (Madison; Germantown) delivered a pinch-hit RBI double in the fifth inning to give the Wildcats a 6-2 lead.

After a few quiet innings, Donaldson put the game out of reach in the seventh inning. Montz doubled and Walters was hit by a pitch before Donaldson unloaded on a ball for a three-run homer.

The 9-2 lead was plenty for the Wildcats as they held on to split the series with the Bulldogs.

“Leif went out in the first inning and gave up a two-run home run on a mistake,” Avalon said. “He could’ve hung his head, but he didn’t. It was a great outing once he settled in. That’s the Leif that we all love and that’s the Leif that we need. Obviously, he’s not going to be perfect every time out.”

Cole Tolbert (Laurel; West Jones) came out of the bullpen and was lights out, allowing just one baserunner in two innings of work. He struck out four in his appearance.

Mercer led the way offensively in game two, going 2-for-4 with two homers and three RBIs.

“I wasn’t trying to do too much,” Mercer said. “I got a few pitches to hit. I was trying to see something up and not chase anything down.”

Soper was the only other Wildcat with multiple hits in the game.

UP NEXT
The Wildcats return to Dub Herring Park Saturday as East Mississippi makes the trip for a 2 p.m. doubleheader. The Lions currently have a one-game lead on the Wildcats for first in the MACCC.