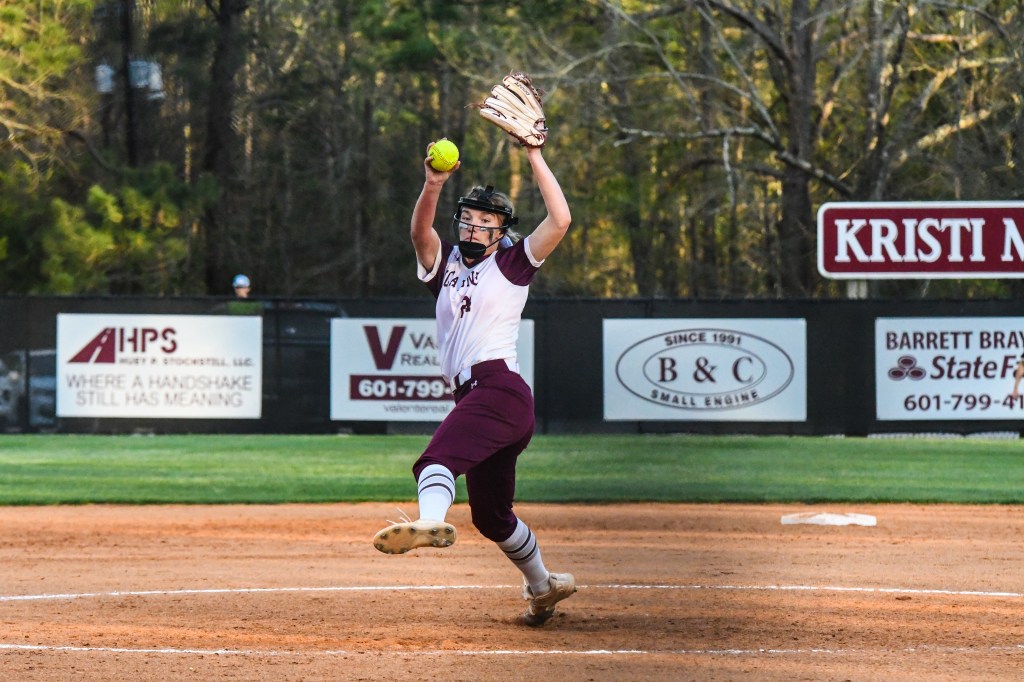 Senior pitcher Kylie Burnette and the Picayune Lady Maroon Tide’s defense was an absolute wall Thursday night, allowing no hits, no walks and no errors to cap of Burnette’s first perfect game on the season.
Thursday night’s match against the Long Beach Bearcats ended in a 5-0 Lady Tide win. The win meas the team is undefeated in district so far (2-0). On the season, the team has a record of 12-5.
“To be honest I think that’s one of the best games we have played, the defense was lights out,” said Picayune Head Softball Coach Courtney Dickens.
“We adjusted to the Bearcats’ pitching, I thought tonight was really well. We got some hard hits… some times when they throw different pitchers in there it might throw you off but I was proud of the way we stayed in the box and got some good hard hits against both pitchers,” she said.
At the bottom of the third inning is when the Lady Maroon Tide produced the game’s first runs. Kaigyn Kulas connected on a pitch for a single RBI.
Then, with bases loaded and Addison Tagged at bat, she connected for a left field hit for a two run RBI and a 3-0 Lady Maroon Tide lead.
At the top of the fifth, the Lady Tide made three consecutive big plays. Kylie Burnette struck out a Bearcat hitter, Katie Hedgepeoth caught a deep fly ball and Brooklyn Wilson made a quick scoop and throw play to first base to give the Bearcats a third out.
At the bottom of the fifth with two outs, a Bearcats error allowed Brooklyn McCormick to double home for a 4-0 Lady Maroon Tide lead.
At the bottom of the sixth, the lead grew to 5-0 after Barcley Martinez’s single RBI.
The strong defense by Picayune continued through the remaining innings, giving the team a 5-0 win.
Thursday night was Burnette’s first perfect game.
“She threw very well, and we played really good defense behind her,” said Dickens.
“I didn’t think about it, I knew in the first three innings we were getting three up and three down but I don’t like to say I’m getting a no hitter,” Burnette said. “A couple of the girls kept saying ‘Kylie you’re throwing a no-hitter,’ but I just kept going out there and throwing the pitches I knew how to throw.”
She described her performance as better than just winning the game because she accomplished something on her own. Burnette added that the accomplishment a perfect game was also due to the strong performances of her outfield teammates, who made clutch plays.
“Of course my defense did great, Kaigyn Kulas made some great plays in the in-field, my outfielders did their job. It’s like everybody came to play tonight, and we came together as one body,” said Burnette.
Next, the Lady Maroon Tide looks to keep rolling as they host the Pearl River Central Lady Blue Devils on Tuesday, March 29 at 6:30 p.m.