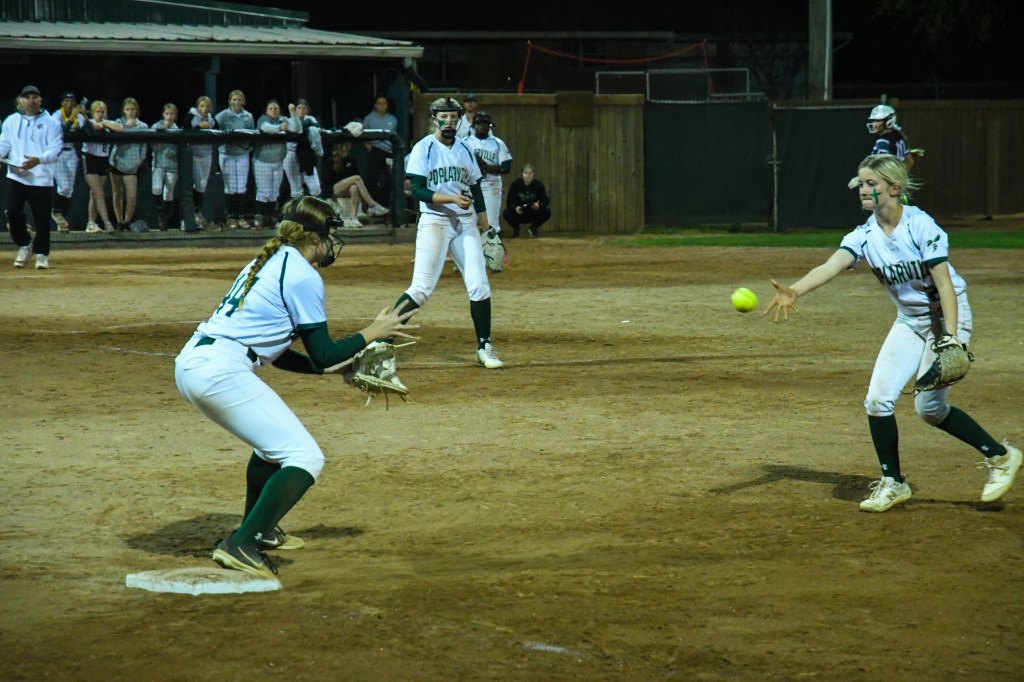 Shailey Peterson tosses the ball to Bailey Davis at first base to put an Aggies runner out during the Lady Hornets' 8-5 win Thursday night.

The Poplarville Lady Hornets moved to 4-8 on the season through a big 8-0 early start and clutch defense against the Forrest County Agricultural Aggies.

The Lady Hornets got on the board early in the bottom of the first inning, leading 1-0 after Kaitlynn Schanewitz’s single. But it was during the second inning that the Lady Hornets heated up.

With bases loaded, Shailey Peterson connected for a great hit between the Aggies middle field for a three run RBI. Leading 4-0, Peterson doubled home to increase the lead to 5-0. The Lady Hornets found themselves with another bases loaded situation, with Lily Tynes at bat. The Lady Hornets went on to score all three runners, giving Tynes a three run RBI. This put the Hornets up by 8-0.

The top of the fifth inning is when the Aggies began collecting runs. Forrest County cut the Lady Hornets’ lead to 8-3 with several RBIs. Over the remaining two innings, the Hornets couldn’t produce any runs, so their defense stepped up to keep the Aggies at bay. The Aggies failed to pull out a comeback, only scoring one run in the sixth and seventh innings, thanks to solid pitching and defense from Tynes and company.

Next, the Hornets will attend the D’Iberville tournament at D’Iberville High School. there, Poplarville will play the Petal Panthers at 9 a.m.