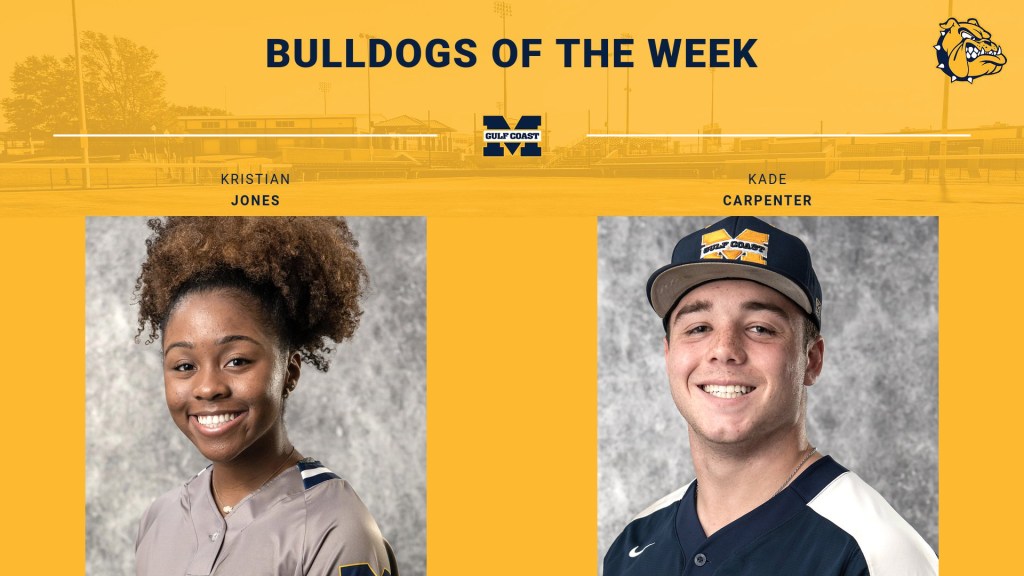 PERKINSTON — Kristian Jones and Kade Carpenter have been named Bulldogs of the Week for March 1-6.

Jones, a sophomore third baseman from Southaven, went 4-for-8 with two doubles during two games against No. 15 Pensacola State. She scored five times.

Carpenter, a freshman outfielder from Vancleave, batted .556 with two doubles and scored five times in a 2-2 week for Gulf Coast. He went 3-for-3 with a double and also reached base with a walk and being hit by pitches three times in a split against No. 11 Lansing. Carpenter also doubled and was 2-for-6 in a split at Baton Rouge.

Ashleigh Chelette, a sophomore from Vancleave, went 4-0 for the women’s tennis team last week. The No. 21 Bulldogs won both MACCC matches last week, including reversing an early-season loss to No. 18 Hinds. Chelette won both her No. 3 doubles matches with Bayley Askin and both her No. 5 singles matches.

TK Catchings, a sophomore forward from New Hebron, registered a double-double off the bench in the Bulldogs’ 68-56 loss at Copiah-Lincoln in the Region 23 Tournament second round. She finished with 13 points and 15 rebounds.

Luke Reed, a sophomore right-hander from Louisville, Ky., threw a complete-game six-hitter to win 9-3 at Baton Rouge. He struck out seven and allowed only two earned runs.