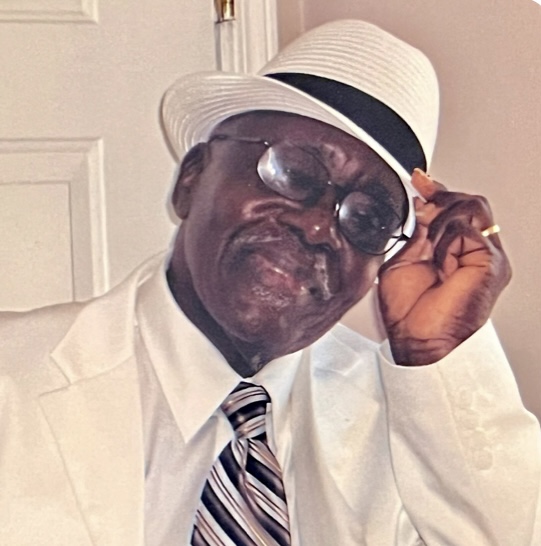 “Our Loss is Great, But God is Greater”.
Mr. Jesse (Jessie) James Johnson, Sr., born on February 23, 1927, was the second born child of the late Ellis Johnson Sr. and Clara Holloway Johnson in Franklin, MS.
In July 1945, during the height of World War II, he was drafted into the United States Army Corps and was honorably discharged in January 1947.
On February 19, 1951, Jesse married Pearlie Beatrice Lee and moved to Picayune, MS. There, he began his career as a welder and a refrigeration mechanic at Stewart DuraVan and Lossett’s.
While raising their family, Jesse and Pearl began their journey in community activism, encouraging and registering African Americans in their local community to vote, paying homage to his late grandfather and slain civil rights activist, Lamar “Uncle Dittney” Smith. As an activist, Jesse also traveled with fellow activist, Mr. John Simmons to Jackson, MS, to meet with Medger Evers to discuss the political and social state of the Black community in Picayune. Later in life, Jesse and Pearl were awarded the Key to the City of Picayune for their efforts. He was a member of the Prince Hall Freemasonry, NAACP, and American Legion Post 244 in Picayune, MS.
After rededicating his life to Christ as an older adult, Jesse became known in his community for being a member of the Board of Trustees at Bethlehem Baptist Church, where he was a faithful member under the leadership of Rev. Louis Thomas. He was also a member of Pleasant Valley Baptist Church in Picayune, MS, where he was a member of the men’s chorus.
Those who knew Jesse may remember his deep belly laughs, radiant smile, long-winded stories and tales, and his love for God, family, fishing, food, and football (Dallas Cowboys). He was one of a kind and will be deeply missed by his family and friends, who affectionately remember him as “Pops,” “Pots,” “PawPaw,” “Mr. Jesse,” and “Mr. J.”
Jesse James Johnson Sr. passed away in his home in Clinton, Utah, surrounded by his family on March 22, 2022, at the age of 95. Jesse is survived by his dedicated and devoted wife, Pearl Beatrice Johnson. He has six children Alice Pearl Winston, Jackson, MS, Jessie Ann Womack, Brookhaven, MS, Willie Lewis Coleman (Deceased), Barbara Ann Harris (Dan), Mobile, AL, Jesse James Johnson Jr. (Gaynell), Pass Christian, MS, Janice Marie Johnson, Sunset, UT, and Glory Johnson-Stanton (Calvin), Clinton, UT, one Goddaughter, Ann Meyers (Eddie), Picayune, MS, an older brother, JB Johnson (Deceased), his younger siblings, Floyd Johnson (Deceased), Ellis Johnson Jr., Chicago, IL, Alma Ree Pittman, Union Church, MS, and Joanne Freeman, Union Church, MS. He has seventeen grandchildren and twenty-two great-grandchildren.
Jesse had many people whom he called “friends.”
Visitation will be held Friday, April 1, 2022, from 11:00 a.m. to 1:00 p.m. Funeral service follows promptly at Bethlehem Baptist Church. Pastor Louis Thomas will be the officiant.
Interment will be in the Picayune Cemetery with Military Honors.
Entrusted to Brown’s Funeral Home