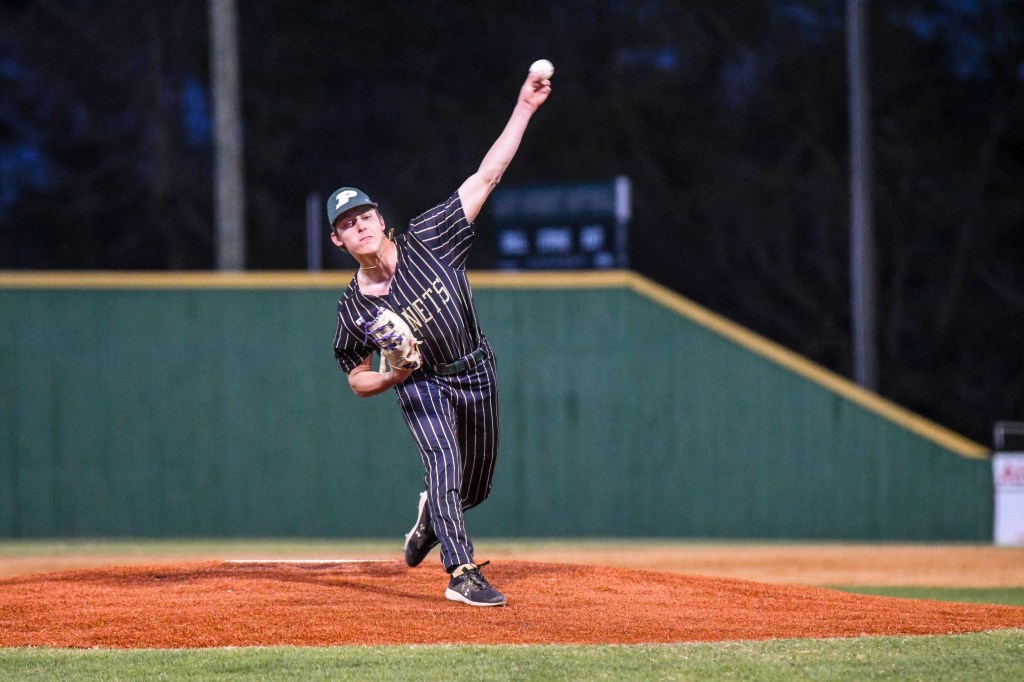 On Friday the Poplarville Hornets baseball team showed no mercy in the team’s 18-0 win over district opponent the Lawrence County Cougars. The Hornets are riding on a four game winning streak with 14-3 record (2-2 in district) overall.

Friday night’s game featured a lot of base runs and Cougars errors that turned into scores for the Hornets.

In the bottom of the first, with the bases loaded with Hornets, Zackary Smith walked after receiving his fourth ball. That put Poplarville up 1-0. Then a Cougars pitching error resulted in Joseph Blakeney stealing home for a 2-0 lead.

At the top of the second, Hornets pitcher Riley Passman wasted no time striking out all three hitters. That defensive play created a huge momentum for the Hornets that followed the team into the following inning.

In the bottom of the second, the Hornets scored seven runs. Their bases were loaded and another pitching error by the Cougars allowed Passman to steal home. The Cougars made another error and that allowed Blakeney to score. With the lead at 4-0 the Cougars’ pitching errors were fixed but that didn’t stop the Hornets from scoring. Preston Smith connected with a pitch and provided a double RBI, then Brock Sheppard followed with a single RBI. The Hornets final score of this inning ended with Pace’s hit resulting in a double RBI for a 9-0 lead.

At the bottom of the third, the Hornets showed no signs of slowing down. Poplarville scored six more runs in the third inning. Starting off was Pace and his single RBI. Then, with the bases loaded and a fourth ball walked Sheppard for an 11-0 lead. Matt Rogers followed at bat and got a single RBI. Then a Cougars’ error allowed Smith to steal home. Payton Picasso got a single RBI then Passman followed at bat with the team’s last RBI of the inning. The Hornets led 15-0 to close it out.

At the bottom of the fourth, the Hornets scored three runs courtesy of Smith’s single RBI, and Picasso’s double RBI.

Poplarville capped off the night of outstanding offense with great defense at the top of the fifth inning. Pace struck out two hitters and Zack Smith made a fly ball catch to end the game.