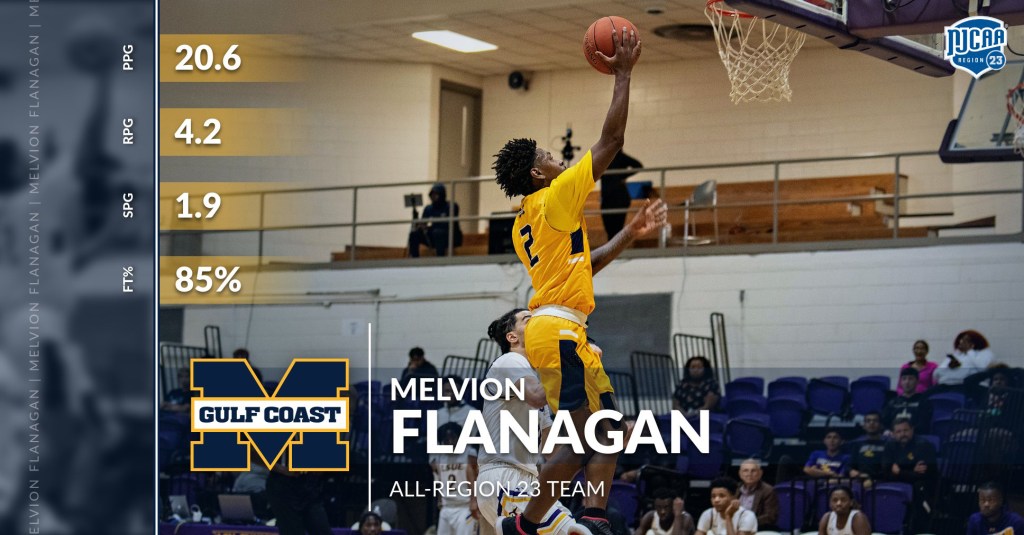 PERKINSTON — Melvion Flanagan added another postseason award to his season and career haul Thursday.
He was named All-NJCAA Region 23 after voting conducted by the coaches in the region.
He was one of 11 players named to the team and one of only four to repeat from last year.
The sophomore guard from Alexandria, La., finished third in the MACCC by averaging 20.6 points, the 21st-best in the NJCAA. He led the league in 3-pointers (79) and was fourth in free-throw percentage (85.0).
He was eighth in steals at 1.9 per game and also grabbed 4.2 rebounds a contest.
Flanagan scored 20 or more points in 17 games, including a stretch of six straight conference games starting with the beginning of the spring semester.
He twice had his season-high in that stretch with 27 at Coahoma and at Hinds.
He registered a season-high four steals against East Central and at Bishop State.
His season-best rebounding effort was eight at Baton Rouge.
Flanagan was named to the All-MACCC South First Team as a freshman and was named to the All-MACCC First Team this season.
For more information on MGCCC’s 10 intercollegiate athletic teams, follow @MGCCCBulldogs on Twitter and MGCCCBulldogs on Facebook, and go to mgcccbulldogs.com.