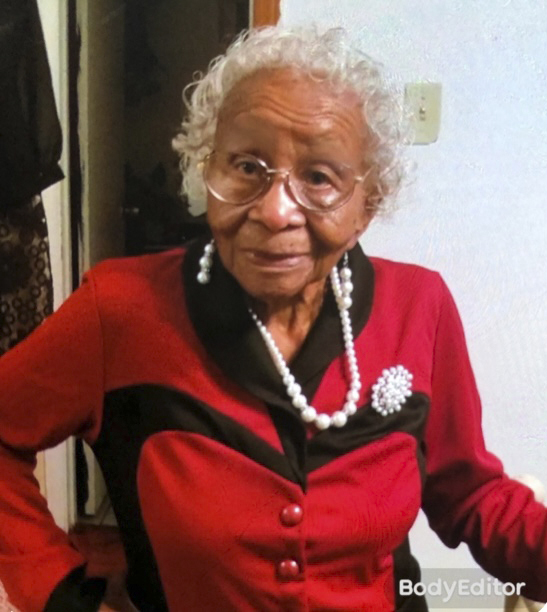 And if I go and prepare a place for you, I will come again, and receive you unto myself; John 14:3
Sister Erma Lee Carter Griffin was born on December 20, 1924, to the late Will and Ruby Carter in Logtown, MS. On Tuesday, February 22, 2022, God called one of his strong and faithful servant home at the age of 97.
Sister Erma was educated at Booker T. Washington High School and attended Delgado Community College in New Orleans, LA. She was employed at Mercy Hospital in New Orleans, LA, for several years and worked a second job at Home Health Services in Metairie, Louisiana until she retired.
Sister Erma Lee was united in holy matrimony to Willie Griffin, Sr. on August 9, 1947. To this union only one son was born, Willie Griffin Jr. She loved and adored her son. She became a Den mother of the Club C Scout Troop #126 and #475. She and her family lived in a neighborhood of New Orleans called, “Hollygrove “where everyone loved and looked out for her, calling her Mrs. Griffin.
Sister Erma was a faithful member of Stronger Hope Baptist Church for many years and served in several capabilities such as Sunday School teacher, mission committee, and she helped with the communion. She was also a member of the Eastern Star.
Due to her health issues, Sister Erma moved in to live with her great niece and nephew, Frances and Ozie O’Neal, who took care of her for over 8 years, until her demise. Erma was a wonderful woman who loved and lived life to the fullest. She loved traveling and spending time with family and friends. Erma was always there to brighten the lives of others. “To know her was to love her”.
Sister Erma was preceded in death by her parents Will and Ruby Carter, her husband Willie Griffin, Sr., sisters: Christena Brown and Calvina Bowens, brothers: Leander Carter, Willie Lee Carter, Robert (Candy) Carter, Alton (Bay) Carter, Larry Carter, Melvin Young and Arian Robertson.
She leaves to cherish her memories, her son, Willie Griffin, Jr. and grandson, Keiane (Tyrina) Griffin, two granddaughters: Aries Robertson and Montellica Johnson, five great-grandchildren: Keinoy Griffin, Keyon Griffin, Deshay Dothard, Legacy Dothard, Kevion Ford, four brothers: Bobby ( DeLisa-L) Carter, James Acker, Oscar Carter, and Darrow Carter, two sisters: Rene Barney and Theresa Carter, and a host of relatives, friends, nieces, nephews, and cousins. She will truly be missed.
Funeral service will be held at Stronger Hope Baptist Church, 2401 South Galvez Street, New Orleans, La., March 3, 2022, at 10:00 am. Visitation is from 9:00 a.m.—10:00 a.m. Rev. Nicholas K. Derouen will officiate the service. Interment will be in Picayune Cemetery, Picayune, MS.
Entrusted Browns Funeral Home.