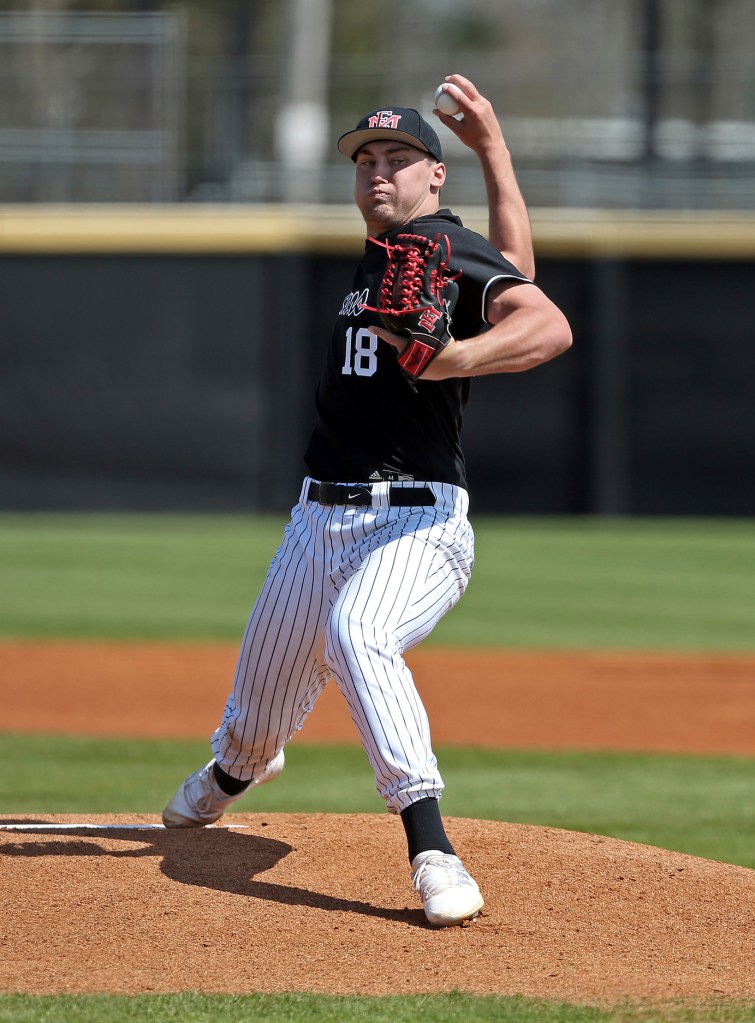 SUMMIT — The Lions of East Mississippi Community College maintained their first-place tie in the MACCC baseball standings by sweeping their third straight conference opponent with 13-0 and 4-2 wins at Southwest Mississippi during Saturday’s league action.

Having received votes in last week’s NJCAA Division I baseball poll, the EMCC Lions are now tied with nationally third-ranked Pearl River atop the MACCC standings with identical 7-1 conference marks.

During Saturday’s scheduled nine-inning opener at Southwest, the Lions scored during each of the first four innings with five-run bursts in the third and fourth innings. Trey Trosclair’s two-run single in the first was followed by Ethan Medlin’s two-out solo home run – his second of the year – a frame later to give the visitors an early 3-0 lead against SMCC starting pitcher Jace Ochoa.

With EMCC starting pitcher Kylan Stepter holding the Bears in check by retiring the first six batters and then leaving the bases loaded in the third with the help of a double play, the Lions broke open the contest by scoring five runs in the third and fourth innings to bring the run rule into effect after five innings. They batted around in the third and scored all five runs with two outs. Hunter French’s bases-clearing triple was the big blow in the inning. EMCC then hit through the order in the fourth with three extra-base hits, including a two-run homer by Trosclair – his third of the season – and an RBI double by French.

Stepter allowed just a third-inning leadoff single with a strikeout and three walks over four innings to improve to 2-1 on the year. Grant Johnson closed out EMCC’s two-hit, run-rule shutout by working the fifth inning.

Trosclair powered the Lions’ 13-hit attack in the opener with a 3-for-4 effort at the plate with four runs batted in and two runs scored. French also drove home four runs with two extra-base hits in three at-bats. Medlin and Coby Holmes added two hits apiece in the shutout victory.

The seven-inning nightcap featured a pitchers’ duel between EMCC’s Cade Davis and Braxton Cooksey of Southwest. After the Lions capitalized on three first-inning walks with run-scoring singles by Beau Bates and David Dickerson, the Bears cut EMCC’s early 2-0 lead in half with Brady Wilson’s solo home run in the bottom half of the opening frame.

Following three scoreless innings by both teams, the Lions manufactured solo runs in the fifth and sixth innings by getting their leadoff batters on base. Wesley Sides opened the fifth with a double and scored on Trosclair’s sacrifice fly. Holmes then walked to lead off the sixth, stole second and was bunted to third before stealing home to make it a 4-1 game.

After Davis gave way to Blayze Berry on the mound, the Bears had an opportunity in the bottom of the seventh. Following an infield error and a single up the middle to lead off the inning, Hayden Barrett’s sacrifice bunt attempt was caught by Sides and turned into a double play at first base to thwart Southwest’s rally attempt.

Davis scattered four hits with five strikeouts and a walk over six innings to improve to 2-1 on the season. Berry earned his second save of the year pitching a scoreless seventh inning.

With just 11 hits between the two teams in the second game, Sides led the way for EMCC with a 2-for-4 outing at the plate.