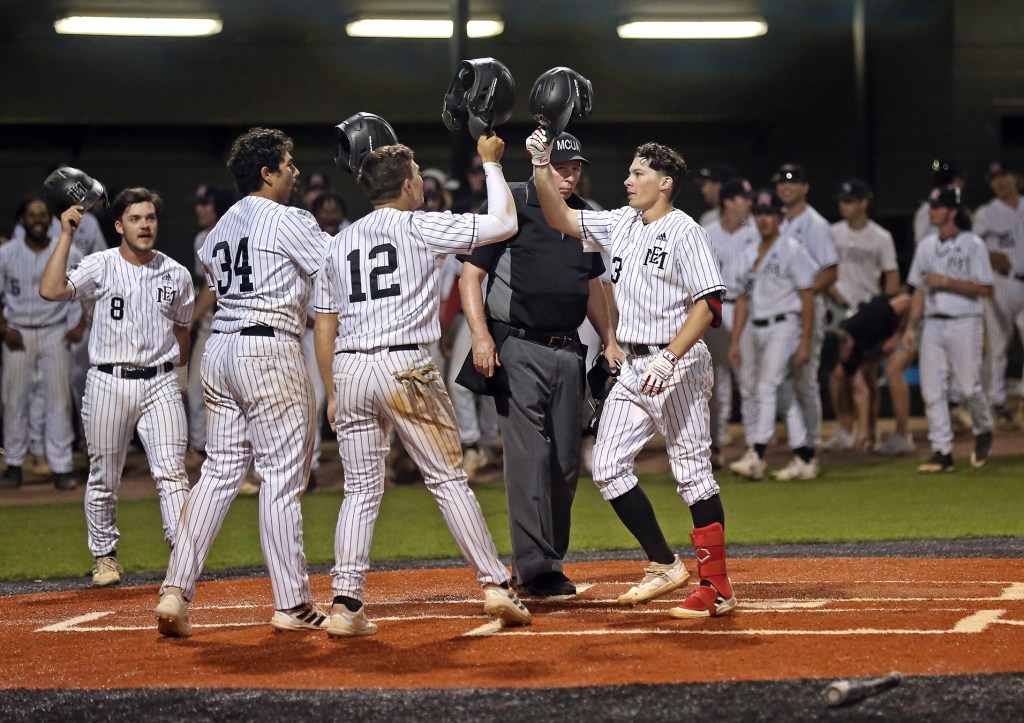 With their fourth consecutive doubleheader sweep in conference play, the EMCC Lions improved to a league-best 9-1 in MACCC action and 14-9 overall on the year. Holding a one-game lead over nationally top-ranked Pearl River (20-6, 8-2) in the current league standings, East Mississippi now sets its sights on taking on the PRCC Wildcats in an early-season marquee matchup slated for Saturday (April 2) in Poplarville.

The Lions got on the board in the third inning by plating three runs off ICC starting pitcher Brady Davis. Following Hunter French’s leadoff double, EMCC cut the deficit to 10-3 on a run-scoring single by Blayze Berry and Beau Bates’ two-run triple.

The two teams traded solo runs in the fourth and fifth innings. EMCC’s tallies came on a sacrifice fly by Ethan Medlin in the fourth and Bates’ leadoff homer the next inning to tie him with Wesley Sides for the team lead in home runs with six on the year.

After Verdung’s two-run homer – his second of the game – in the top of the sixth, the Indians owned a 14-5 lead when Davis exited the game to give way to the ICC bullpen. The Lions responded by batting around in the bottom half of the sixth to score six runs and jump right back into the scheduled nine-inning contest. Medlin’s three-run blast was followed by a Kade Shannon sacrifice fly and consecutive RBI singles from Will Crawford and Holmes.

While EMCC continued to chip away at Itawamba’s once-sizable lead, Lion pitchers Jonah Posey and Andrew Lewis combined to hold Itawamba scoreless during the last three innings after the Indians plated runs during each of their first six at-bats. The Lions’ initial comeback win of the day was set up by a three-run seventh inning that tied the game at 14-14. Medlin’s leadoff homer – his second in as many at-bats and fourth of the year – was followed by two more EMCC runs to knot the score heading to the eighth inning.

After Posey struck out the side in the seventh, he gave way to Lewis in the eighth after a pair of ICC batters reached base to begin the inning. As EMCC’s sixth pitcher of the contest, Lewis promptly induced back-to-back force outs at third base and then ended Itawamba’s potential threat with a strikeout.

In the bottom half of the eighth, Holmes capped a 4-for-5 outing at the plate by leading off the inning with a solo shot off Verdung to give the Lions their first lead of the game and result in the first of two game-winning homers on the day for EMCC’s freshman second baseman.

The Lions’ improbable opening-game comeback from 10 runs down in the third inning and nine runs down in the sixth did not materialize, however, without more drama in the top of the ninth. Following Terris Meeks’ one-out triple, Itawamba loaded the bases on consecutive walks to Eli Hancock and Drew Capobianco. Lewis pitched out of the bases-loaded jam with a strikeout and by getting Verdung – ICC’s hitting star of the game – to ground into a game-ending force out at third. The completion of EMCC’s first comeback of the day earned the Snellville, Ga., native his second win of the year.

With both teams combining for 29 runs on 35 hits, while using 10 different pitchers between them during the game, the Lions had six players with multiple-hit games in the opener. Along with Holmes’ four-hit effort, Berry reached base safely during all six plate appearances with three singles and three walks. Medlin drove in five runs with his pair of homers and a sacrifice fly, while Sides, Bates and Crawford all added two hits apiece to contribute to EMCC’s 17-hit attack in game one.

ICC’s Verdung enjoyed a stellar performance at the plate in the opener by going 5-for-6 with two homers, a pair of doubles and seven runs batted in.

Unlike the opening-game slugfest, the seven-inning nightcap featured a pitchers’ duel between Berry and ICC’s Roe Ketchum, who both threw complete games.

The Indians again struck first in the second game by pushing across two runs in the second inning on five singles. Drew Capobianco’s two-out, two-run hit staked Ketchum to the early 2-0 lead.

ICC’s sophomore left-hander settled in to retire the first 13 batters he faced until consecutive one-out singles by Trey Trosclair and Holmes helped load the bases for EMCC in the fifth inning. Ketchum pitched out of the jam with a strikeout and a line out to third to keep the Lions off the scoreboard.

After the visitors extended their lead to 3-0 on Meeks’ solo home run in the top of the sixth, the Lions again came through in the clutch during their final at-bat. With Medlin and Sides getting on base via a hit-by-pitch and a walk, respectively, Trosclair delivered a two-out RBI single to get EMCC on the board and set the stage for Holmes’ repeat heroics. The Saraland, Ala., native produced again with a go-ahead, three-run homer off Ketchum.

With the lead now in hand, Berry returned to the mound for the Lions and worked a 1-2-3 top of the seventh with a pair of strikeouts and a ground out. The UAB signee out of Columbus’ Heritage Academy recorded his second win of the season by scattering six hits to go along with six strikeouts and just one walk.

Holmes and Trosclair accounted for EMCC’s four total hits in the nightcap with two hits apiece. Holmes finished the day going 6-for-8 at the plate with his pair of game-winning homers – his second and third of the year – plus five RBIs and three runs scored.