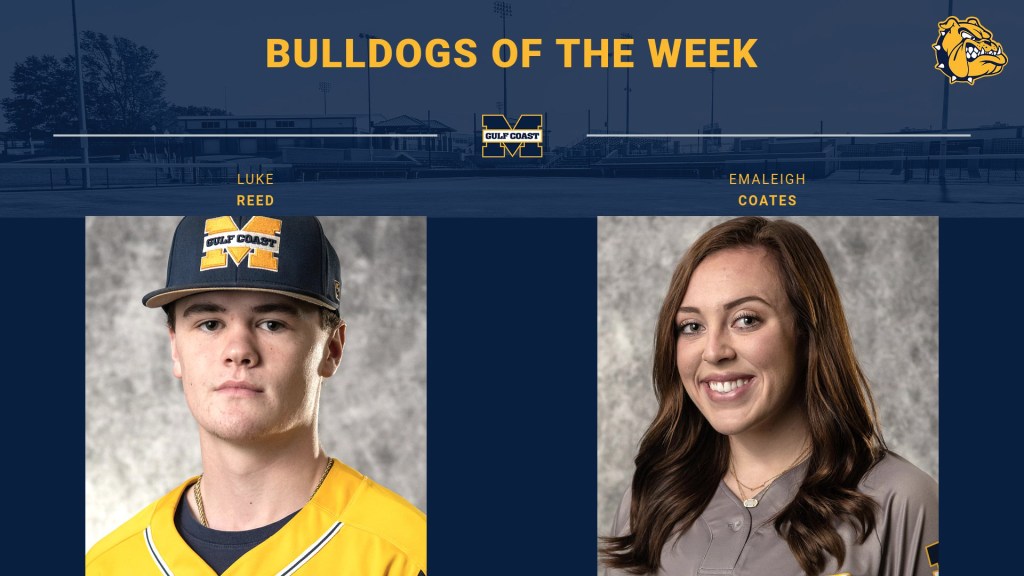 PERKINSTON — Emaleigh Coates and Luke Reed have been named Bulldogs of the Week for March 7-13.

Coates, a sophomore pitcher/third baseman from Lucedale, struck out 13 in a dominating 7-1 win at Northeast Mississippi. She gave up just four hits and four walks. She also went 3-for-7 with a double and an RBI in the doubleheader.

Reed, a sophomore right-hander from Louisville, Ky., was dazzling in a 3-0 win over Northeast Mississippi. He struck out 11 and allowed just two hits and a walk, needing just 87 pitches for the shutout.

Jovi Jones, a freshman from Batesville, went 5-for-7 in a doubleheader split at Northeast Mississippi to open the MACCC schedule. She went 4-for-4 with an RBI in a 7-1 win in Game 2.

Anderson Dulaney, a sophomore from Long Beach, won all four matches during a 2-0 week for the Bulldogs. He and Paul Gayk teamed to win both No. 2 doubles matches, and he won No. 4 singles against Meridian and stepped up to win No. 2 singles against Northeast.

Hayden Hensarling, a freshman from Ocean Springs, went 3-1 on the courts last week. She helped pick up the only point against Meridian, winning her No. 2 doubles match, and lost her No. 3 singles match in a third-set tiebreaker. She swept to two wins against Northeast, dropping only one game in three sets.

Ethan Trouth, a sophomore from Sutton Coldfield, England, shot 1-under to finish second at the East Central Invitational at Dancing Rabbit Golf Course in Philadelphia.