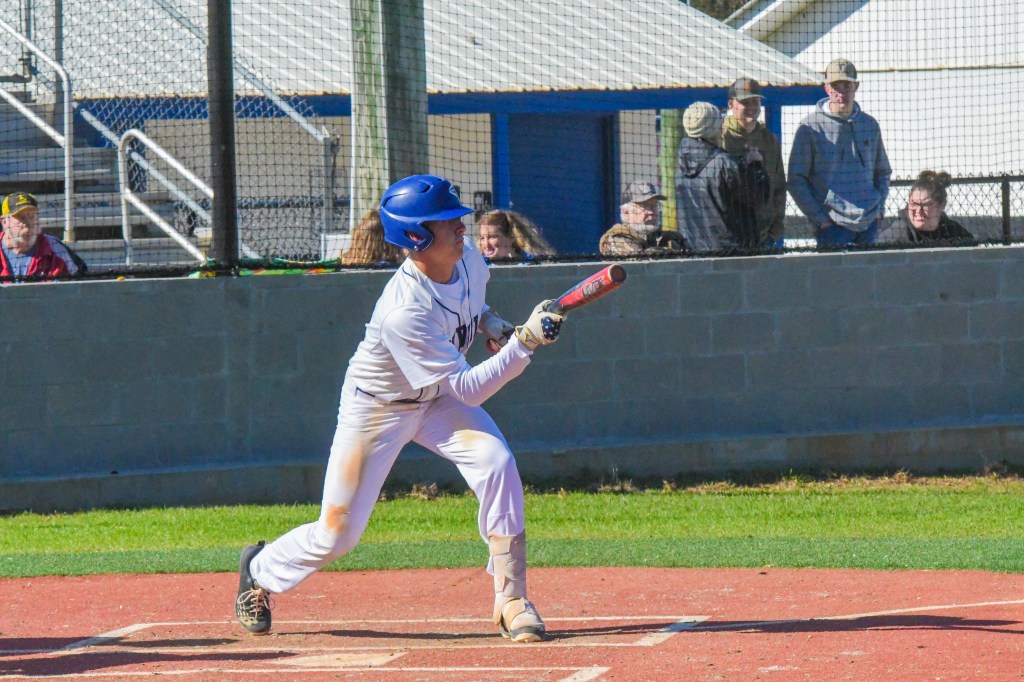 Hunter Brunson getting ready to bunt a Braves pitch during the Blues Devils 10-7 win on Saturday.

Over the weekend, the Pearl River Central Blue Devils baseball team jumped to 6-6 on the year after taking down the (7-2) South Jones Braves with a score of 10-7.

The Blue Devils captured the win with strong offense and by scoring at least one run in each inning.

In the bottom of the first, the Blue Devils led 3-0 courtesy of a Jared Dickens double, a single run from Noland Walther and a home base steal from Caleb Dyess.

In the bottom of the second, Walters’ base hit got him on second base and allowed Heath Brunson to double home for a 4-0 lead.

At the top of the third, the Blue Devils allowed the Braves one run, and at the bottom of the inning PRC answered by scoring three more runs. Chis Hart’s bunt gave Tyce Yarborough a home base run. Then, the Blue Devils worked the plate by putting two runners on base. Xion Lockhart was on second, and Hart was on first. Dickens base hit put him on second base and allowed both Lockhart and Hart to reach home. With two outs, the Blue Devils now led 7-1.

At the top of the fourth the Braves finally made some noise scoring five runs and having bases loaded on two different occasions. This shrunk the Blue Devils lead to 8-6.

In the remaining inning the Blue Devils did just enough offensively and defensively to hold on to the lead, allowing only one run in the sixth inning. In the fifth and sixth innings the Blue Devils scored one run, first by Dickens stealing home, then by a bunt by BJ Bellelo, allowing Hunter Brunson to score from third.

Statistics: Wesley Gardner had two RBI’s and Bellelo, Hart, Walther and Jacob Stockstill had one RBI. As a team, the Blue devils had 36 plate appearances with seven hits, and they had a total of nine stolen bases.