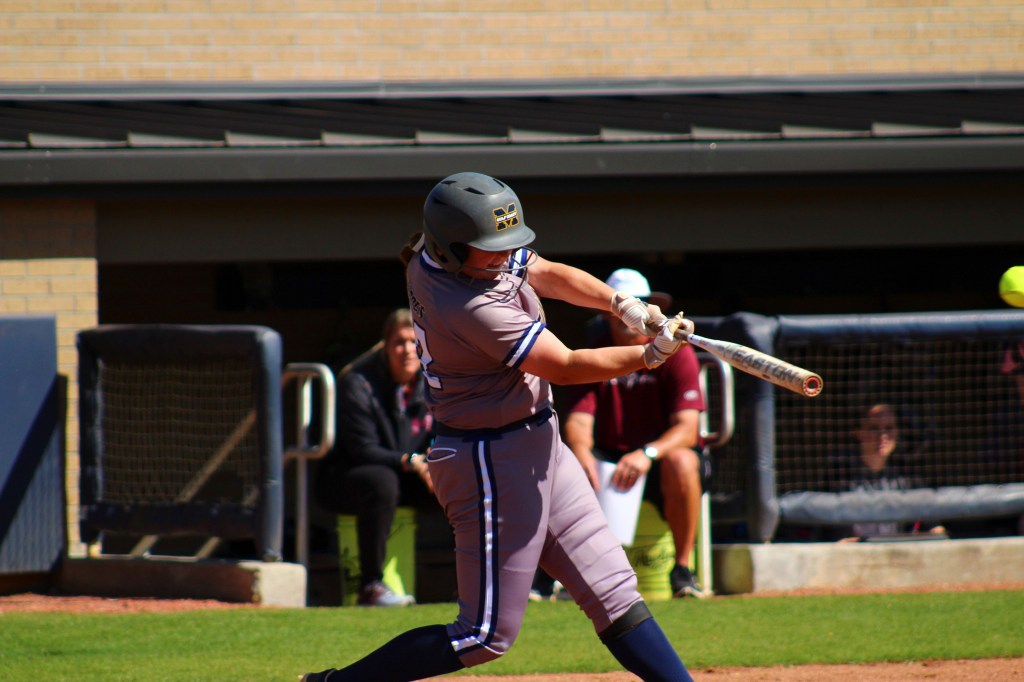 PERKINSTON — K.K. Agner has been in a little bit of a funk for the past few weeks. It’s safe to say that spell has been snapped.

Agner hit home runs in three consecutive at-bats to power No. 18 Mississippi Gulf Coast to a sweep of Hinds on Wednesday at Ross-Smith Field. Her grand slam ended the first game 12-4 in the opener, and her two solo home runs were all Emaleigh Coates needed in a 5-1 in Game 2.

“I’ve been in the cages every night for about two hours hitting, trying to get myself back together,” Agner said. “All I was trying to do for that first one was do something for my team.”

The Bulldogs got their third doubleheader sweep of the season, and they’ve won five of six. They are 14-13 overall, back over .500 for the first time since the ninth game of the season. They’re 6-2 in MACCC play.

Gulf Coast trailed the opener 3-0 when Emaleigh Coates (So., Lucedale/George County) came to the plate with the bases loaded in the third. She launched a homer just over the left corner of the batter’s eye for an instant lead.

Hinds tied it in the fourth, but the Bulldogs took a 5-4 lead in the bottom of the inning on a bases-loaded double play.

Grace Allgood (So., Hurley/East Central) had a sacrifice fly in the fifth, before Kristian Jones (So., Southaven/DeSoto Central) drew a bases-loaded walk. Jovi Jones (Fr., Batesville/Magnolia Heights) followed with an RBI infield single before Agner yanked a no-doubter on the soccer field beyond the left-field fence.

“She’s the straw that stirs the drink, her and Kristian Jones,” Gulf Coast coach David Kuhn said. “It’s nice when both of them are hitting, but when one of them is hitting we’ve got a great chance. K.K. came through big today.”

Agner got home runs seven and eight on the season her first two times up in the second game. She went yard in the first and fourth innings for a 2-0 lead.

Hinds scored once in the sixth, but Abbott Stafford (So., Glenmora, La./Glenmora) answered with an RBI single in the bottom of the inning. Alyssia Little (So., Brandon/Brandon) had an RBI fielder’s choice, and another run scored on a wild pitch to make for the final margin.

Coates struck out 10 and walked just one in her fourth straight eye-popping start. Adding in a two-inning relief appearance. She’s struck out 50 and walked eight in her last 30 innings.

“I think it’s a fourth-straight dominant outing,” Kuhn said. “She had a grand slam in the first game, a sac fly RBI in the second. She’s doing well in all phases of the game, pitching, hitting and defense.”

Gulf Coast is off this weekend and will return to action against archrival Pearl River on Tuesday. First pitch in the doubleheader at Poplarville will be at 4 p.m.