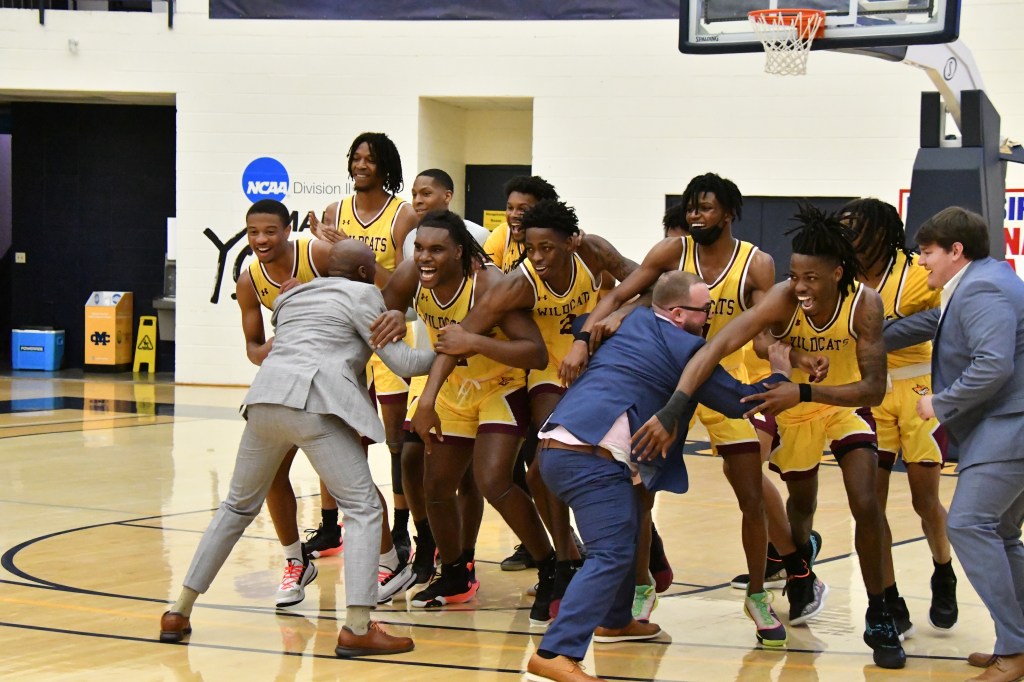 HUTCHINSON, Kan. — The 17-seed Pearl River men’s basketball team wrapped up its first practice from “Hutch” Saturday as they get ready to take on Moberly Area Monday at 10 a.m. in the NJCAA Tournament.

This season marks the third time that the Wildcats have earned an appearance in the tournament but is just the second time PRCC has made the trip after the 2019-20 season ended due to COVID-19.

“This time I recognized a few of the restaurants coming in, and I recognized the gym that we practiced in last time,” he said. “It’s not as new as it was three years ago. Now I know the message to give the team, and I know what to look forward to.”

ABOUT THE GREYHOUNDS
Moberly Area clinched the Region 16 championship to earn a berth in the NJCAA Tournament and was given the No. 16 seed for their efforts.

The Greyhounds have a 27-6 record and are riding an 11-game win streak into the tournament. They currently rank 17th in the NJCAA in points per game, scoring 86.1 per game.

Sincere Parker leads the team in scoring, bringing in 21.8 points per game. Tyren Moore and Michael Thomas round out those in double figures with 12.9 and 11.2 ppg, respectively.

Center Jimmy Bell leads the team in rebounding, hauling in 9.2 per game. Parker is second with 6.1.

ABOUT THE WILDCATS
Pearl River punched its ticket to the big dance after cruising through the Region 23 tournament.

The Wildcats are currently the second-best defensive team in the country as opponents score just 56.5 points per game against them. In field goal percentage, Pearl River is first in the nation, holding teams to 35.6 percent shooting.

The Wildcats have been led by the play of Jaronn Wilkens (Biloxi). The sophomore leads the team in both points and rebounds with 12.4 and 5.6, respectively. Cameron Brown is second on the team in scoring, averaging 10.9 points.

In a tournament filled with tough teams, Oney feels that the Wildcats have just as good of a chance as anyone.

“Last time it took us the first 10 minutes of the first half to realize that we deserved to be here,” he said. “Hopefully, it doesn’t take us that long for us to play our game. After that, it’s just a matter of doing all the things that we did to get here. All of the teams here are really good. Out of 24 teams that are here, any of them have a chance to win this thing. It’s just a matter of what teams can start playing their game first.”

The Wildcats will do what has led them all year, using stellar defense to create offense.

“Offensively, we’ll be similar,” Oney said. “The beauty is that defense does travel. I don’t know how many shots that we’ll make, but I know that we’re going to defend, rebound and give ourselves a chance to win. That’s really all you can ask for at this time of the year.

The winner of Monday’s contest moves on to face 1-seed Salt Lake who earned a first-round bye. Tipoff for that game is set for Tuesday at 2 p.m.

From there, the quarterfinals game is at noon Thursday, the semifinals game is set for Friday at 5 p.m. and the championship game is Saturday at 6 p.m.

HOW TO WATCH
Every game this year will be streamed at NJCAA.com/network as part of their subscription plan.

To keep up with the entire tournament, bookmark the NJCAA’s Men’s Championship Central page at NJCAA.org.