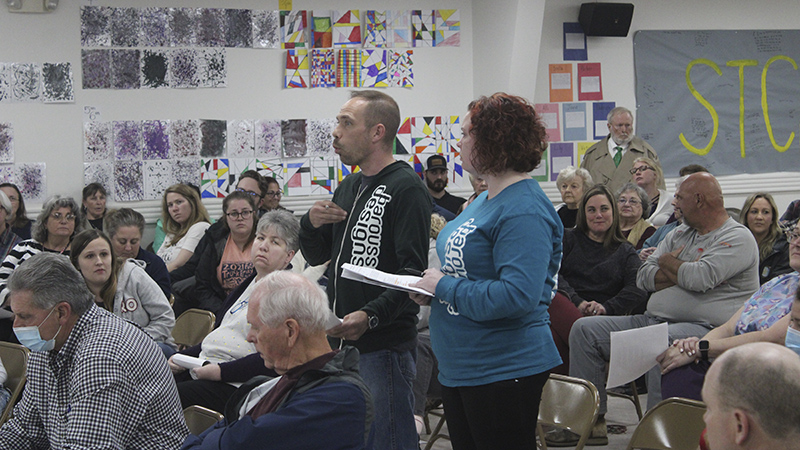 From left, Matt and Marlana Barousse express their discontent with the recent decision to close the St. Charles Borromeo Catholic School in Picayune. Photo by David Thornton Jr.

At the end of this school year, St. Charles Borromeo Catholic School will close, to the umbrage of parents of the children who attend.

Wednesday evening representatives of St. Charles Burromeo Catholic School held a meeting to announce the closure of the church’s school and give families a chance to ask questions. During the meeting it was said that the closure, set  for the end of this school year, was announced via email to all the parents and staff members. That email was sent out on Jan. 27. The decision to close the school was made in October of 2021 by the seven School Advisory Counsel and Father Bernard J. Papania of St. Charles Burromeo Catholic Church.

During Wednesday’s meeting attendees expressed their outrage about the late notification and lack of answers to their questions.

Papania said the school has faced competition from Heritage Christian Academy since its opening in 2014. During the 2020-21 school year, St. Charles Borromeo was spending $11,283 per student, the highest compared to the past eight years. St. Charles Burromeo Catholic Church has seen a decrease in income as well, according to the printed information. The church saw a short rise of income in 2016 after receiving a $200,000 donation from an unnamed source for the church’s building. Total income was estimated to be more than $800,000 that year. But since then, revenue has dropped to an estimated $600,000 in 2017 and is currently estimated at less than $700,000.

“Since COVID it’s been going down,” said Papania.

Bernard also discussed the difficulties the school and church faced over the years and the attempted discussions to try and improve “our product.”

“One of the elements we’ve been up against, just or unjust, is that fundamentally a large number of people are not supporting the school,” said Papania.

The school has had three principals over the past eight years and according to Papania they’ve had the lowest tuition rate and student numbers in the diocese. He also touched on marketing problems due to a lack of school recognition.

“The building we have, some people didn’t know there was a school here, they never saw it as a school.” said Papania.

Matt Barousse is a local business owner who has two children attending the school.

“I’m very shocked and confused by this,” said Barousse.

Barousse said he appreciates the current Principal Jennifer Seymour for all she’s done for the school and said it appeared the school was in an upward trend. He added that the previous administration before Seymour, “Ran this thing to the ground.”

Several parents agreed with his statement.

“Sending our kids to another Catholic school is just out of the question,” he said.

Barousse said Bernard’s statement about the school’s impact on the community was false, saying the school has been an asset.

“It’s been a positive, I don’t see a negative there.”

Barousse asked who was consulted on the decision to close the school and if the Advisory Boards made any decisions to address Papania’s concerns.

When asked if there was a vote to close the school, Papania said “there wasn’t a vote it was a conversation.”

When asked what level of tuition would be needed to keep the school open for 100 students, Papania said $5,800. Kristie Gittings, who has children in the school, said that that amount was out of reach.

“You can’t just say we need to pay more cause others pay more, that is not fair to everybody in this room,” said Gitting. “I think I speak for everybody in this room when I say we feel so betrayed and ambushed and you have no idea what it was like to tell my child that you did this because you gave up on us, and you didn’t give us a chance… I don’t care what it cost St. Charles is home for (Gitting’s son).”

When asked by another parent if the decision was set in stone,

Papania said, “The decision has been made.”

Connie Boquet inquired about a rumor that Papania was personally offered money by an unnamed source to keep the school open, but refused. Bernard responded saying he did not refuse money from anyone.

He added “I never felt I was offered money at that moment.”

Ciarra Hinson is a First Grade teacher at the school who also has children enrolled there. She said she didn’t find out about the closure until the morning when everyone else found out.

“We had to collect ourselves, I had to go to my car and collect my face because I still had to teach my students,” said Hinson.

After the meeting, many parents and staff members felt their questions left unanswered. Kristie Gittings said she never got a clear answer as to what information Papania presented to the Bishop to close the school.

“Because this was done behind our backs. That is what we as parents all want to know and that was left unanswered,” said Gittings.

She added she expects to see a petition formed to remove Papania.

Hinson said she never got a straight answer as to why the staff weren’t notified back in October.

“From October to February there was not one mention of it to us, we always claim that our school is a family. That is one of things we pride our selves on. Family doesn’t do that. And I don’t think he ever gave us a straight answer… it was a lot of dancing around.” said Hinson.